A typical weekday morning finds me flitting from one end of my apartment to the other, frantically throwing on gym clothes, packing my work outfit into a tote bag and assembling my lunch. But last week, I started my days differently: by sitting down on the couch and wrapping a high-tech headband around my forehead. It would read my brain activity as I meditated.

I was at first skeptical of Muse, the $299 meditation headband that tracks its wearer’s ability to focus their mind on the present moment. Why would anyone shell out hundreds for help with meditation, a practice that can easily be carried out for free? Then again, pricey fitness trackers have become commonplace with the recent cultural shift toward fitness-focused lifestyles. Now that meditation is poised to enter the mainstream, who is to say brain-sensing wearables cannot become as popular as Fitbits?

Muse first hit the market a year ago, well before the days of boutique meditation studios in Greenwich Village. “Meditation wasn’t really in the mainstream—we were like, ‘Do we talk about this as a ‘brain health’ tool?'” Muse CEO and co-founder Ariel Garten told the Observer. “Then the market became sufficiently educated and aware, and everyone wanted meditation stuff. It’s been amazing watching everybody get onboard.”

The device uses electroencephalography, or EEG, to record the electrical signals sent amongst the neurons in the brain, Ms. Garten, whose background is in neuroscience and psychotherapy, explained. By touching the skin, Muse’s sensors pick up the small voltage changes that happen inside the head, then interpret that data to determine when the mind is focused, and when it is wandering. Then, Muse delivers real-time feedback; through an accompanying smartphone app, the wearer hears audio cues signaling when their thoughts are focused, and when they are astray.

The scientific community is taking Muse seriously. There are 120 research institutions currently running trials with the device, including the Mayo Clinic, where researchers are determining whether Muse can help breast cancer patients reduce their stress during surgery.

But back to my own experiment with Muse. I should start by making clear my own background, or lack thereof, in meditation. Though I attend the occasional group meditation workshop, I do not have a daily meditation practice. Eventually, I would like to have the skills to be able to do it more regularly on my own.

Once Muse was on my head, I connected it to my iPhone via Bluetooth. Then I plugged in my earbuds, opened the Muse app, and started my first three-minute session. (Users can adjust their session length at will.)

To start, Muse calibrated itself by measuring my brain when it was at peak activity. Through my earbuds, a soothing voice instructed me to think of as many different sports as I could, followed by colors. Every subsequent Muse session began with this calibration, though the categories changed.

Finally, the meditation began. Remember those audio cues signaling they brain’s level of focus? They took the form of thunderstorm sounds. When my thoughts began wandering—to the coming workday, to my breakfast options, to how ridiculous I probably looked with the gadget on my head—I heard the storm intensify: thunder clapped, rain poured. Conversely, when I focused my mind on the present moment, the storm lightened up. I even heard birds chirping—Muse’s way of signaling that I’d been focused for a longer-than-usual duration of time.

When the three minutes were up, I got a report that looked not unlike something Fitbit would produce:

As I used Muse more, I encountered what seemed like a fundamental problem: I was focusing so hard on getting a good score, it became impossible to focus my thoughts on the present moment. Instead of quieting my mind, I was trying to count how many bird noises I had heard. My “calm” score went from 39 percent down to 19.

According to Ms. Garten, my stress and the resulting low scores were “completely part of the lesson.” Meditation is meant to be goal-less—a frustrating concept for a goal-driven person such as myself. I needed to see that the more I actively pressured myself to earn a high score, the less likely I would be to get one.

“Trying to overachieve is actually causing the frustration and stress in [your] life,” Ms. Garten pointed out. “When [you] just let go of the outcome—just exist in the moment—everything is O.K.”

Muse made meditation less intimidating. Instead of waiting to attend a guided group session, I can now confidently incorporate it into my own daily routine.

I might not be a meditation master after a week of using Muse, but I have made an important first step, at least according to Ms. Garten: becoming aware of my own mental process, and understanding that it is something I can control—even if I am not fully capable of controlling it yet. 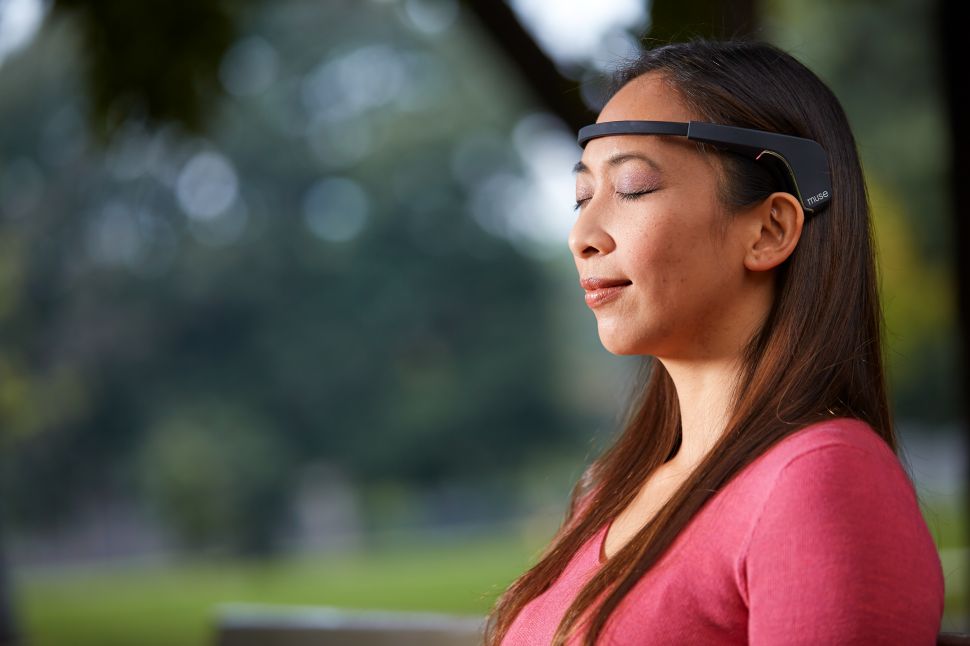