Listen, you divided nation, land of Airline Highways and Hyatt Atriums, Terminal Bars and Barstow thermometers, Grand Coulee Dam and Grand Couteau Levees: You do not heal the wounds of the past by burying the past. Listen, you rusty, rolling, spiked and silvery nation of Lincoln Highways and Lombardi Rest Stops, Ventura Gallerias and Atlanta Taquerias, all of you, fit and fat and tan and wan and living in Rome and Athens and Columbia and Columbus: You don’t even necessarily heal the past—you understand it, you hear it talk, you listen to its echoes of pride, shame and anger; you understand that history is seen through the eyes of 250 million dogs, it is all painted in grays.

You do not heal the wounds of the past by burying the past.

And like dogs, history makes terrible, ugly noises if you ignore it.

North, South, East and West, you live in a nation built on the tears and torn soul of treaties broken. And this: As late as 1827 a resident of New York City could legally own a slave; during the 1863 draft riots, hundreds of African Americans were lynched and burned alive in New York City, your New York City; and a year earlier, Ulysses S. Grant issued General Order Number 11, expelling the Jews from Tennessee, Mississippi and Kentucky. All these things happened in the shadow of the Stars and Stripes, in the name of Stars and Stripes, so do not tell me that you are better than “Sweet Home Alabama.”

Two hundred and fifty-eight thousand American boys dead, their shot-to-pieces uniforms happened to be gray, not blue. The vast majority of these men and boys did not own slaves, they fought because they were offered no choice, they fought because this is what their brothers and their friends and their cousins and their fathers did; the thresher of peer pressure and the fierce no-angel of conscription took many of them away, just like the soon-to-be-bled boys of the First and Second World War, just like the non-fortunate sons who were called to South East Asia. There was no choice, they left behind mothers and fathers and brothers and sisters and sons, and when they died, in nasty and godless ways, they left unborn a million and more.

Now Watergate does not bother me

Does your conscience bother you?

Like most people who came of age electrified by the beautiful lie of punk rock and polished and finessed at the finishing school of white guy college radio, we looked down our long Northern noses at Skynyrd. After all, we knew everything there was to know about the whole wide world (as long as the world looked like us), we all saw the same Wenders films and read all the same Brautigan books and filled our dorm rooms with loud Velvet, we all slouched with St. Marks’ cool and we were certain we were better than “Sweet Home Alabama.” For those of us allied with the shy-boy ska-dancing of murmuring Southern heroes, we had to believe that those who waved the former flag of a slave-owning ex-nation must be reviled. It was simple math, man. They had their Ronnie Van Zant, we had our Ian Mac Culloch.

Do we hate a song because of how a culture has appropriated it?

There are many morons, wife beaters/date rapists/homophobes, who cheer Bruce Springsteen’s “Born in the U.S.A.” for all the wrong reasons. As far as I can tell, those Lynyrd Skynyrd boys didn’t mean any harm, they grew their hair long and hated George Wallace, too (boo boo boo, they sang when his name was invoked). “My people” gave us Kissinger, boo boo boo, as theirs gave us Bull Connor; murderers all, all sides. Now, Watergate does not bother me. Does your conscience bother you? Tell the truth. Yet I shut the door on “Sweet Home Alabama” and about half a dozen other truly fine, dark and deep-riffing Skynyrd songs, because of the flags of hate I presumed those songs had been wrapped in.

And I didn’t know what I was missing. “Sweet Home Alabama” is a very damn fine song with a simple ear-worm melody that shadows other honey-smooth tunes praising the Southland (such as Louis Armstrong’s “Sleepytime Down South” and the sugar-cane-sweet but morally sour “Dusky Stevedore”—Louis recorded that one, too); at the same time “Sweet Home Alabama” cites the manic Delta-via-Muswell Hill pub blues of the Kinks, since the famous melody is nearly identical to Ray and Dave’s “You’re Looking Fine” (this may be a strange coincidence, but I suspect not). Like many of our greatest rock and r&b songs it makes its case without the frippery of a bridge, it just pile drives that riff over and over and gooses it with a pin-up girl sassy counter-riff, and the brassy backing vocals, one-third “Gimme Shelter” and one-third “Walk on the Wild Side” and another third Raelette, make it clear that this ain’t no anti-integration anthem, because the evidence is right there, dammit.

So here we are in the 21st century, we remember the 258,000 dead American boys by doing exactly what Stalin did, tearing down the monuments and renaming the schools and banning the flag they died under; and yes, there is great wisdom in not honoring the hatred and racism of those who led the conscripted, but what of the honorable sons and brothers and fathers given no choice in the matter and sent to graves and wheelchairs? Listen, the fields of our country were dyed red with the blood of over half a million boys, all born under the Stars and Stripes (even if half of them died under the Stars and Bars), do not tear down the monuments—use them to teach. Do not hate boys who died under that flag; do not hate perfectly wonderful rock and roll because it has been hijacked and dyed gray.

The point, underlined by 12 slave-owning presidents and African American men hanged in Union Square, is that you do not bury or rename the past, you throw light on it so we can learn from it, and you honor America’s dead sons (and never-born sons and daughters) from both North and South; and just because a song has been draped in a flag adopted by the gardeners of hatred, do not assume that’s what the song means, do not assume that song can’t ring in your ears, thrill you with it’s coin-rattling arpeggios, make the closed windows of your car vibrate, make your soul sing, and remind you:

Now Watergate does not bother me

Does your conscience bother you? 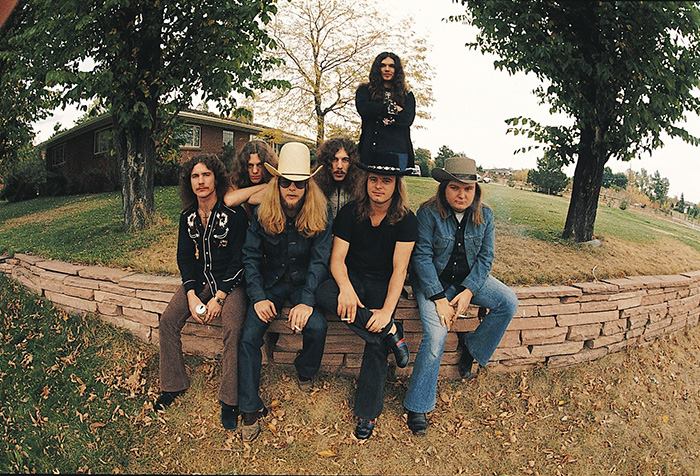