“Hamilton Grange is destined to be a first-class and exclusive residence quarter,” predicted The Real Estate Record and Guide in September 1890.

It was thought that this picturesque area would mimic the East Side, where rows of townhouses reigned, space was running out and land values were high. Tenth Avenue was renamed Amsterdam in 1890 to encourage the uptick. And a subway stop at 145th was in the works.

Mr. De Forest had acquired most of Mr. Hamilton’s land (roughly W. 141st to W. 149th Streets, west of Convent Avenue) and more, divided it into hundreds of lots, and sold or developed them with his son. In 1886, pre-city zoning, he created a 20-year deed restricting new construction to “brick or stone dwellings at least two stories in height.”

That was code for private residences, which was code for unrelated people living under one roof is vulgar, something other ethnicities and races might do. There were limitations on use, too, a condition of sales that were not uncommon throughout the city: no stables, no factories, no bawdy houses and so forth. No manure in my backyard.

By 1895, The Real Estate Record and Guide noted “the better classes of our citizens, well-to-do lawyers, doctors, merchants and brokers” occupied the neighborhoods’ dwellings.

“These people didn’t think they were rich,” Harlem real estate broker Willie Suggs told the Observer. “They were just comfortable. They had servants and lady’s maids and nannies but they didn’t live on Fifth Avenue or Gramercy Park.”

And then, as it does, the bubble burst. The Panic of 1907—that pre-Depression financial crisis, which shut down the Knickerbocker Trust Company and demanded the creation of the Federal Reserve—halted the trajectory of Hamilton Heights.

Construction was just finishing at 453-475 West 141st Street, the last row of speculative townhouses built. The developers—Picken Realty Co., run by three brothers, children of Scottish immigrants—purchased the half-block wide, nearly full-block-long plot on the north side of the street for $216,000 in 1905. Architect John Hauser designed the houses to complement those on the south side in a Beaux-Arts style. In this case, the curved facades alternate in patterns of red brick and stone in the upper stories: A, B, A, B. Decorative features—cartouches, friezes—also alternate. The first stories are limestone.

Interior floor plans alternated, too. But both versions had all the elements any middle-class citizen could desire: a dumbwaiter, a butler’s pantry, a trunk room and a back staircase for servants.

“465 is a very rare house,” said Ms. Suggs of the home she helped sell in 2000 and which is currently listed with Joy Handler of Corcoran for $2.995 million. “The servants’ staircase is intact. It’s like Upstairs/Downstairs.” Note to Downton Abbey fans: you likely missed the 2010 revival of this 1971 show about the two, er, sides of a 1900s-1930s London townhouse. Watch to enhance your appreciation of city life.

‘I have always told people and it’s still true: these are the most spectacular of the styles in Hamilton Heights because they are so darn big,’ said Ms. Suggs. ‘The houses are 18 to 20 feet wide and virtually all of them have a double extension, so they are as long as 90 feet. You’re talking about one big mamma jamma.’

A lady like Clara Picken, No. 465’s first owner, wife of one of the developers, for instance. Like husband George, Clara was a child of immigrants—in her case, from Germany. According to census records, however, the couple never lived in the house. Some sources say it was used as the model to sell the rest of the row, but Clara also owned the house next door ($34,000 for both in 1908), and had tenants in both over the years (in 1910 Frederick Taylor, an insurance man, and his family lived in No. 465). Her sister-in-law owned two others (they lived in No. 457). That reads more like creative financing.

In 1917, the house was sold to her father, Max Weinstein, for $10. Presumably, he, a glove manufacturer and salesman who also never resided in the house, acted as landlord and broker. This wasn’t the only business relationship. George was a partner in Max’s glove company. George’s 1953 obituary in The Brooklyn Daily Eagle deemed him “one of the leading builders in Upper Manhattan, many of the stores and apartments there being erected under his direction.” He was also known for his unsuccessful run for Congress in 1942, losing to Donald O’Toole, the Democratic incumbent.

In 1922, when the likes of Count Basie, W. E. B. Du Bois, George Gershwin, Thurgood Marshall, Paul Robeson, Norman Rockwell and other artists and activists began moving nearby, No. 465 was sold to Dominique and Eugenia Vecchini. Dominique, who arrived from Corsica in 1901 and became a citizen in 1927, was deemed a tourist agent and, later, hotel proprietor. In 1930, eight tenants were recorded at No. 465, including a housekeeper, a bricklayer, a bookkeeper, a knitter, a plumber and a clerk. The five-bedroom home, now essentially a boarding house, was valued at $20,000.

Eugenia sold the house in 1940, the year the D train started running, to Sadie Daisy Jefferson and her family. Lynette McCalla, Sadie’s granddaughter, lived at No. 465 starting around age 3 (1951 or so) with her grandparents, parents, three brothers and the occasional aunt and uncle. She moved out when she married, later returning with her children.
“I still dream about the place,” Ms. McCalla told the Observer, happily recalling parties, cable car tracks and cobblestone streets. “I remember when they took them out. You could slide on them when it rained, when they got wet.”

“The upkeep was too much. There was always something to fix,” added Ms. McCalla. “I looked at the pictures online and saw the changes. It looks beautiful. Bradley opened the back staircases. We had them closed.”

She was referring to Bradley Erickson, a menswear design director who bought the home $425,000 in 2000. “Where can I go for my own front door?” he’d asked his mortgage broker. Windsor Terrace was less convenient, so he went to Harlem, quickly seduced by Hamilton Heights. “The immediate neighborhood is quite beautiful. There are five parks in five blocks.”

Officially the building was considered five apartments and three SROs (this was news to Ms. McCalla), so Mr. Erickson had to get a Certification of No Harassment to return it to its original layout and single-family status. “The beauty of it is that nobody had money. To subdivide, someone threw a deadbolt on a door, threw a stove in a corner,” he said. That made it easy to differentiate between what was original and what was not. Mr. Erickson lived in the house during the year-long renovation, which included new plumbing, new wiring and new bathrooms.

Ms. McCalla laughed when she heard Mr. Erickson found a 1950s jar of preserves and a 1970s can of generic mushrooms on the dumbwaiter tray. “That had to be my grandmother!”

He regrets removing the dumbwaiter, replacing its second-floor stop with a shower. This was the butler’s pantry, used as a bedroom. It connects to the original dining room, now a library, which was painted a salmon color, including over the mahogany, by Ms. McCalla’s uncle and grandfather.
“I always hated that paint,” said Ms. McCalla.

Mr. Erickson said the decision actually preserved the wood. The master bedroom was painted with a faux woodgrain pattern, a luxury that somehow survived.
In 2014, still recovering from an unfortunately timed purchase and renovation of a home on St. Nicholas, Mr. Erickson accepted the third offer (for $2.3 million) to purchase from Sara Henderson, a choice of the brain, not heart. “I wish someone had looked me in the eye and said, ‘you are going to own this huge, gorgeous house for 14 years.’ I would have done the refinancing right,” said Mr. Erickson.

Ms. Henderson continued this process of returning many elements to their original state, particularly on the second floor. Inspiration came from Michael H. Adams’ Harlem, Lost and Found: An Architectural and Social History, 1765-1915, published in 2002. The book names Patrick McNulty, a designer and plaster contractor, as the designer of the parlors of the row houses on this block of 141st and 140th Streets. Mr. McNulty, who lived around the corner on Convent Avenue, was inspired by Marie Antoinette’s boudoir at Fontainebleau, as documented in the parlor at 465 West 140th.

Ms. Henderson took cues from Mr. McNulty when she approached her parlor, which Mr. Erickson had painted white, a nod to a trend set by Stanford White at the end of the century, in combination with fabric panels or stencils mimicking the same. It took three painters two-and-a-half weeks to transform the room. She is now selling due to a personal obligation. 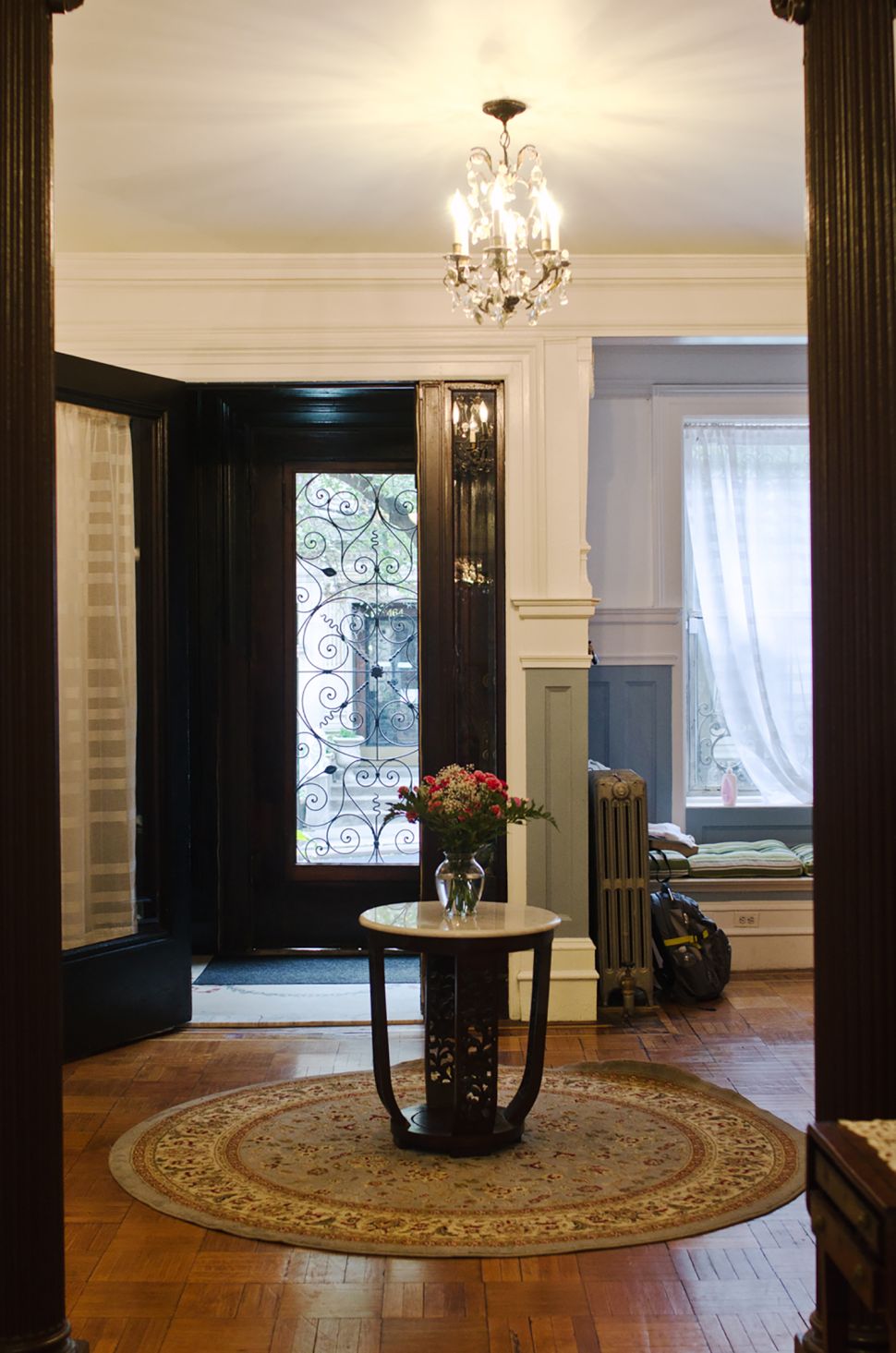