Five months ago I sang the praises of Gorilla Grodd, the 800-pound telepathic CGI gorilla that waltzed into The Flash, as well as straight into my heart. Why? Because…wait did you just ask why an 800-pound telepathic CGI gorilla deserves praise? Oh my Grodd, get help. But if I have to explain, it is because in the never-ending cycle of self-seriousness that is super hero shows, breaking out the CGI gorilla card is not only a breath of fresh air, but proof that The Flash isn’t afraid to acknowledge that comic book lore is ridiculous in every way. And that is also why it is amazing.

So, you can imagine that nothing on this Earth or under any sea could fill me with more joy than the fact that last night’s The Flash introduced King Shark. King Shark, if you didn’t watch, is a motherf*cking 20-foot-tall shark-man hybrid…thing. Yes. So much yes I can’t even contain it. Look at him!

What Supernatural cast member did CW have to secretly murder to get the money to make King Shark? That CGI doesn’t just look great for CW standards, it looks incredible for television standards. There’s so many teeth! The Flash on CW was somehow able to render a massive shark monster that looked 1000% better than Dany’s Neverending Story-looking ass flying away on Drogon. And half of HBO’s budget is spent on the trucks that arrive each morning on David Benioff and Dan Weiss’ front lawns carrying the other half of HBO’s budget.

Anywho! Some backstory. King Shark is a henchman of alternate dimension Earth 2’s Zoom. “Zoom wants you dead,” King Shark says to Barry Allen and…holy shit wait listen to King Shark’s voice. He sounds so cool. Did he eat Optimus Prime? I bet he could. I bet King Shark could eat anyone he wanted.

Barry and King Shark’s confrontation is interrupted by Patty Spivot, who draws her gun and yells “Hey, put him down! Put your hands…fins in the air!” In what world is that what you say when you see a colossal sharkbeast? Amazing. Also, those are clearly arms. It’s honestly a little racist to assume just because someone has a shark head that they also have fins.

Unfortunately, King Shark gets the shit blasted out of him by a returning Harrison Wells, and appears to be quite dead. Executive producer Andrew Kreisberg then continued to stomp on my heart, telling Comic Book Resources “It was just fun for us. Obviously we can’t afford to do an entire King Shark episode so the idea was that he was one of Zoom’s minions and just the latest in the line.”

Um, excuse me, famed producer Andrew Kreisberg? How are you going to say you can’t afford an entire King Shark episode when I am sitting here literally throwing wads of 1-5 dollar bills at my screen? I already started 9 Kickstarters, working on a tenth. Or should I say Finstarters? No, sorry, that’s wrong. That’s just me buying into the overwhelming cultural bias toward shark monsters.

Seriously though, props to The Flash for constantly putting the comic book characters on a screen that have no business ever leaving the page. If the show ever debuts M.O.D.O.K I will, in all seriousness, die from excitement. 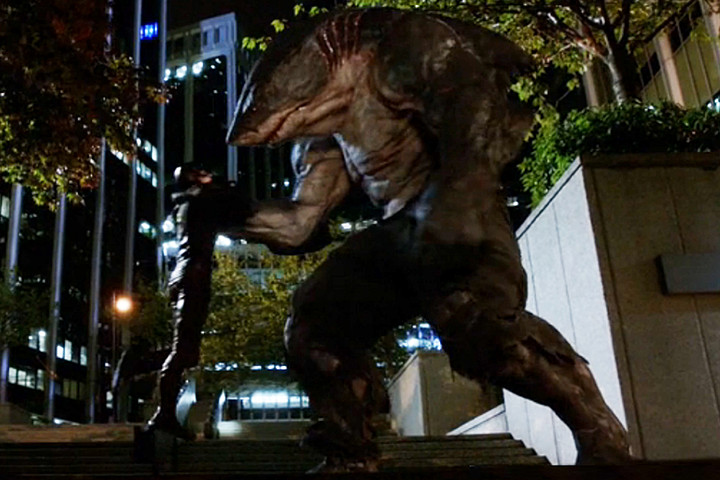