The last time a Republican represented an Assembly district wholly in Brooklyn, Ronald Reagan was president and 2015 was still the year of hover boards and self-tying sneakers.

But State Assembly Democrats are quietly concerned about a Back to the Future scenario: a Republican seizing control of a southern Brooklyn seat that has been held in Democratic hands as long as anyone alive can remember.

“I think it’s going to be a highly competitive race,” said Michael Tobman, a political consultant who has worked on Brooklyn campaigns. “The Republican is formidable.”

The combatants are Democrat Pam Harris, a retired corrections officer and Coney Island activist, and Lucretia Regina-Potter, who has run unsuccessfully for Assembly before. The two rivals are running to replace Alec Brook-Krasny, a Democrat who resigned earlier this year to take a position in the private sector.

Ms. Harris won the Democratic nomination after securing enough support from the local county committeemen who pick nominees for special elections. Ms. Harris did this with the help of elected officials like Councilman Mark Treyger, a Coney Island Democrat, and State Senator Diane Savino, a Democrat who represents portions of Staten Island and Brooklyn. Ms. Harris also had the support of two members of Congress, Jerrold Nadler and Hakeem Jeffries.

But Ms. Harris is in a relatively precarious position. The unconventional district, which ropes in parts of Bay Ridge and Coney Island while skipping neighborhoods in between, is split about evenly between the two areas. Bay Ridge Democrats backed a rival to Ms. Harris, Kate Cucco, who served as Mr. Brook-Krasny’s chief of staff. (Another slice of Bay Ridge is represented by an Assembly Republican, Nicole Malliotakis, but the district is Staten Island-based.)

Ms. Harris is also black, which is notable only because the district is majority white. Were Ms. Harris to win, she would be the only black elected official to represent a majority white seat in New York City, and some longtime observers say they can’t recall a black politician ever winning a majority white district anywhere. The reverse of this scenario, however, has happened before.

“She’d be the first woman of color representing this district. When you’re a first, you have to work very hard,” Mr. Tobman said.

The Democratic Assembly Campaign Committee, the campaign arm of the Assembly Democrats, is well aware of this. They already dispatched a campaign team to the district and are taking the race seriously, sources say. One Democrat estimated Ms. Harris may have to raise six figures to win, a high amount for an Assembly contest.

DACC only assists in races where the Democrat is vulnerable, sources say. Backers of Ms. Cucco quietly complained that DACC wouldn’t be needed to help her. (DACC and Ms. Harris did not return requests for comment.)

Ms. Harris is a political newcomer and it isn’t clear how formidable a fundraiser she’ll be. Her fundraising numbers haven’t been disclosed yet.

The best hope for Republicans is for Ms. Harris to flop in the predominately white and more conservative portion of the district in Bay Ridge, as well as struggle with right-leaning Russian-American voters in the Coney Island and Brighton Beach half. Ms. Harris is better known in the Coney Island half, and if demographics are destiny, she’s in trouble: 8 percent of residents 18 and over of the 46th Assembly District are black and 68 percent are white.

Republicans, who haven’t held a Brooklyn Assembly seat since one-term lawmaker Arnaldo Ferraro lost to Democrat Peter Abbate in 1986, are confident they can win. Mr. Ferraro, now 79, even replaced Craig Eaton as chairman of the Brooklyn Republican Party this week.

“First of all, she has been around for many years, she has name recognition, she is well-known,” Mr. Ferraro said of Ms. Regina-Potter, a GOP district leader. “She has had to collect district leader signatures every year and for different ballot lines.”

But some observers wondered if the GOP would have a better chance if they nominated someone else. Ms. Regina-Potter is something of a perennial candidate: she ran against Mr. Abbate for his neighboring Assembly seat in 2008, and lost the Republican primary for the same district in 2010.

After redistricting left her in Mr. Brook-Krasny’s district, she ran for the GOP nomination to challenge him in 2012 and 2014, but lost her party’s primaries both times.

DACC’s involvement may make the difference in the end. While national Democratic campaign committees have struggled, DACC continues to grow the Assembly majority. In 2014, as Republicans added seats in the State Senate, United States Senate and House, DACC, against the odds, added members to their Democratic conference.

Ultimately, a win by either candidate would not tilt the balance of power in Albany. There are currently 102 Assembly Democrats and 42 Republicans.

The last time the Republicans had an Assembly majority, Richard Nixon was resigning from the White House and Back to the Future was still a glimmer in Robert Zemeckis’ eye. 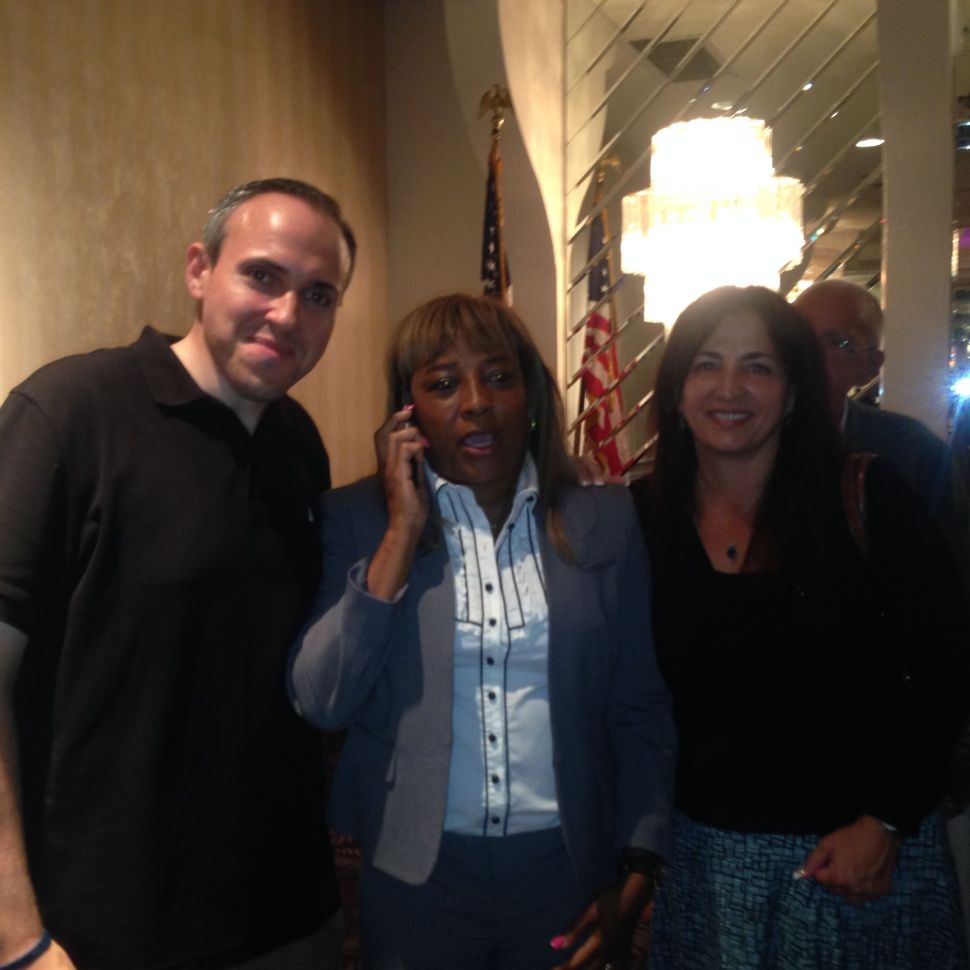