Don’t let the news of artist Greg Capullo’s “little break” from drawing DC’s monthly Batman series fool you — Mr. Capullo and writer Scott Snyder are as close as ever.

Why shouldn’t they be? Since DC relaunched all 52 of its series in 2011, no creative team has enjoyed more longevity — or sold more books — than Capullo and Snyder on their Batman run. They were, and still are in a lot of ways, the seasoned artist in Mr. Capullo joining talents with an up-and-coming writer in Mr. Snyder, a combination that so far has managed to take arguably the most well-known DC title to places it had never been — dark places where shadowy Owl figures pull the strings and the Joker may just be immortal.

I caught up with Mr. Snyder and Mr. Capullo at New York Comic Con to discuss their acclaimed Batman run, and to make sure all was right with the dynamic duo. In person Mr. Capullo, with his handlebar mustache and Batman-esque muscles, shatters just about every preconceived notion you’ve ever had about what a comic book artist looks like. Mr. Snyder, though less brawny, is both thoughtful and perceptive. It isn’t hard to see how the 39-year-old writer deftly handled the introduction of a new villain, a Joker arc, and an origin story, somehow making each seem more refreshing than the last.

And yes, both men are still incredibly passionate about Batman. Both are comfortable residing in Gotham City for the foreseeable future. More than anything, though, it’s clear both men want that Gotham City to be one written by Scott Snyder and drawn by Greg Capullo for as long as possible.

Observer: One of the things I really enjoy about your Batman run is how you focus on how little Bruce Wayne actually knows about Gotham City.

Greg Capullo: It’s funny because Scott and I were just riding around in the city together. We were in Soho, and he goes ‘it’s really crazy, I don’t recognize any of this area except for like, that Starbucks over there.’ He says the rest is all changed. He says to me and my wife, ‘that’s the crazy thing about this city.’ And that’s how he thinks about Batman. Because it is impossible to know this entire city. It’s ever-changing, and destroying and rebuilding itself so fast. It’s a ludicrous notion to think you know it all.

Scott Snyder: He said it better than I could.

Greg Capullo: Well those are your words [laughs].

Why is it important from a character standpoint, that Gotham still be such a mystery to Bruce?

Scott Snyder: I think for me, a lot of our run is about Bruce’s mortality. He’s a character that is constantly at war with his own immortality. To me, that’s deeply interesting. He’s this character that makes himself, through force of will, into this legend, and something that extends beyond his body and extends beyond his own limitations. At the end of the day, what makes him human is what makes him relatable. I like showing how wrong he can be, and how weak he can be. Because ultimately when he gets out from under those failures, he will say ‘I might never know this city, but I’m damn sure gonna’ try and get to know it.’ That’s Batman to me. Batman tells you the odds might be completely unbeatable, what you’re facing might be terrifying and intimidating and impossible to defeat, but that doesn’t mean you’re not going to get up and believe that you can.

Something else you guys do is show Gotham City during the daytime, which is a departure from the typical “always cloudy, always night” Gotham of the past.

Scott Snyder: I think part of it is, one of the wonders of Greg’s art is that he makes everything so real and three dimensional. I remember once I gave him a scene in an elevator shaft. And I really reiterated this, because I knew it was a monster Zero Year issue, my direction was like ‘It is dark. It is so dark you can barely see anything. Like it really should just be black.’ And Greg still drew all the girders and everything, and it was still so beautiful.

Greg Capullo: You can cheat sometimes, you can bury details in shadow, but you really do need to sell it in order for readers to immerse themselves in the environment. Sometimes I have to give them a little more, even if it’s a pain in the ass.

Scott Snyder: Thinking about it, I hadn’t thought about it that way but I do lean towards showing Bruce in the daytime more than I realized. If I had to put my finger on it, again, I love showing how exposed he is. He is both at once mortal, this man out there in full daylight, and yet he’s still larger than life. I think it speaks to that same interest in his mortality, and his vulnerability. He’s not cloaked in shadow a lot. Greg draws him so human, while at the same time, he’s so heroic. It makes him more heroic to be just a man on a motorcycle, still evoking this huge response.

Scott Snyder: I love the colors of our Gotham. One of the things that doesn’t get mentioned enough is the work that [inker Danny Miki] and [colorist FCO Plascencia] do on the book. The colors that FCO uses to make it not only daylight, but hyper-colored, gorgeous, almost surreal daylight. And the inks that Danny uses, the sharpness, it makes it so real. It’s its own beast. I love entering the Gotham these guys make. I know it’s ours as soon as I see the pencils, the inks, the art. I’m like, that’s our Gotham. It’s not the same as the TV show, it’s not the movies, I know it’s ours.

How has your writer-artist relationship changed and evolved since you started on Batman in 2012?

Greg Capullo: I was going to say it’s less adversarial, but there’s still plenty of times I want to choke the guy [laughs]. It started out a little rocky, but that didn’t last long. He leans on me when he needs reassurance on something he’s writing, or something like that. I always call him Brother Scott because we’re really close now, and I’m like his big brother. When I say I want to choke him it’s work related. I tell him all the time, I’m older, I have less patience. You’ll find out, when you get older any kind of bullshit you go ‘Ahh what the hell get out of my way.’ Scott is young and exuberant, so to me he’s like the young puppy with the feet too big for his body.

Scott Snyder: He has been a big brother. He’s been a real mentor. I’ve learned more from Greg about writing well, and writing for an artist, than on anything I’ve ever worked on. We play it down but, I call him for reassurance on the book and on the work side of it, and there’s no one’s opinion that matters more to me than Greg’s. I don’t think about the fans, or the editors. When I send something into Greg, it’s about us. Is this good enough for us? Does this speak to you?

He’s also just been a great friend to me. I’ve been through some periods during the time on the book where I’ve struggled with anxiety and depression, and had trouble really getting back on my feet. And Greg has been a real friend to me in those moments. That stuff goes beyond our partnership on the book. If it came down to being his friend, or working with him on Batman? Honestly, on my kids’ lives, I’d drop working with him tomorrow if I had to choose between being friends or working together. I really feel like like we’ll be friends and partners forever. And if I ever I got so choke-able that I thought it was threatening our friendship, I’d say there’s a million guys who could write amazingly for you out there, and we should take a break.

So is it that much more gratifying when you see something you two created in your run transcend the comics and enter into the larger Batman media? Like, [Gotham creator] Bruno Heller said recently the Court of Owls will show up on Gotham.

Greg Capullo: Well, I’m hoping that we’ll get a lot of money out of that [laughs]. No, it’s very cool and flattering. Obviously, Scott is the architect of that and I put some visuals to it. But it’s equally rewarding for the both of us to see something we collaborated on be brought to another media.

Scott Snyder: Yeah my only stipulation was that we get to be owls all the way in the back, giving thumbs up to the TV camera. 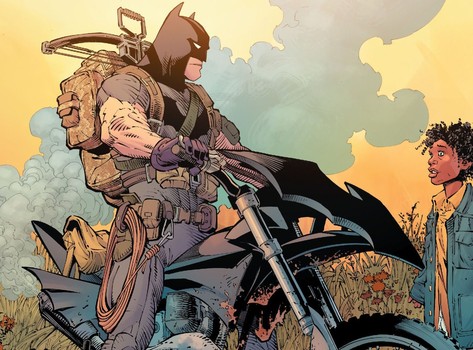