Like most Saturday evenings at Bluestockings, dozens of patrons milled through the store door last week, gathering under the colorful lanterns housed within the mint green walls. Rather than occupying one of the nearby Lower East Side bars, the crowd spent the night sipping dollar coffee and sifting through shelves of books, killing time before one of the many transgender writers whose books are stocked by the shop took to the stage for a reading. Unlike years past, however, the evening’s festivities were dampened by the store’s now unsteady future.

Bluestockings—a collectively owned and volunteer-run radical bookstore and café that has served as an activist center for nearly two decades—is in the midst of a financial threat, due to a 22 percent increase on a newly signed five-year lease. Once hailed as New York’s only feminist bookstore, members have launched a crowdfunding “Indiegogo” campaign in late September, aiming to raise at least $50,000 in order to renovate the outdated store, update equipment and ensure its Allen Street location.

“Being a space that barely breaks even, it’s been over 15 years of getting by by the skin of our teeth,” said Janelle Kilmer, a Bluestockings collective owner. “The plumbing breaks and we end up not being able to fix it. Then the lights go out, and all that stuff builds up over time.”

Moreover, there is no way the store can operate at a lower cost, since both the staff and collective owners are unpaid volunteers and any sales are poured into the location.

‘Being a space that barely breaks even, it’s been over 15 years of getting by by the skin of our teeth,’ said owner Janelle Kilmer.

Since its inception in 1999, Bluestockings has never been updated. It was set to close in 2003 until a new owner took over with a non-hierarchical model of collective members, and the focus shifted from just a feminism to a wide range of social justice issues.

“It’s reminiscent of a salon, that very intellectual, warm space,” Elizabeth Scales, one of 80 volunteers at the store, told the Observer. “A lot of demeanors can be found here and it’s really wonderful and accepting in that way.”

The store currently carries over 6,000 book titles, academic journals and zines that cover topics of feminism, race, gender and political theory, among others. It also enacts a “Safer Space Policy,” daily guidelines for patrons to ensure mutual respect and a non-threatening environment.

“It’s kind of like the evolution of the feminist movement, in a way,” said Ms. Kilmer, “moving away from focusing on just one isolated issue and seeing how other issues are interconnected.”

But it’s been a challenge to operate with broken lights, a hole behind the cashier counter and decade old XP computers that crash. The planned renovation is more for safety reasons than it is for cosmetic appearance—especially since walls have caught on fire from electrical shortages.

A makeover, Ms. Kilmer noted, would benefit more than just the store itself. As a counterculture community center, Bluestockings has built up a history in the Lower East Side and stood the test of the neighborhood’s ongoing gentrification. Remaining in the Allen Street space would not only prevail against the displacing phenomenon, but spare a cheaper neighborhood from the trend of influxing retailers.

‘Coming here is in a sense like coming home,’ said event speaker Tyler Vile, a 22-year-old transwoman and disability activist who was born with cerebral palsy. ‘I know that this is a space that exists ideologically and emotionally to support people like me.’

“We were thinking that if we move to a cheaper neighborhood in Brooklyn, we would be part of the gentrification problem,” said Ms. Kilmer. “We would rather stay here than contribute to somewhere else.”

Almost everyday there are literary events that fit into the store’s social justice mission, including workshops and regular book clubs—such as the popular workshops Feminist Discussion of Masculinity and the Icarus Project Radical Mental Health Series—that extend activism conversations beyond the shelves. Past events have included celebratory names in activism, including two members from Russian feminist punk group Pussy Riot.

One well-received event this month, which packed the store, was Poetry & Digital Writing from the Transgender Vanguard, featuring readings from five transgender digital writers and poets.

“Coming here is in a sense like coming home,” said event speaker Tyler Vile, a 22-year-old transwoman and disability activist who was born with cerebral palsy. “I know that this is a space that exists ideologically and emotionally to support people like me.”

Bluestockings is the last stop on Ms. Vile’s tour for her first full-length book, Never Coming Home. Unlike mainstream bookstores, she says that community spaces like Bluestockings provide a platform and safe space for trans writers.

“Barnes and Noble ain’t gonna book us, why would they?” she said. “Even if they did, I wouldn’t feel the same set of community. I feel held by these audiences found in radical bookshops.”

So far, with less than a month left, Bluestockings has raised 56 percent of its goal, and even if the set amount isn’t reached, the store gets to keep whatever amount is raised. Fortunately, Bluestockings members are optimistic, with a recent increase in sales. Indiegogo donors also receive various perks, depending on the amount of donation, that range from pins and tote bags to personally curated books and a dinner with leading feminist authors.

“I sincerely hope that Bluestockings can keep the space because I think it’s a critical location,” said Ms. Scales, as she prepared to take on her afternoon shift working in the café area. “It’s versatile, open and safe. That’s what makes it so inherently valuable.” 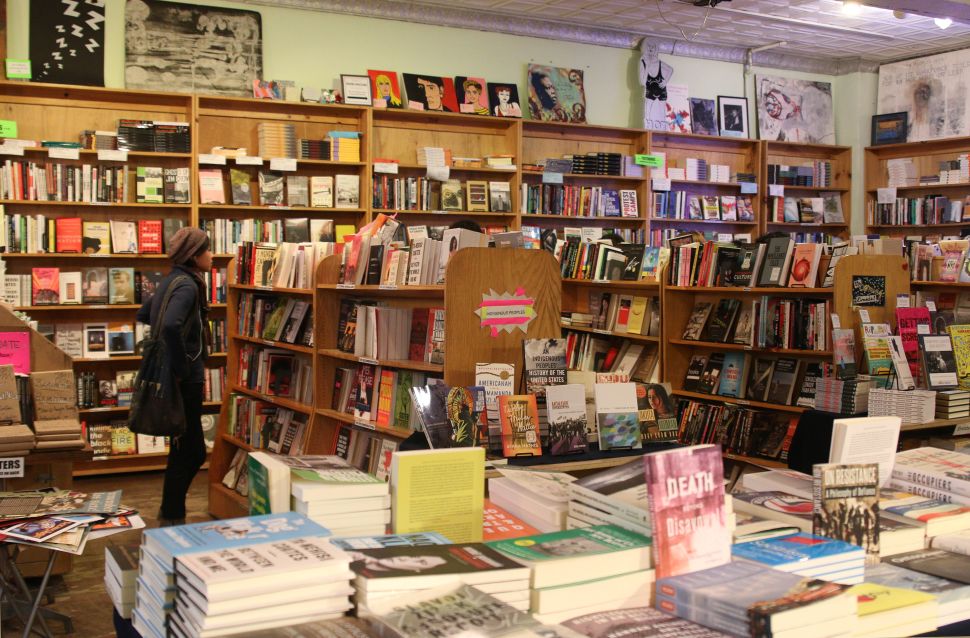