To celebrate this weekend’s premiere of the blood-splattered, chainsaw-wielding and downright groovy Ash vs. Evil Dead, we’ll be rolling out a new interview every day this week with the cast and creators. Yesterday was Dana DeLorenzo. Today: Jill Marie Jones.

Lucy Lawless might have the most mysterious character, Ray Santiago might play a sissy, and Dana DeLorenzo may just have to trade one-liners with Bruce Campbell, but it’s Jill Marie Jones that has the hardest job on Ash vs. Evil Dead — amid the blood, guts and insanity, Ms. Jones portrays detective Amanda Fisher, the series’ resident straight man.

Which isn’t exactly a job she hasn’t pulled off before. Ms. Jones’ last TV appearance was on FOX’s Sleepy Hollow, another series that basks in all things horrifying and strange. But if basic-cable Sleepy Hollow is high school, Starz’s Ash vs. Evil Dead is a master’s degree. As she herself put it when we met up at the New York EDITION hotel: “I feel like I have a diploma in blood now.”

What other benefits come with that honor? The chance to pick the beautifully twisted mind of creator Sam Raimi, the world’s most physical audition process, and an opportunity to kick Bruce Campbell’s ass.

“I called it the ‘Evil Dead’ haircut. The blood would stick to your head so much, you’d have to cut off some hair.”

Observer: Can you tell me about the casting process? I know with franchise projects like Ash vs Evil Dead the network keeps even the actors in the dark.

Jill Marie Jones: It’s actually a funny story. The script was really being protected, so I only had Amanda Fisher’s sides when I went into read. On my appointment sheet when it said “comedy” I thought it was a typo, because there was nothing funny in what Amanda was doing. At first it was weird, but it ended up being my best auditioning process ever. They wanted me to do all the action, and that might sound to somebody that’s not an actor like, ‘Well yeah, that’s what you do.’ But you never really shoot at things that aren’t there, or walk around corners that aren’t there, or fall to the ground and get back up and punch people that aren’t there during an audition. It was so weird! I remember asking my representatives, ‘What exactly did they tell you this was?’ It ended up being the coolest thing ever. I felt like such a rock star doing it.

And once you found out what it was, was it like ‘Well, shit. Even more pressure?’

It is a bit scary to walk into something as iconic as this. These amazing fans have been waiting for so long, waiting for a film and now a show. I was really happy, honestly, that I wasn’t reprising a role, so I didn’t have a lot of creative limitations. I got to really find her, and create, and explore. The shoes I’m wearing have never been worn by anyone else. They gave me the freedom to do that. And Sam Raimi is such a genius, and so collaborative, and really makes you feel like part of the process. It eased a bit of that nervousness.

I was impressed, at least in the first two episodes, how Sam and everyone managed to toe that line between horror and comedy. But how do you navigate that as an actor?

I think it comes naturally. I’m definitely a straight character on the show. But when I’m around, say, goofiness? It’s just like an orchestra. What instrument am I playing in this scene? And you need to figure out where you fit. You’re not going to be the loud rock band drums in a symphony.

How much of the special effects would you say are practical?

Well, you can talk to other people and they might say something else but I feel like I have a diploma in blood now. Those machines, those blood machines, they were full on. Of course, occasionally if you’re dealing with a demon or something you might be acting to an X. But for my character at least, it was really full on. I called it the Evil Dead haircut. The blood would stick to your head so much, you’d have to cut off some hair.

There are scenes in the pilot especially where they put you through the ringer, and it’s not CGI.

Anytime an actor can have another actor opposite them, it really does raise the scene up. I can’t even imagine doing, say, something like Avatar where so much of it is green screen. But I’m also still learning. I was like a student. It was incredible to be able to learn from Sam, because he’s the master.

There was a funny thing I asked him once. I said ‘Sam, I just want to live for like 45 minutes inside your brain.’ Becauase I don’t think I could handle an hour, but just 45 minutes. And he said, ‘You don’t want to go in there.’ But he has such a gentle touch when he’s directing. He has so much respect for not just the actors, but the crew. He gets his shots, he gets what he wants, but he does it with so much respect and compassion.

It’s so fun, because Ash is a thorn in my side. Those little cute jokes don’t work on Amanda. She just thinks it’s a bunch of malarkey. I think I’m allowed to say this now, I kick Ash’s ass like twice before the season is over. 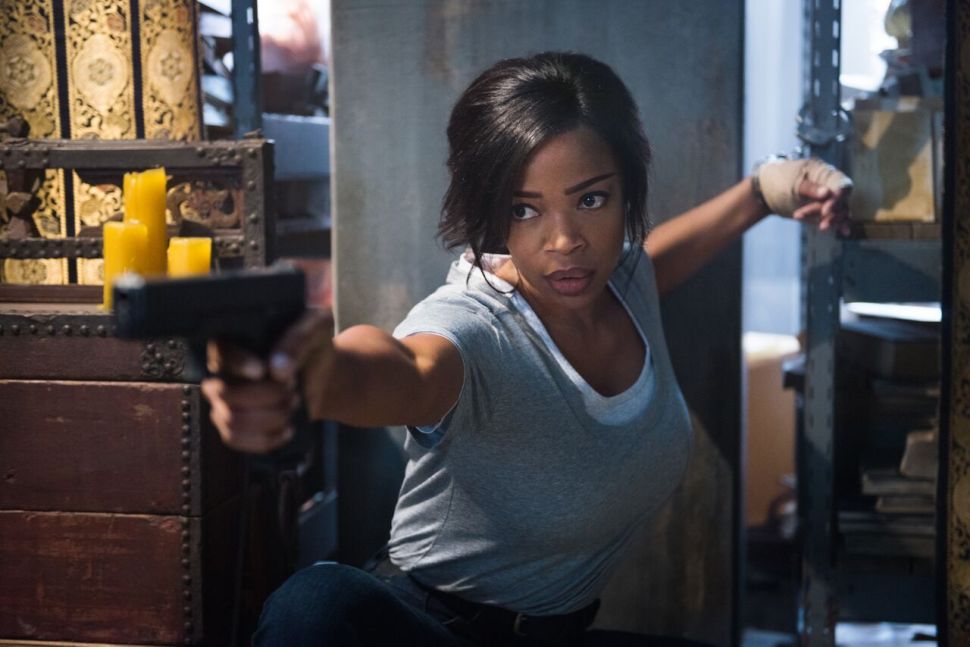