Jim Webb, the former Virginia senator who dropped out of the presidential race this week, reaffirmed in a radio interview today that he was “seriously” considering a long-shot third party bid.

Mr. Webb, a Democrat, struggled to gain traction in the polls against Hillary Clinton and Sen. Bernie Sanders of Vermont and political observers broadly rated his performance as lackluster in the first televised debate of the Democratic primary.

“We are looking at it seriously. We’ve been talking to an number of people, some of them people who have been involved in third party efforts before,” Mr. Webb told Joe Piscopo on AM 970 The Answer. “Some of them [are] people who had already come to me earlier in the year and indicated that this would be a really different year, historically, if an independent run were attempted.”

Putting no immediate timetable on his decision, he added that “the political landscape is so chaotic right now that if there were, if it looked like this could be done and if we could get the right financial support … I think we’ll take a shot.”

Mr. Webb, a Vietnam War veteran, novelist, and former Republican, never fit easily into Democratic politics. While he opposed the Iraq War and spoke often of the need to help the working class, he tacked right on several cultural issues. Lamenting to Mr. Piscopo that Democrats just play “interest group politics,” he often drew fire from liberals for his criticisms of affirmative action, his defense of the Confederate battle flag and one-time opposition to immigration reform.

Mr. Webb was convinced that the Democratic Party had given up on the white, low-income voters, particularly in the South, who made up a traditional part of their base.

“I think the Democratic Party historically has been the party that takes care of the issues affecting people in this country who normally don’t have a voice in the corridors of power,” he said. “I’ve been concerned for several years that leadership at the top has been moving away from those people and into just interest group politics … I think a lot of really hard-working people in this country who carry the daily load have been lost in his formula.”

Independent candidates have never won the White House and Mr. Webb, who is not independently wealthy, would struggle to raise money to take on the Republican and Democratic nominees. His shoestring campaign failed to make any impression in the Democratic primary and his path to the presidency would only become more daunting if he ran on a third party line.

But Mr. Webb said he would count on the dissatisfaction voters feel with both parties to make his case.

“If you look at the polls, the great percentage of people in this country right now are discouraged by where both parties have gone,” he said. 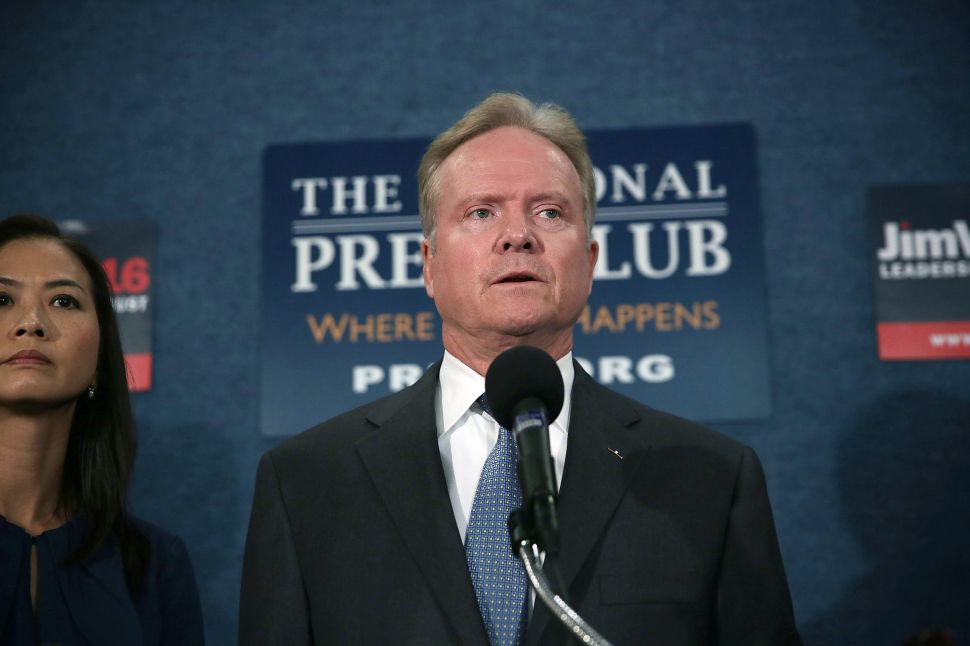