The latest development in the saga of whether Vice President Joe Biden will run for president came early Friday morning with word that “friends of Biden” were whispering to friends in the media: a final decision will be announced within three days.

As a columnist for one respected publication in Washington and another respected publication in New York, readers can assume I am regularly in touch with high level media insiders deeply involved in the presidential campaign. With this in mind, let me first offer my opinion and then my reasons, though I have no “inside information” about Mr. Biden’s private thinking (nor do most of those quoted in the media).

Is he immobilized by indecision, like Hamlet, or operating with cold calculation, like the protagonist in Macbeth?

First, my bet is the probability that Mr. Biden announces he is running is 10 percent, and the odds he drops out are 90 percent. Second, if he does run, I believe it will soon become apparent that his candidacy was a huge mistake and he will ultimately come in third behind Hillary Clinton and Bernie Sanders, while his candidacy will give some lift to Mr. Sanders, because most of his limited support comes from those who now support Ms. Clinton.

When I use the Shakespearean analogy to ask whether Vice President Biden is Hamlet or Macbeth, I am posing the question of whether he is immobilized by indecision, like Hamlet, or operating with cold calculation, like the protagonist in Macbeth. Mr. Biden is looking like both Hamlet and Macbeth, which is no path to the presidency for any man or woman.

If Vice President Biden had a powerful and compelling reason to run for president, or a presidential-calibre vision of where he would lead America, he would have announced his candidacy six months ago, or at least spent the last two months giving important speeches addressing the major issues of the nation in substance.

He has done neither.

From the early days in August when Mr. Biden began to make his campaign moves, his putative campaign has offered nothing more than a vulture candidacy whose only apparent purpose was the cold calculation that Ms. Clinton’s campaign could collapse, so he could move into the breach.

The problems engulfing the Clinton campaign were very serious in August, but since then she has rebounded and gained strength. The other major Democratic protagonist in the 2016 campaign, Mr. Sanders, has similarly performed brilliantly and gained strength.

Had Mr. Biden possessed and proposed a profound vision for the future of America, the ups and downs of Ms. Clinton and Mr. Sanders should not have mattered. The vice president could have spent August, September and October publicly offering and politically testing his own unique vision for the presidency and the nation.

Mr. Biden spent the last three months doing calculations and recalculations of his vulture scenario. Because he demonstrated no true reason to run, as the fates of Ms. Clinton and Mr. Sanders improved, Mr. Biden continued pondering his moves–he was reduced to almost weekly rumors of repeated hints that he would soon announce his candidacy, with no decision ever being made.

In this sense Mr. Biden looked like Macbeth, coldly calculating that his opponents might fall. When that didn’t happen, he looked like Hamlet, unable to make a move.

Ms. Clinton is riding a mini-surge after the public discrediting of Congressional Republican efforts to attack her, when even the Republican House Majority Leader’s suggestion that the House Benghazi committee is politically motivated helped advance the Clinton cause. Her stellar performance in the first Democratic debate further fueled her campaign revival and reinforced the confidence of Democratic power players and donors, which drove a dagger into the heart of any Biden vulture candidacy.

Meanwhile, Mr. Sanders continues his powerful grassroots surge and unprecedented success in raising money from small donors. His populist message of social justice and economic equality was furthered empowered by his compelling performance in the recent debate.

While Hillary began acting like the second Clinton to be called a comeback kid, and Bernie Sanders continued acting like the progressive conscience of the Democratic Party, Joe Biden acted like a man without a reason to exist.

Compared to the Clinton comeback and the Sanders surge, Mr. Biden looks like a marginal player on the sidelines with nothing of importance to say and no base of support to call upon for the nomination.

It is true that while Mr. Biden lags in polling for the nomination, he does well in polling for the general election against Republicans. The disparity is based almost exclusively on public sympathy for the family tragedies he has sadly but gracefully endured. This “free ride” from the press would end as soon as he announces his candidacy. His primary polling numbers would fall even further and his general election numbers would fall markedly.

Once presidential candidate scrutiny begins, the media will look at his decades of service in the Senate representing Delaware, and will report that–like all Senators from banker-friendly Delaware–Mr. Biden spent decades carrying a lot of legislative for Wall Street firms. And, soliciting a ton of campaign money from them.

Similarly, Mr. Biden will have to defend some major positions most voters do not know about, such as advising President Obama to not undertake the mission that killed Osama bin Laden. It would not be unfair for opponents and some in the media to charge that if Biden were commander in chief when that decision was made, bin Laden might still be alive today and planning more attacks against America.

With Ms. Clinton’s resurgence there is little demand from Democratic insiders or major Democratic donors for the vice president to “save the party.” Most Democrats do not now believe it saving from him or anyone else. If Mr. Biden does run there will be widespread bitterness from many women who support Ms. Clinton–they do not want to give up the notion of America electing a female president who is highly qualified and has recently achieved a new burst of momentum.

With the Mr. Sanders’ surge continuing, there will be disdain from his devoted followers who will not take kindly to his progressive populism being challenged by a vice president who spent years carrying for big banks in the Senate.

Whatever his virtues, the indecision and calculations of Mr. Biden have made him appear like the movie producer in The Godfather who, shortly before receiving the horse’s head, told Don Corleone’s consiglieri that a man his position cannot afford to look ridiculous.

The Biden soap opera of recent months have made the vice president look ridiculous–without any coherent or appealing rationale for his candidacy, he should not run and would not win. 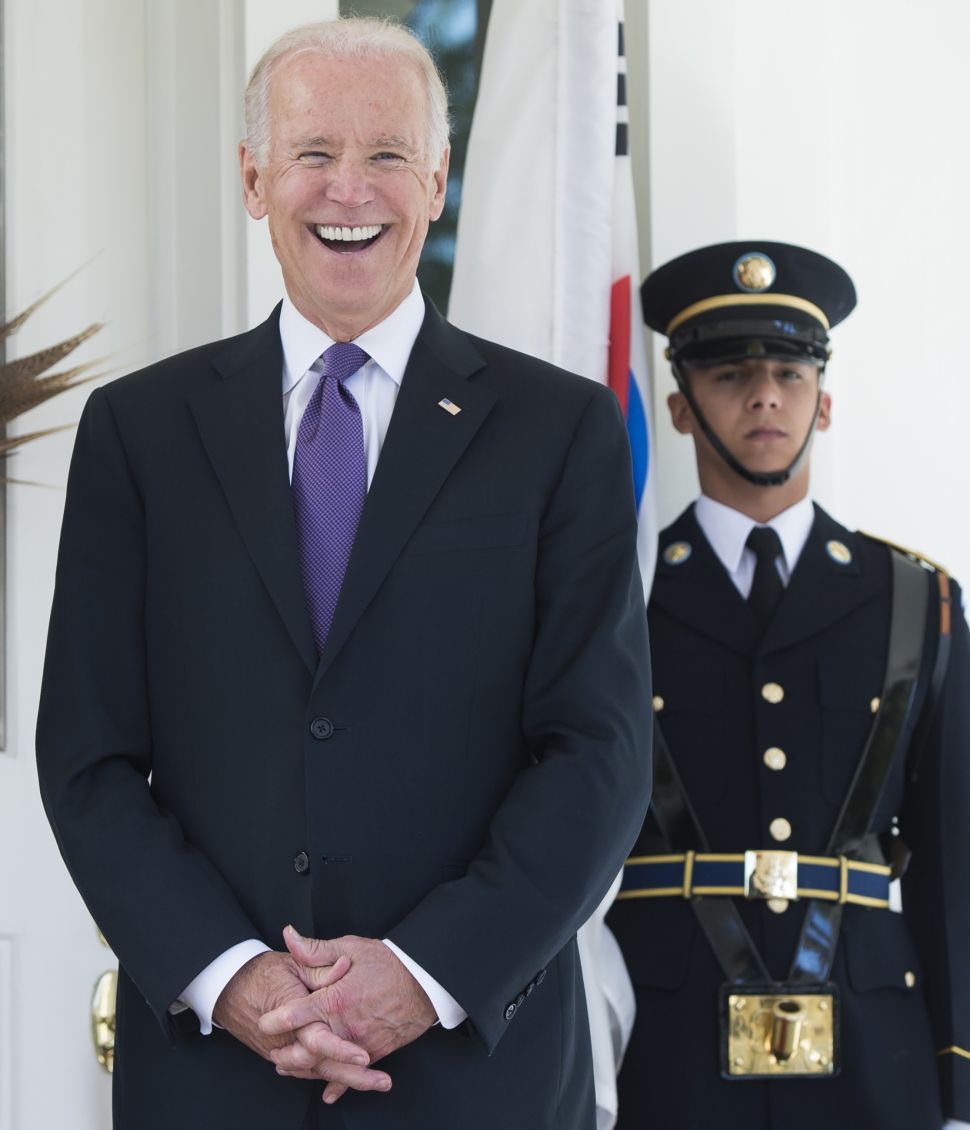