With the first Democratic presidential caucuses and primaries only four months off, speculation abounds as to the intentions of Vice President Joe Biden. Will he or won’t he?

While nobody aside from Mr. Biden himself can answer that question conclusively, the best answer—albeit an unsatisfactory one—is probably “it depends.” And mostly, it probably depends on Hillary Clinton.

As things sit right now, the answer, realistically speaking, is probably closer to no. While we await the formal release of Federal Election Commission filings of fundraising totals and cash on hand for the third quarter of 2015, the leading Democratic contenders have already let us know where they stand on the cash front. According to the Washington Post, the former Secretary of State, Senator and First Lady’s campaign reports having raised $28 million during the quarter, which would bring her to more than $75 million raised all told, with $32 million on hand. Those totals do not include “outside money,” that is to say the more than $17 million raised by SuperPACs and independent groups supporting Ms. Clinton. Meanwhile, the campaign of Sen. Bernie Sanders reports raising $26 million during the third quarter and $41 million total, with no outside money, and $25 million on hand.

While there is little doubt that the vice president can certainly raise money if he decides to go, he would start out considerably behind, with little time to catch up to either of the two main Democratic contenders before the first votes are cast in February. The logistics of getting a campaign up and running in four months would also be daunting, especially when Ms. Clinton and Mr. Sanders are already going full steam ahead.

Why would individuals supporting the insurgent candidate switch gears and throw their support to an insider like Mr. Biden?

Then there is also the question of what Mr. Biden would hope to accomplish by running and what impact it would have. Oddly, the majority of polls taken in recent weeks include Mr. Biden, despite the fact that he is not currently running and the fact that nobody—perhaps not even Mr. Biden—knows whether he will enter the race at all. But a quick comparison of the polls that do include him, and the ones that don’t, make one thing crystal clear: the lion’s share of Mr. Biden’s support comes at the expense of Ms. Clinton and makes almost no impact on Mr. Sanders’s standing. This makes sense: Why would individuals supporting the insurgent candidate switch gears and throw their support to an insider like Mr. Biden?

That brings us to another key point. For all his talk of his humble upbringing in Scranton, Pa., and his celebrated common-man persona, the vice president is an establishment Democrat all the way to his core. A six-term U.S. senator prior to becoming vice president in 2009, Mr. Biden is the consummate Washington insider. There is no doubt that a savvy establishment politician like Mr. Biden can read the polls as well as anyone else and probably better than most. Would he really enter the race knowing full well that he may fracture the party’s mainstream vote and possibly help propel Sen. Sanders to the nomination? Again, only Mr. Biden can say for sure, but it does seem a bit unlikely that he would risk such a result—especially considering the June Gallup Poll indicating that a self-professed socialist (like Mr. Sanders) could count on the general election support of less than 60 percent of self-identified Democrats.

And yet, there continues to be a swirl of concern about whether Ms. Clinton’s e-mail woes will continue to weigh down her campaign. A Suffolk University/USA Today poll taken Sept. 24-28 found Ms. Clinton facing daunting favorable/unfavorable numbers—39 percent to 51 percent. Asked to describe Ms. Clinton in one word, the leading terms cited by respondents were “liar,” “dishonest,” “untrustworthy” and “fake.” Though she continues to maintain a sizable lead—Suffolk/USA Today put her at 41 percent, compared to 23 percent for Mr. Sanders and 20 percent for Mr. Biden—those pejorative sentiments toward Ms. Clinton cannot be any more comforting to establishment Democrats than the notion of a Sanders nomination would be. Certainly all political leaders have their detractors, and it remains to be seen whether these feelings about Ms. Clinton will significantly hinder her chances to win the presidency.

Given the short amount of time Mr. Biden would have to get a campaign up and running and to catch up on the fundraising front, and also given the clear likelihood that a run would boost Mr. Sanders’s chances for the nomination, it does seem unlikely that Mr. Biden would pull the trigger on a run—unless Ms. Clinton suffers a massive erosion of her position that would constitute an existential crisis for her campaign. In that case, Mr. Biden might have to step in to prevent a Sanders nomination—a scenario that could amount to political suicide for the party in the 2016 elections.

In short, the likeliest scenario at this point is that the vice president will continue to play the role in the 2016 campaign that he has played for the last six years: an insurance policy. 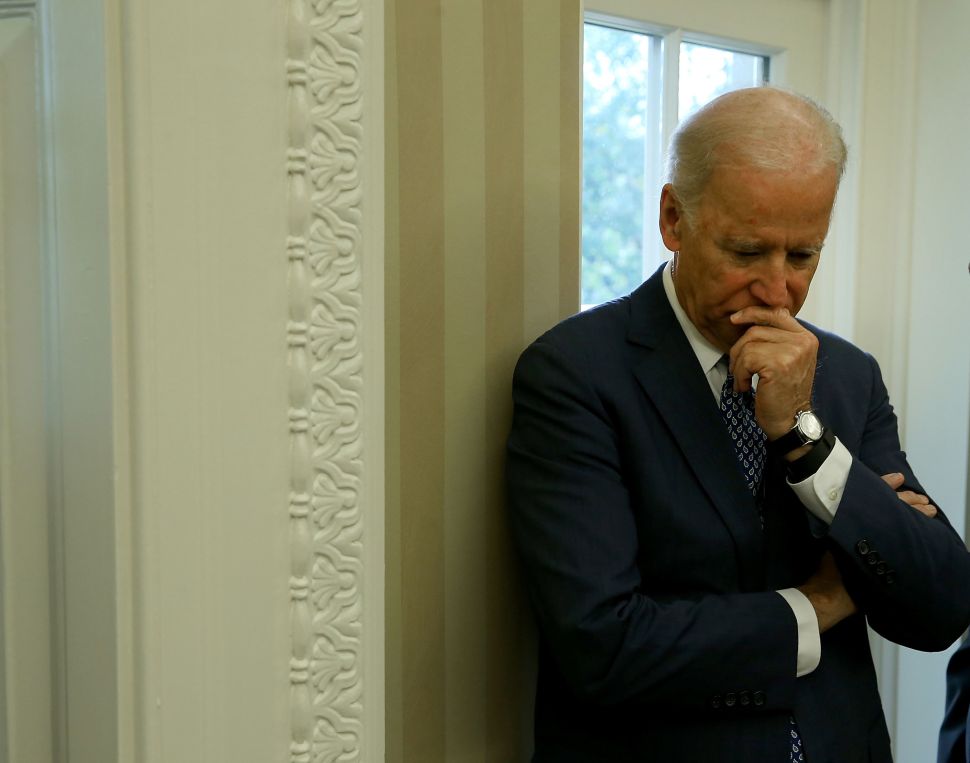