Punching back at a series of newspaper ads from the transit workers’ union blasting Mayor Bill de Blasio, liberal allies of the mayor accused the union of doing Gov. Andrew Cuomo’s dirty work in his ongoing feud with City Hall.

One top labor official said John Samuelsen, the president of Transport Workers Union Local 100, was beefing with Mr. de Blasio simply because the mayor’s Vision Zero initiative initially forced bus drivers to automatically face misdemeanor charges if they injured or killed pedestrians crossing with the light in their favor.

“I think John is personalizing this issue,” the labor official, who spoke with the Observer at City Hall’s behest, told the Observer. “He’s politicized an issue that should be a concern to all of us. There are so many places where Albany is already taking so much money from this city, including transit, and to add in a campaign attacking mayor on this issue because of a personal beef–it’s irresponsible.”

The TWU ads, one of which ran in the Daily News today, echo attack lines from Thomas Prendergast, the chairman of the Metropolitan Transportation Authority, who has criticized City Hall for not contributing the $3.2 billion the MTA says is required to fully fund their $30 billion capital plan. The latest ad depicts a cartoon of the mayor hopping a subway turnstile and a previous ad said Mr. de Blasio’s failure to adequately fund the MTA would lead to a return of the graffiti-smeared subway cars and chaos of the 1970s and 80s.

Mr. de Blasio said today the ads are “inaccurate” and hinted this could be another proxy skirmish with Mr. Cuomo. “The TWU is obviously just posturing at this point,” he said.

City Hall has offered to kick in $657 million over five years, a major increase over the $100 million the city historically contributed to the MTA. Mr. Prendergast, a Cuomo appointee, insists more must be done, even as allies of the mayor argue the city already pays its fair share to the MTA through tolls and taxes. Mr. de Blasio wants Mr. Cuomo and the MTA to promise that additional city dollars won’t be used for projects that have nothing to do with transit.

A veteran labor operative following transportation issues argued that Mr. Samuelsen is just angling for a better contract for his workers, who negotiate with the state and not the city. The TWU contract expires in January 2017, which means the union will be spending much of next year bargaining with the governor.

“Everybody knows TWU has a contract coming up with the governor,” the operative said. “No one takes the substance of these accusations seriously who knows anything about how MTA budgets are done.”

“This is about John’s need for a contract,” the operative added.

Jonathan Westin, the director of New York Communities for Change, a liberal group, said the latest spat between the MTA and Mr. de Blasio, as well as the TWU, was a fight “manufactured” by Mr. Cuomo. The relationship between Mr. de Blasio and Mr. Cuomo, fellow Democrats, grew especially testy this summer over a variety issues related to the state legislative session.

“The transit union has bought into this false narrative that the governor is perpetuating in his fight with the mayor,” Mr. Westin said. “It’s a bad attempt at doing a campaign that is putting subway riders at risk and every day straphangers while governor laughs all the way to the bank for his billionaire donors.”

Mr. Samuelsen himself rejected all of these criticisms, and lashed out at those who tweaked him anonymously in this story.

“If you don’t have the balls to put your name to a quote, I’m not going to respond to it,” he said. “Whoever made this quote has their own contract to deal with and is trying to flip the same theme onto me.”

Adding that he was “tired” of people “without balls,” Mr. Samuelsen said his critics don’t know a “damn thing about the MTA” and probably don’t use the subway. “We have bought into a narrative. The narrative is working families who use the subway system are getting screwed. New York City is not doing its fair share.”

“That is nobody else’s narrative but the TWU’s narrative,” he continued. “I am not giving you anonymous quotes. There’s nothing anonymous coming out of this mouth.” 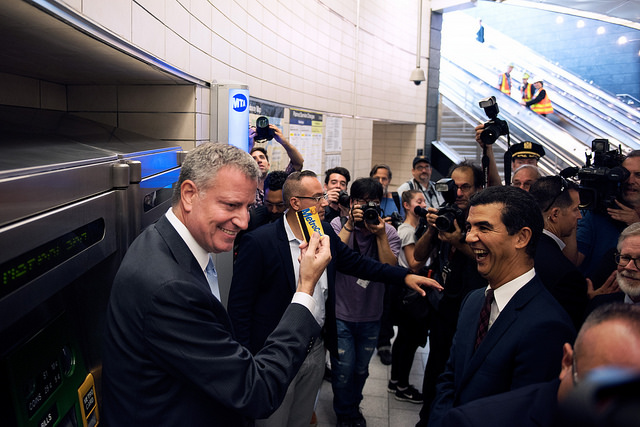