I’m just going to say it – sometimes I really envy those folks who get to get to write about shows that don’t have politically charged, ripped from the headlines storylines. Simply summing up who’s sleeping with who or who’s cheating on who and the shock value of these actions seems a heck of a lot easier than trying, and I strongly emphasize trying, to analyze an episode that focuses on a subject matter that continues to spur copious amounts of debate.

I’m just one person, whereas this show employs a staff of writers who carefully contemplate how they’re going to convey the story that they feel needs telling, the manner in which they’re going to tell it and how it will conclude. They no doubt deliberate, debate, confer and converse about every plot point and every line of dialogue contained within the narrative, all in an effort to create a compelling piece of television and in this case, a bit of a controversial one.

Who am I to offer any kind of evaluation of this? Especially in this case, where I am neither a police officer nor a black man – the two opposing factions of the population featured in this storyline.

Given this, my hope is that what I will be able to do is offer some slight insight into the storytelling process and possibly offer an angle that maybe just makes you think about the subject matter as a whole, if nothing else.

First things first; a summary of the episode.

After an attack by a suspect that the police have dubbed ‘the push-in rapist,’ the SVU team, along with officers from another precinct, are anxious to catch the guy. A general description of a black man wearing a sports jersey leads the detectives to a bodega where a credit card stolen during the latest attack was used. The cashier swears he saw the suspect and that the guy had something in his waistband, possibly a gun. Cut to a uniformed officer chasing a suspect in an identical jersey. Two additional officers join in the pursuit. As the SVU team is arriving on the scene, but before they’ve joined the other officers, multiple shots ring out, 35 to be exact.

As the suspect lies on the ground, bleeding and cuffed, Lieutenant Benson tells Detective Carisi to confiscate the suspect’s weapon. Thoroughly searching the suspect, Carisi cannot locate a gun.As internal affairs questions the officers involved in the shooting, DNA tests prove that the young man was not the rapist the team was looking for. And, a video of the incident surfaces that shows the suspect was just reaching for his keys and had his hands up when he turned toward the officers.

Under pressure from the DA’s office, ADA Barba convenes a Grand Jury in an attempt to bring charges against the officers. After some contentious testimony, the jurors hand down indictments for all three officers.

As several officers are discussing this outcome at a bar, a call comes in that leads them back to the hospital where they learn that a young fellow officer was shot and killed during a routine traffic stop.

While Ferguson is name dropped during this episode, much of this installment seemed more reminiscent of an incident that occurred in 1999, ironically the year SVU hit the air.

In that case, Amadou Diallo, a 22-year-old immigrant from Guinea, was shot 41 times in the doorway of his apartment building. Diallo matched the description of a rapist and when police approached him and ordered him to show his hands, he reached into his jacket for his wallet. In poor lighting, the officers thought Diallo had a gun and he sustained 19 bullet wounds. The four officers were indicted on charges of second-degree murder and reckless endangerment, but were acquitted of all charges.

I bring this up to show that this happened 17 years ago – and it’s still happening.

In 2015 alone, of the 74 unarmed people who have been shot and killed by police (that stat is shocking in and off itself!), 28 of them have been black men.

As I said, I just don’t know exactly how to react to this – to any of it, not just this episode of SVU.

I know that I feel both outraged and confused at the same time. I want police officers to do their job, but the definition of that job seems extremely muddied lately, and I think is what was at the heart of the story that SVU was trying to tell.

It seems that every day more comes to light about the thread of distrust that runs between police and the black population, and much of the general population really, and that, sadly, this is where police procedure and split-second decisions often collide in a manner that has a horrible outcome. Then in the aftermath of such an incident, there’s no way to undo what’s been done.

The only thing you can do is ask yourself what you would have done in such a situation and if the parties involved acted in a reasonable manner in said situation. I think there were several story points that  displayed this sentiment – the officer who only shot three times as opposed to his fellow officers who unloaded on the suspect, Barba implying that the officers should have waited a few seconds before opening fire and Benson, while not saying it, contemplating what she would have done if she had reached the suspect at the same time as the other officers – all of these things not only represented the gray area of this storyline, but also fed into the central conceit – what is appropriate action when faced with what is perceived as a dangerous situation, and what factors into that decision-making process?

The officers kept saying that the young man fit the description of the suspect and that he ran. That and the fact that he ran to a housing project surely factored into the officers thought process. One can’t help but wonder if this had been a white male who had run to the front door of a brownstone if there would have been a different outcome.

It was also quite interesting in the Grand Jury scenes to see the jurors questioning Barba about the level of charges brought against the officers. This scene could have been written very differently. I believe that someone mentioned during the episode that Barba would ‘lead’ the jury to an indictment, but while he pressed the officers during their testimony, he didn’t seem to over do it. The fact that the jurors asked questions, taking their role in this so seriously, shows that the public is learning, maybe reluctantly so, but none-the-less learning, heaps about legal procedure in cases such as these. In the past, Grand Jury proceedings have seemed quite mysterious. Now reports and documents make them accessible to all interested parties.  (Btw, if you’re one of those interested parties, you can actually read the Grand Jury testimony in the Michael Brown case here.)

Another aspect of this episode that was so interesting is that we were privy to various law enforcement entities discussing how each of them felt about this. We’ve seen protestors and (heart-wrenchingly) parents talk to the media, but we really haven’t seen the innerworkings of the police grappling with something like this before. No, this wasn’t reality, it was a scripted drama, but that doesn’t make it any less noteworthy.

That inside look was uncomfortable for many viewers as some thought that it was out of character for Benson to side with the police instead of the victim. That conflict, and the discussion surrounding it, is one of the things that made this episode such a worthwhile endeavor.

Looking at all of these elements, one could say that the theme of this episode might just be conflict; the ever escalating conflict between black America and the police, the conflicting feelings among law enforcement officers about incidents like this, and the conflicted outlook for the future in this area.

As this episode drew to a close, unlike most episodes of SVU, there was very little, if any, closure – there were indictments but no convictions, a rapist is still at large, and a police officer was gunned down performing what’s largely considered a routine part of the job with no suspect in custody.

Sadly, this parallels what’s really happening in society in that there is very little hint of progress in an area that has angered many, for a plethora of different reasons. At the very least, there is discussion and that can lead to action. For all for our sake, let’s hope that it does.

As I said, I can really only offer some thoughts on the storytelling here and a few sparse observations about the issue itself, but I will say this, this was a difficult story to tell. No matter how the narrative was crafted there was sure to be viewers commenting from every angle, some intrigued by this and some angered by it. The powers that be at SVU could have not told this story; they could have just not done anything on the topic at all. The fact that they did, whether you agree with how they did it or not, is a credit to them.

Just like any TV show, SVU never pretends that it can fully solve a problem, but it’s pretty universally understood that the series does explore difficult topics and offer a way into discussions about those issues, many of which are the most pressing of our time. This is clearly one of those instances.

After all of that, it’s a bit of a relief to me that I can finish this piece by saying, “Murphy is Rollins’ baby daddy?!?” 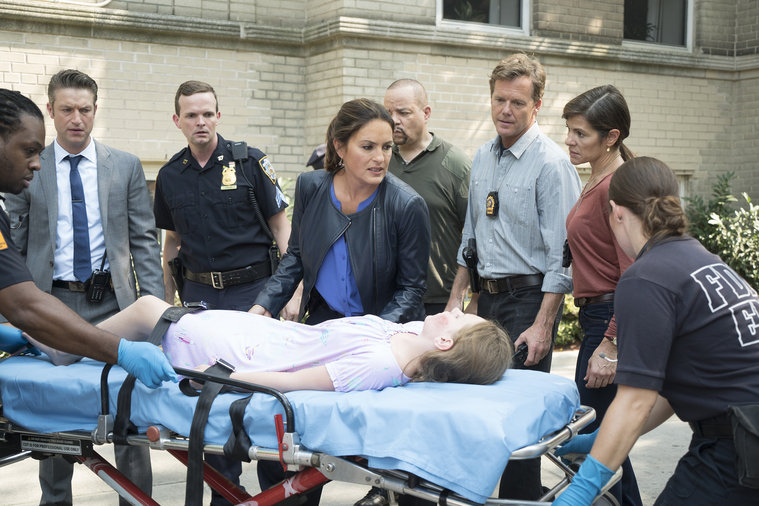