I think we can all agree that there are few things harder in life than starting a new job…..except maybe dealing with your family.

Oh, and maybe having a baby – on your own.

In this episode of SVU we got to see a lot of different people struggle to handle all of these things.

It’s often said, at least I’ve heard it a million times in my life, that you get to pick your friends, but you don’t get to pick your family. You’re born into this group of people that you may or may not care for but that you’re stuck, with in some manner, for the entirety of your days.

Fans of SVU know that if anyone feels stuck with a crazy family, it’s Amanda Rollins. We’re well acquainted with Amanda’s sister Kim, whom, when we last saw her, almost cost Amanda her job courtesy of an ill-planned murder/get-rich-quick scheme, then she jumped bail and cleaned out Amanda’s apartment on her way out of town.

Now she’s back and once again stirring up trouble. But let’s roll back a moment here –

This episode opens with some inter-cutting between a baby shower and a hip classical concert with beautiful women rocking out as they play violins along side a long-haired flautist. (You know, we really haven’t had a lot of rock flute playing lately, so…let’s give a shout out here to Jethro Tull who really pioneered the genre!)

Present at the baby shower is Amanda Rollins mom, Beth Anne, visiting from down South. Beth Anne seems like she’s going to be helping single mom Amanda when the baby comes, but it’s sort of clear from the get-go that Beth Anne isn’t your typical nurturing maternal type as she swigs a bit too much champagne during the celebration.

As that party goes on, cut to Kim, in a dark wig, coaxing the flautist from a bar back to his hotel room where she promptly steals some cash and his $50,000 flute as he lays passed out.

The next day, one of the violinists accuses the flautist of rape (now there’s a sentence I never thought I’d write) and the SVU team is brought in to investigate. Amanda immediately recognizes Kim on surveillance tape from a pawn shop with the stolen flute. She keeps the information to herself as she tries to get Kim to surrender to the police, but of course, Kim just laughs at Amanda’s suggestion and saunters away.

Meanwhile, new Sergeant Mike Dodds, on his first day as a member of the SVU squad, takes it upon himself to really pursue the thief who relieved the flautist of his instrument (in more ways than one, if you know what I mean) not aware that the perp he’s after is Rollins’ sister.

Eventually, Amanda tells Fin what’s going on with her sister with the two of them (unwisely) keeping information from Lieutenant Benson. When Benson does find out, she’s none too pleased with either of her subordinates and forcefully lets them know this.

Working her mother, who clearly favors her on-the-run daughter, Amanda finally gets Beth Anne to lead the team to Kim. Once in custody, Kim uses her beguiling ways to manipulate her attorney and, with a smile on her face, tells Amanda that if given the opportunity she’ll publicly air all Amanda’s past issues – gambling, being raped on the job – and use them to her advantage any way she can.

That Kim, she’s a real charmer, isn’t she?

After she reprimands Amanda for being insensitive to Kim’s needs (really?!?), Beth Anne storms off, leaving Amanda to realize, just as she’s about to give birth, that she’s truly all alone.

“This is the most messed up family drama we’ve done in a long time,” EP Warren Leight told me. “You have the successful detective daughter and the daughter who has warrants out for her arrest and is a suspect in yet another crime and who do you think Beth Ann values more? We built this very twisted little love triangle within this family and it’s heartbreaking to watch but this is what really happens in some families.”

In addition to all of that Rollins’ family drama, new SVU team member Dodds isn’t exactly going to be welcomed with open arms. Leight explained, saying, “Mike Dodds is the Deputy Chief’s son and nobody wants the boss’ son in the squad, and in addition to that, no one wants someone coming in who doesn’t know anything about the work that the SVU team does. It’s pretty clear right away that Rollins doesn’t need the hassles this guy brings and while Carisi tries his best to work with the guy, it’s obvious that Fin can’t stand him.”

Dodds arrival clearly has already driven a wedge between the usual rock solid duo of Benson and Fin, as Benson pointedly said to Fin, “I offered you the chance to be my number two and this guy wouldn’t be here if you had stepped up.”

This kind of stress on Benson is a theme that will be carried throughout the season, revealed Leight. “There’s just too much on her shoulders. She’s down a detective since Amaro left and now she has another detective who’s about to take maternity leave so the team is really sort of falling apart and someone has to come in to help. But, because of what happened with child services [in the Institutional Fail episode] she didn’t get to choose who to work with. So, Benson’s getting pushed around from above and she has no support from below and you can see that stress on her.”

Up until this episode, season 17 of SVU has featured some pretty dark, devastatingly sad episodes. This one seems to be a bit of departure from that.  Not to say this wasn’t an emotional storyline, it was, just in a different way.

Aside from Rollins family issues, there was an underlying current in this episode of everyone suddenly becoming a bit insecure at their job – of course there was Rollins withholding information, but she brought Fin into that web of deceit, taking the issue of perceived protective non-disclosure to a whole different level. Fin has always had Amanda’s back and has done some other things that were not exactly copasetic given his job, but when is enough enough for Fin? Maybe now? Could Amanda be asking too much of Fin now, now when she really needs him?

It was obvious from her expression that Benson knew something was up with both Rollins and Fin early on and she didn’t just let it go when she found out what went down. Now, she not only has to keep an eye on the people that she thought she knew, she also has to has to deal with the addition of the younger Dodds on a daily basis. He may say that ‘what happens at SVU stays at SVU,’ but is anyone really ready to believe that from this guy? No one really knows him yet and as such no one really knows if is word is worth anything.

As Benson explains to newbie Dodds that what Fin and Rollins did fell way outside the normal procedures of department, there was a tone to her voice that seemed to convey that given all of the recent antics within her team even she herself wasn’t sure she actually believed what she was saying. But, she clearly felt she needed to say it for the benefit of Dodds position, as her number two and as the Deputy Chief’s son.

And, let’s not forget that both the ‘push-in’ rapist from Community Policing and the case against the flautist are still open cases that need attention.

There’s obviously a lot of pretty shaky stuff going on in that squad room.

Given the main storyline, I get the title Maternal Instincts for this episode, but I think something like Relative Confusion might more accurately describe all of the discord that’s happening here – within the Rollins family, with Fin, Rollins and Benson, with Benson and Dodds, and even with father and son Dodds. These people are all relative to each other and there is a heck of a lot of confusion going on; confusion that will likely continue for quite some time.

After this episode, the next installment of SVU (on 11/4) jumps back to its signature ‘ripped from the headlines’ motif with a storyline about a large religious family who become tangled in a criminal investigation after their 13-year-old daughter suspiciously gets pregnant. (Can you say ‘Duggar-inspired?’?) “Our episode is about a family with the surname Baker so their reality show is called The Baker’s Dozen,” reveals Leight. “These people are a muddled mess of a family. Their proclaimed values and their real-life actions are very contradictory. There’s a lot going on under the surface and it’s up to our team to sort it all out, which proves to not be all that easy.”

Ahh, more relative confusion – it sure makes for some compelling TV. Just keep it comin’ SVU. 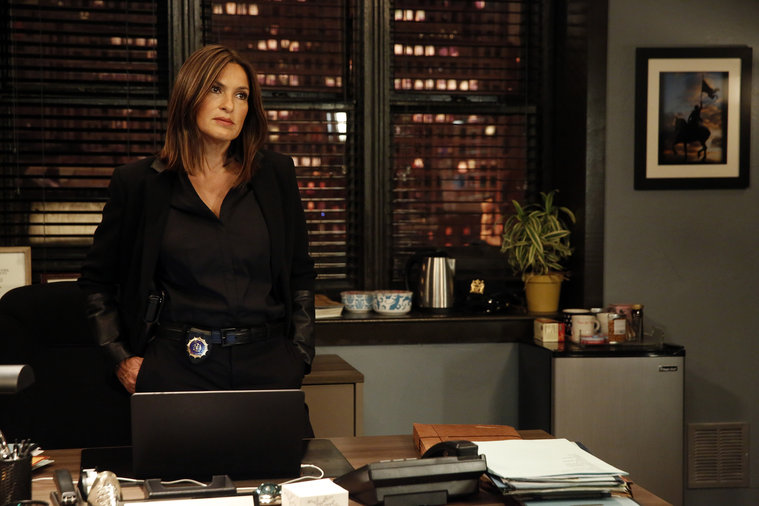