Council members joined public housing residents and members of Laborers International Union of North America Local 78 outside City Hall today to debut a bill that would create a new system of training, licensing and job standards for elimination of mold—one that would particularly impact the New York City Housing Authority.

The bill’s sponsor, Bronx Councilman Ritchie Torres, noted that state certification requirements for mold abatement work exempts public properties like NYCHA developments as well as private commercial buildings. He argued these exceptions to the rules constituted a fundamental injustice to NYCHA residents, recalling both his own asthma-plagued childhood in an authority complex and the complications resulting from Hurricane Sandy three years ago.

“We’re here because we believe the epidemic of mold in New York City is a public health crisis that requires a response from the City Council,” the Committee on Public Housing chairman said, recalling the massive suit NYCHA settled in 2013 with asthmatic tenants, who had claimed the authority’s failure to comprehensively deal with mold violated the Americans with Disabilities Act.

There are at present no city standards for mold abatement, and the bill would obligate anyone advertising or performing mold assessment or abatement services to obtain a license and instruction from the Department of Consumer Affairs. It would also obligate the licensee to create a plan for both eliminating the mold and for addressing its underlying causes and submit to the landlord and the city before beginning work, and to keep the plan on premises for the duration of the project.

Several public housing residents complained of chronic mold infestation in their homes, with subcontractors and authority employees coming in again and again to wipe the growth off with bleach and paint over it—just for the fungus to creep back again.

“They plastered over and painted it again. That was in February of this year. The mold is starting to come back again,” said Polo Grounds Houses resident Michele Holmes, who told the Observer she has dealt with mold in her apartment since the 1990s. “Licenses need to be given so we know, when people step in our homes to correct this issue, it will never, ever return.”

“You know, he was talking about the ‘tale of two cities’ before he came into office, I hope that that standard gets held when it comes to the NYCHA residents that are affected with mold, and to the people in the Rockaways and in the poor communities that are still dealing with moldy homes,” he said.

The housing authority said it was interested in cooperating and helping shape the bill’s final form.

“We are currently reviewing the proposed legislation and look forward to working with Chairman Torres on this very important issue,” a NYCHA spokeswoman told the Observer. 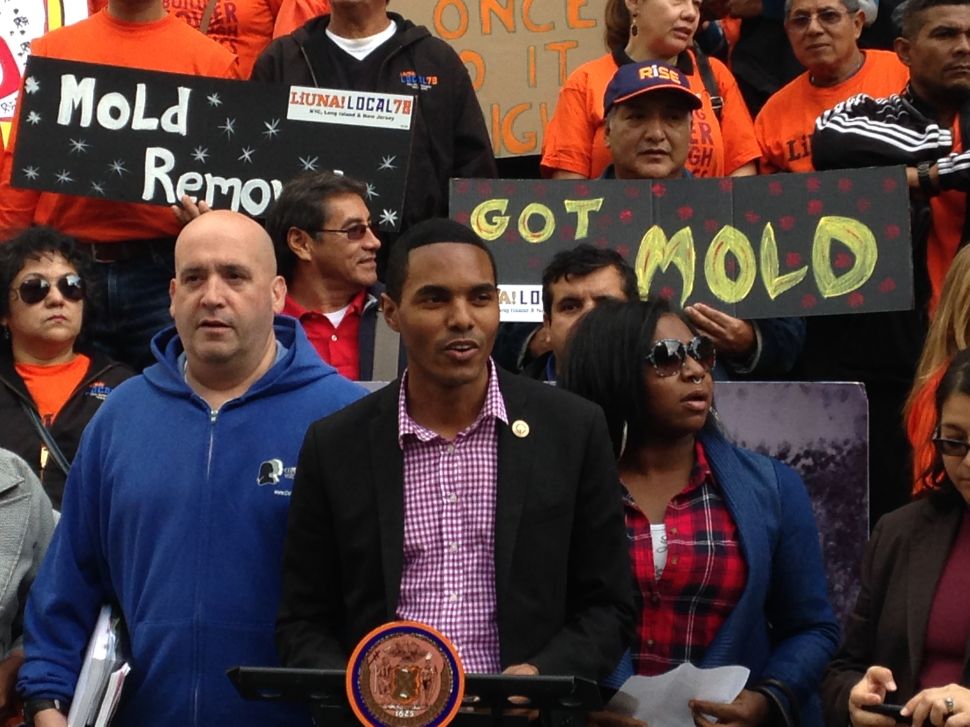