This Saturday, Love Heals, the Alison Gertz Foundation for AIDS education, will host its official dedication of the “What’s Your Sign? Mural Project” in Brooklyn’s Prospect Heights neighborhood. The ceremony, which will run from 11:00am to 1:00pm at St. John’s Place and Underhill Avenue, honors the life and work of late AIDS activist Alison Gertz.

Both Mr. Velez and Mr. Beler told the Observer they’d always wanted to work on a project together. It wasn’t until Mr. Beler admitted he was HIV positive during an interview with NY1, that Mr. Velez suggested they work with a non-profit organization that focused on prevention and awareness.

“When Frankie said we should do a non-profit, he said ‘Jeff, you’re HIV positive. Let’s do that.’ So I did research online,” Mr. Beler told the Observer. “I’d actually never heard of Love Heals, so all of a sudden there was divine intervention. I called the executive director and she loved the idea.”

Love Heals, founded in memory of Alison Gertz, is devoted to empowering youth in the fight against HIV/AIDS through prevention education and leadership development training.

Ms. Gertz was first infected with HIV at the age of 16. Hoping to make an example of her situation, she quickly became an advocate for AIDS awareness.

“People have the notion that this epidemic is over. The fact is that it has become blacker and browner, and we need to continue to have these conversations about implementing sexual health education in schools. I’m hoping that through this mural project, people can relate to our message,” Mr. Hilton told the Observer.

She died in 1992, leaving behind a legacy that today reaches up to 40,000 people every year. Artist Jeff Henriquez was asked to paint her portrait at the event.

“The real principle behind this is about meeting young people where they are and helping them better understand not only HIV and prevention, but also reproductive health. The zodiac project sort of fell into our laps. I’ve always had a love for street art. I think it has this unique ability, when done well, to really translate a story without words,” Love Heals Executive Director, Deborah Levine, explained.

The project is meant to address stigma and help young adults have conversations about sexuality. Love Heals hopes to create a space in Brooklyn where people can acknowledge that HIV isn’t forgotten.

According to Love Heals Director of Development Philip A. Hilton, the project was an exciting and innovative way to express the impact of HIV/AIDS on today’s youth.

“People have the notion that this epidemic is over. The fact is that it has become blacker and browner, and we need to continue to have these conversations about implementing sexual health education in schools. It has to be age appropriate and culturally sensitive. I’m hoping that through this mural project, people can relate to our message,” Mr. Hilton told the Observer.

The Love Heals organization is founded on the understanding that HIV doesn’t discriminate. It could happen to anyone.

Community activists, public officials and neighborhood residents are all encouraged to come out on Saturday and publicly thank the artists and curators who made this possible.

“We want to give them the kudos they deserve,” Mr. Hilton said.

For now, all 12 murals will remain in Brooklyn’s Prospect Heights Neighborhood until mid-November. Love Heals and its new collaborators will hold a silent gallery auction next month in hopes of raising money for the organization. 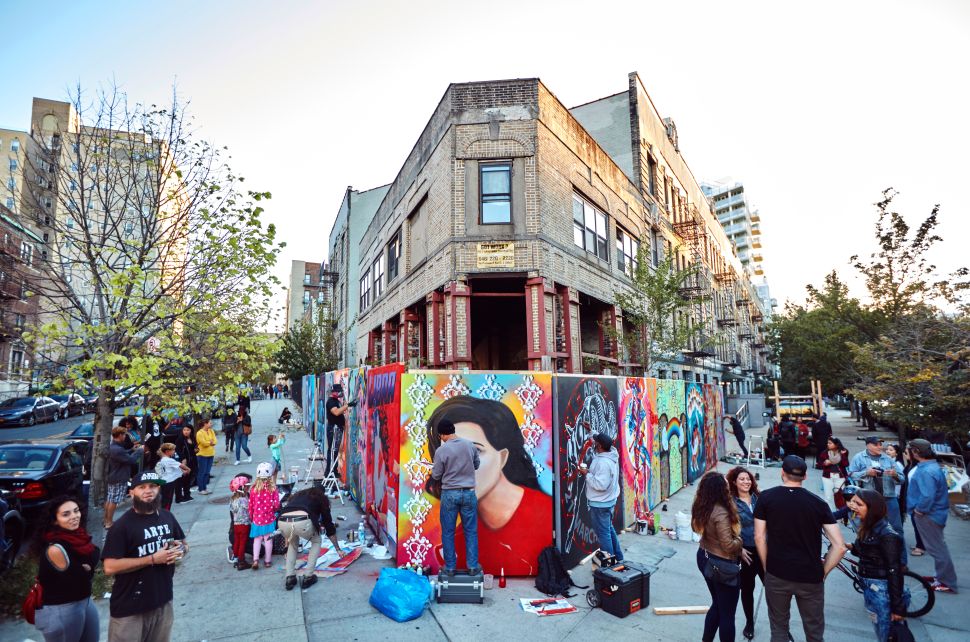