To celebrate this weekend’s premiere of the blood-splattered, chainsaw-wielding and downright groovy Ash vs. Evil Dead, we’ll be rolling out a new interview every day this week with the cast and creators. First up: Lucy Lawless.

Lucy Lawless, the only woman tough enough to be both a warrior princess and Ron Swanson’s wife, is about to enter into a whole new realm of kicking ass — the batshit world of Sam Raimi and Bruce Campbell’s Evil Dead franchise. In Starz’s Ash vs Evil Dead, Ms. Lawless plays Ruby Knowby (daughter of Raymond Knowby, the voice on the tape recorder in the very first Evil Dead). Besides that, we don’t know much about Ruby, and she barely makes an appearance in the series’ first two episodes.

But that didn’t stop Ms. Lawless from being in fine spirits when we met up at the New York EDITION hotel. I couldn’t tell if the actress’ deep laughs and good mood were part of her natural charm, excitement over the impending Ash vs Evil Dead premiere, or simply relief that for the first time in a while, Sam Raimi was in the same building as her and not throwing a bucket of blood on her head.

“You’re acting while you have this Antarctic blast screaming through this un-insolated shed in some industrial area. There’s nothing charming or comfortable about being sticky and wet, and cold.”

Observer: So why all the mystery around Ruby?

Lucy Lawless: They kind of knew where they were going with the character, but they wanted to take some time to set up the world. You have to build the world before you can destroy it. Plus, I came on a bit late, and they still hadn’t decided what the role was. First it was Ruby Knowby, then she wasn’t, then she was, then she wasn’t again. By episode NINE, they decided ‘oh, yeah she totally is.’ That’s why when people asked who Ruby was we had to be like ‘oh, she’s a mysterious character’ because really we were like ‘We don’t know! We have no fucking clue!’

But now we know. Her father Professor Knowby was killed off in the second Evil Dead, and her mother and her sister. She holds Ash responsible. So I’m going to make it hard for him to save the world.

What is it like being a familiar face, but jumping into another franchise that has the old fans, the fans from years ago?

I wanted to fit into their world tonally. Because we didn’t know what the show was. None of us knew whether it was going to resemble the second movie more than the first or the third, or be something completely new. And I didn’t want to drag any of the baggage from my earlier career. I don’t want bloody Xena in there. The physicality is quite different. I had to be careful to not make those kind of Xena sounds, which are quite natural to me when I’m fighting something. I don’t want to be Xena-esque, at all. You don’t smoosh those things together.

I love the tone of the show. It’s genuinely scary horror, but straight comedy at the same time.

Yeah, and it’s not like Scary Movie where there’s no tension. When I was a kid, horror was like that. When that little Jason jumped out of the water on to the row boat it was like “AHHH,” and the hilarity rippled through the audience. Now horror seems to just be all gore and cruelty.

As an actor, how do you toe that line? How do you know when to play something straight, or to give into the ridiculousness of it?

My take on it is that my character has to be a straight man, especially when you get around Bruce. You don’t want to occupy Ash’s space. It doesn’t help anything. Let Ash be the king of the dung heap. Jill [Marie Jones] and I especially, we play stuff straight.

I know Sam Raimi is a big practical effects guy…does having the blood and guts and all that right in front of you make it difficult to play it straight?

I know Bruce pretty well, and if he can see that I’m laughing at him, it makes him laugh too. We keep each other on the straight and narrow. But filming those effects is so not fun. You’re acting while you have this Antarctic blast screaming through this un-insolated shed in some industrial area. There’s nothing charming or comfortable about being sticky and wet, and cold [laughs].

With all the options out there, what space would you say Ash vs. Evil Dead occupies on TV?

Its very own niche. And that’s to credit Sam. The spirit of the Stooges lives on in him, plus you layer it up with this gnarly understanding and love of horror. You got a whole wacky hybrid animal. Then you have the incredible Bruce Campbell to use as a prop, to throw around like a rag doll. And it’s kind of comedy gold right there. 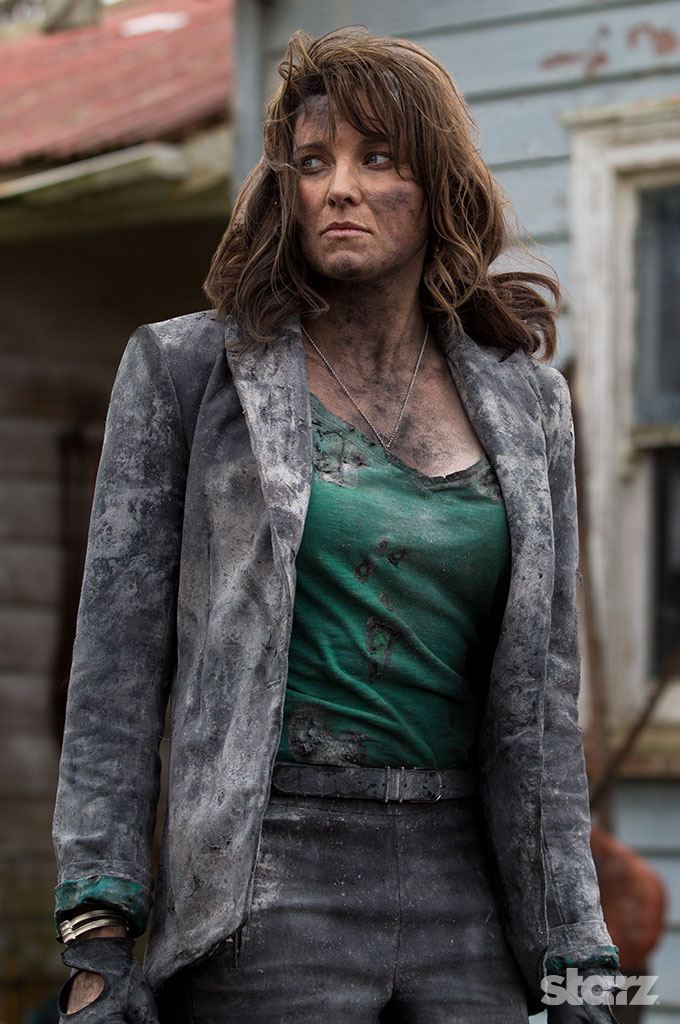