Vowing to cap the number of regulations the government can impose on businesses large and small, Sen. Marco Rubio of Florida said this morning he would fight to ensure that tech giants and start-ups like Uber and Airbnb flourish over the next decade.

Mr. Rubio, a Republican candidate for president, even cited Germany—a European power with a sprawling welfare state—as an example of a country that has adapted to the new workforce in the so-called gig economy.

“We have to realize that all of the best innovation in our economy is happening in the unregulated space. Yet Washington has imposed 60,000 pages of new federal regulations just this year, costing our private economy almost $70 billion in compliance costs,” Mr. Rubio said at Civic Hall, a Manhattan community center for tech enthusiasts.

“As president, I will put an end to this. I will place a cap on the amount regulations can cost our economy each year,” he continued. “I will also require federal agencies to include an analysis of exactly how each proposed regulation would impact competition and innovation.”

Like other Republican presidential candidates, including ex-Florida Gov. Jeb Bush, Mr. Rubio has courted the moneyed tech community and praised companies which have battled city, state and federal regulators. Mr. Rubio insisted that “never before” has the political establishment “been [so] out of touch” with Americans, who he said crave innovation.

Mr. Rubio spoke extensively about Handy, an app that helps users book on-demand cleaners and handymen, and claimed the CEO of one start-up begged him not to mention its name in his speech for fear that it would attract attention from “legislators, lawyers and competitors.”

Citing e-hail giant Uber’s battle against City Hall’s attempt to regulate their fleet and the taxi lobby’s resistance to a competitor, Mr. Rubio said tech companies were victims of a “coordinated attack from established businesses.”

“We’ve seen this play out with taxi companies lobbying to stop Uber. And here in New York, the government is spending millions to try and stop Airbnb from threatening hotel chains,” he said.

There is some irony in Mr. Rubio’s praise for Uber. The company employs David Plouffe, the architect of President Barack Obama’s two presidential campaigns, and an enemy of the GOP establishment.

Mr. Rubio offered measured praise for Germany, where overall governmental and workplace regulations are more stringent than America’s, for creating a third classification for workers who are not quite full-time employees or independent contractors.

“I believe the more America regulates, the more we create an opening for other countries to deregulate and draw jobs away from our shores,” he said. “Other nations are already scrambling to cater to the on-demand economy. Germany, for example, has created a middle ground between full-time employees and independent contractors. This classification, known as ‘dependent contractors,’ allows professionals to work for a single company, receive benefits and protections, and yet still retain control over their own work.”

Whether this is the “best option for America” is “something we need to figure out,” Mr. Rubio added. “But here’s what I know for sure: We have to change the way the political establishment in this country thinks about the new economy.”

While Mr. Rubio has never led in any early polls, he is viewed by some pundits as a top contender for the GOP nomination, especially if Donald Trump’s candidacy peters out. The youngest of the leading candidates, Mr. Rubio, who was only elected to the Senate in 2010, is trying to position himself as a candidate of the future.

“I believe free enterprise will work better in this century than it did in the last, because the new economy is all about innovation, creativity and productivity, and we are the most innovative, creative and productive people on earth,” he said. 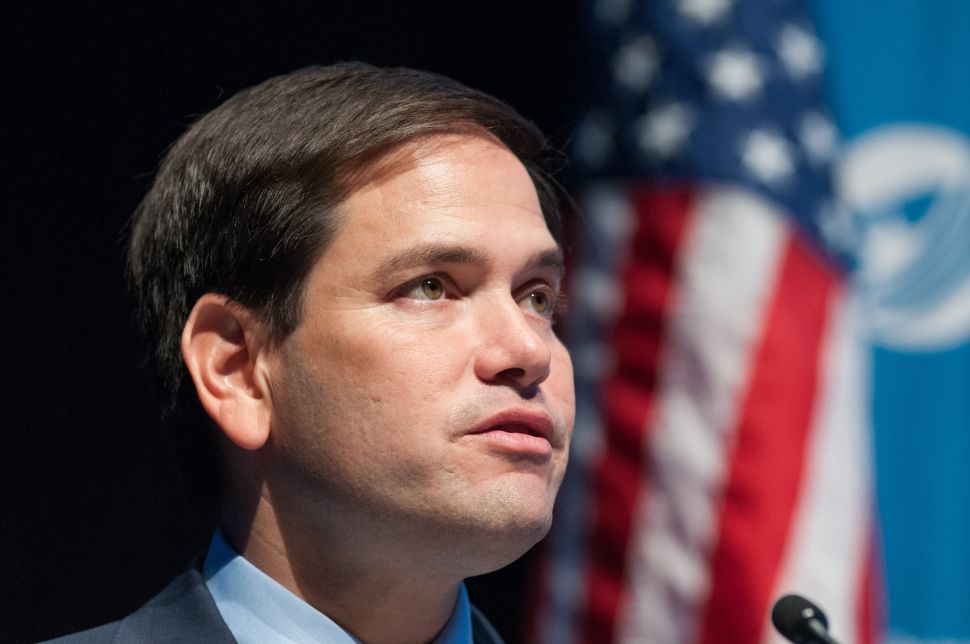