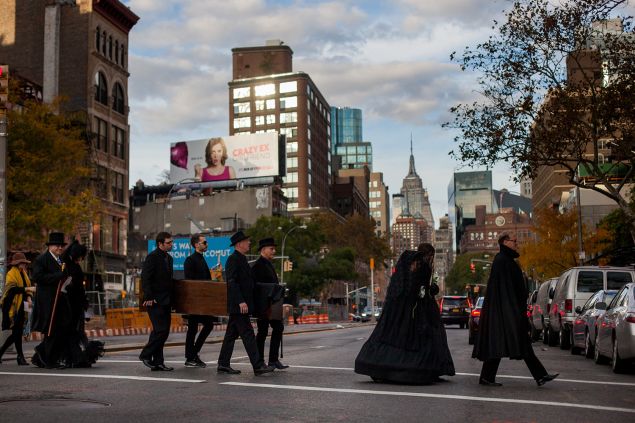 Raised eyebrows were de rigueur during the funeral procession to the Marble Cemetery. (Michael Nagle for Observer)

The drapes were drawn and the oil lamps burning low when we entered the parlor of the Merchant’s House Museum Sunday afternoon to join the mourners at the funeral of Seabury Tredwell. As Mr. Tredwell (1780-1865) had died some years earlier and none in the small crowd had any personal reminiscences of the historic house’s patriarch, it was not an overly somber occasion. Nonetheless, those in attendance dutifully warbled along to “Nearer, My God, to Thee” and reflected on the nature of life, death and 19th-century mourning customs.

We learned that end-of-life care at that time was mostly palliative; that laudanum drops were often given to ease the pain; that after a death, mirrors were covered in dark crepe stiffened with arsenic; that lilies were set out to mask the odor of decay; that neighbors left calling cards with one corner turned down to communicate their sympathy; and that wearing high necks and hoop skirts left one feeling extremely warm, as one woman turned out in a full Civil War-era mourning costume confided to the Observer. 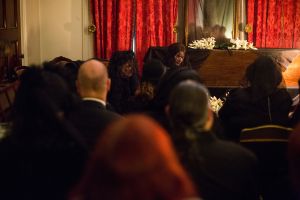 The re-enactment began in the historic townhouse’s parlour. (Michael Nagle for Observer)

As the parlor cleared out for the procession to the New York Marble Cemetery, she also confided that she’d bought her rather impressive costume on eBay and that Mr. Tredwell’s funeral, which is re-enacted on an annual basis, was the primary reason for her visit from Arizona.

“You’re a guest? And you got this? This is amazing. Can I rent you?” demanded a silver-haired gentleman.

She tittered, clasping her reticule nervously, but he assured her that he was absolutely serious—he was the director of a museum in Southampton who hoped to stage a similar spectacle next year.

“Oh, hell yeah. What a blast,” the woman said when we asked if she was into the proposition. “I’m just tickled to death that he offered.”

As we walked out of the house, we reflected that death affords some privileges rarely granted to the living. For example, never having to leave behind a prime parcel of Greenwich Village real estate: though Gertrude, the last surviving member of the Tredwell family, died in the 1930s—the Federal-style townhouse became a museum directly thereafter, with all the family’s possessions left intact—a number of reports suggest that neither she nor Seabury ever really departed. Becreped mirrors and Episcopalian rites have a somewhat spotty record of ushering people into the afterlife, it seems. 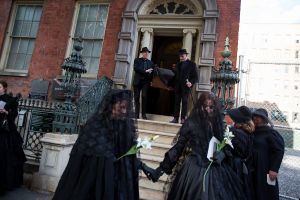 The coffin emerges from the Merchant’s House. (Michael Nagle for Observer)

Out front we met a staunch-looking woman clad in very impressive widow’s weeds, clutching a black Bible. Was she Eliza Tredwell? we asked, thinking she must be the veiled figure who’d read the psalm over her “husband’s” coffin.

“No, I’m Louise Millmann,” she corrected, adding that she’d made the movie of the funeral last year. She showed us a sepia-toned, stylized clip on her phone in which she darted in full skirts through the Marble Cemetery. “Same dress, different hoops,” she commented. “Someone borrowed my hoops last year—Oscar Party, Mrs. Lincoln—and never gave them back.”

Our conversation was interrupted by the emergence of Seabury’s coffin. The “real” Eliza Tredwell daubed at her eyes as the pallbearers swept down the front stairs. In their wake, a museum employee poked out the front door to announce that someone had left their cell phone behind.

It was a fitting prelude to the Marble Cemetery procession, in which our group attracted appreciative stares and annoyed glares in equal measure. (Of the many inconveniences borne by harried New Yorkers navigating narrow sidewalks, funerary processions are seldom one.)

Among the guests was a blue-haired woman in a black velvet 1860s-style gown accompanied by a wan friend wearing an authentic Edwardian hat and coat (they were both in the costume studies program at N.Y.U.). Another women wore a silk-edged veil that obscured an ankle-sweeping, Victorian-style velvet coat that she’d designed and had made a number of years ago.

Did she wear the coat every day? 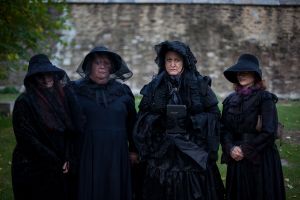 The minister intoned some final prayers at the gravesite after which we learned the somewhat disappointing news that the only Tredwell vault on the premises belonged to a different branch of the family. There were, however, a number of esteemed New Yorkers below our feet in vaults of Tuckahoe marble, “recognized as being the very best thing to keep the miasma in and the moisture out.”

The Marble Cemetery, which still presides over one to two interments a year, has always been a prestigious place, as well as exceedingly accommodating for those whose post-mortem plans change frequently, like James Henry Roosevelt, who was buried here, then unearthed to a resting place on the grounds of the eponymous Roosevelt Hospital, moved for an expansion, and finally, in the face of another expansion, returned to the Marble Cemetery, at which point his heirs threw a Champagne reception to welcome him back.

“I personally think if we’re all there is, how boring is that?” museum director Margaret Halsey Gardiner commented as guests roamed the seldom-open cemetery grounds.

The crowd began to disperse. “He’ll die again next year!” Ms. Gardiner called to a retreating figure, before she and several museum staff members surrounded the coffin for the walk back to East Fourth Street. 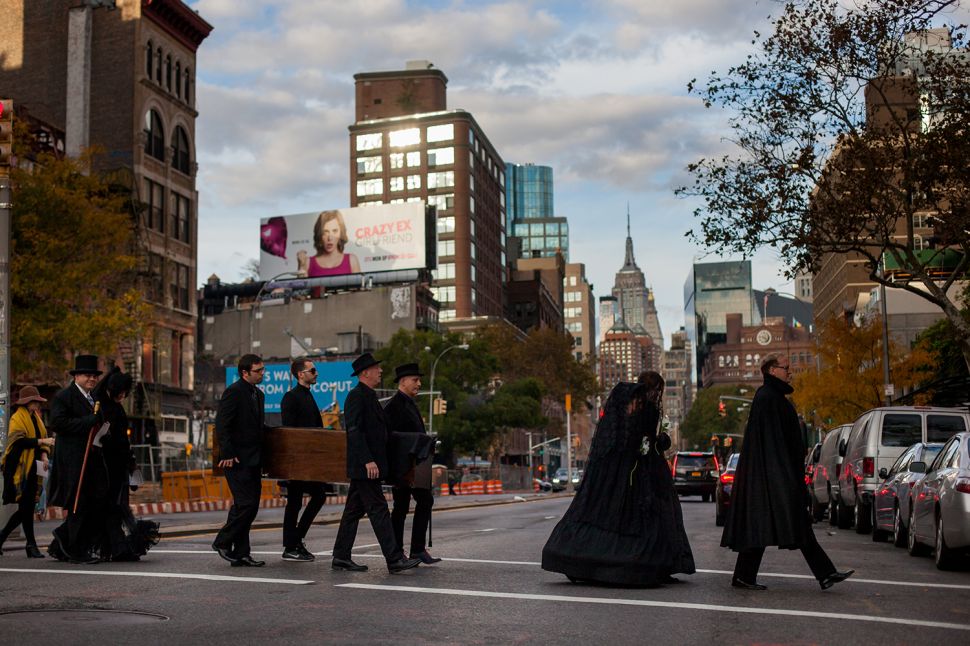