The upcoming film Suffragette tells the story of the early feminist movement in Great Britain, as women began asserting their independence and protesting for the right to vote.

The movie, which stars Carey Mulligan and Meryl Streep, has already been criticized for not featuring women of color, and for putting the quote “I’d rather be a rebel than a slave” at the center of its advertising—while the statement has been attributed to suffragette Emmeline Pankhurst, whom Ms. Streep plays in the film, some Americans saw uncomfortable parallels to slavery and the Confederacy.

The criticism got even louder today, when promotional images of Ms. Streep and Ms. Mulligan wearing T-shirts emblazoned with Ms. Pankhurst’s quote were released. Twitter commenters blasted the combination of bad marketing and tone deafness:

#Suffragette. A film that already lacks diversity has the audacity to promote their film like this 😒 pic.twitter.com/EtdM2S5iIA

"I'd Rather Exaggerate My Oppression Than Acknowledge Yours" #whitefeminism #suffragette pic.twitter.com/slEpQJDRC0

This Suffragette business shows yet again that being with the angels ideologically doesn't necessarily mean you aren't provincial as fuck.

Can condemnation on Twitter derail a film’s Oscar chances? Only time will tell.

UPDATE: Time Out London, which organized the Suffragette photo shoot, issued a statement on Tuesday, saying that “The original quote was intended to rouse women to stand up against oppression—it is a rallying cry, and absolutely not intended to criticize those who have no choice but to submit to oppression, or to reference the Confederacy.” 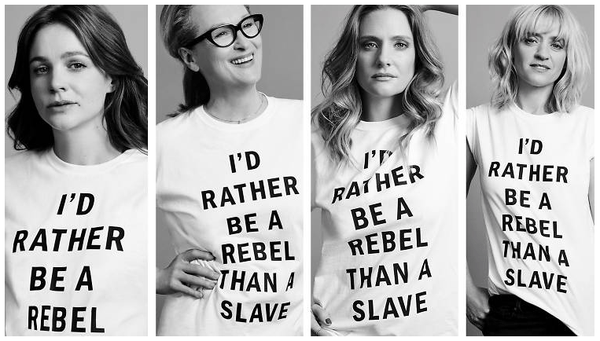