The mind-bending debut season of USA’s Mr. Robot just ended, but the discussion about who is real, what we can trust and what is even happening on this show still rages on. The cast and creative team sat down at New York Comic Con to shed what little light they could on the series’ much-anticipated season 2.

“I was just driving over here with [creator Sam Esmail] trying to pick his brain, and he wouldn’t reveal much because that’s Sam,” said Rami Malek, who stars as perpetually-hoodied hacker Elliot Alderson. “He did say ‘get ready.’ And I said ‘what do you mean?’ And he said ‘it’s going to be rough.’ I’m thinking, how much rougher can it possibly get?  He just looked at me and said ‘it’s going to get worse.'”

Mr. Esmail, for his part, was as tight-lipped as Mr. Malek described, but he did offer up an idea of what to expect while answering the only issue I had with Mr. Robot‘s first season: why would anyone stay so loyal to Elliot, while he is so obviously mentally unstable.

“You have to think about what all the members of  fSociety’s intentions are. They want to cause this awful, catastrophic event, They’re not the most balanced folks either.” Mr. Esmail told me. “But we’re going to explore that in season 2. We’re going to look at why they are following this leader who is a little off.” 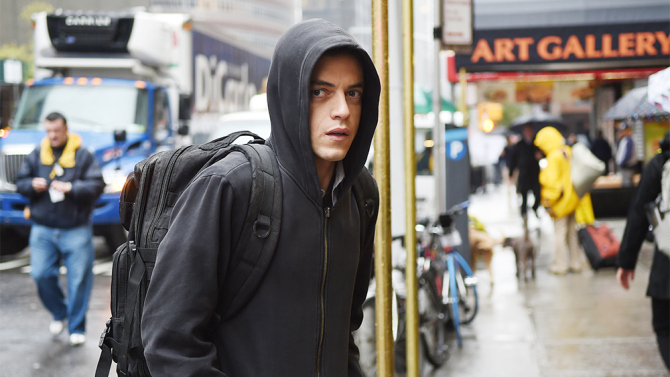