Astronomy geeks are enthusiastically awaiting the Taurid Meteor Shower, which will produce several bright meteors every night for the next couple of weeks, each hour from midnight to 3 AM local time around the world. Adding to the excitement is that this year there is a “swarm,” or rate increase of visible meteors, which are fragments of Comet Encke, a three-mile-wide chunk of ice and rock that circles the sun every 3.3 years.

As they have done for most major recent space events, a group of NASA astronomers hosted a Reddit AMA yesterday to answer users’ burning questions about Taurid and the swarm. Most of the participants appeared to be space enthusiasts, since the questions were less about the shower itself and more about potential effects.

One Redditor was concerned about the Taurid/swarm combination’s potential impact in space, but NASA meteoroid expert Dr. Bill Cooke explained that the only difference from a regular meteor shower was the more vibrant color. In fact, “these chunks will produce fireballs as bright as the moon in Earth’s atmosphere,” Dr. Cooke said (all photos screenshots from Reddit):

Another commenter was more concerned about the meteors’ effect on the space station, but Dr. Cooke made him feel better too. “Space Station is armed against orbital debris, and this provides more than adequate protection against meteoroids, so we don’t worry about it,” he said:

And others wondered how the Taurids looked in space. “You would look down on the Earth and you would see these streaks,” Dr. Cooke said. “The big difference is your perspective”:

Closer to home, a couple of morbid Redditors wondered if the meteors could cause property damage or kill people. Thankfully, the answer is no—the damage would amount to little more than a broken car window or a bruise. “Most people think meteorites are these smoking-hot rocks in the middle of a crater, when the truth is the exact opposite,” Dr. Cooke explained: 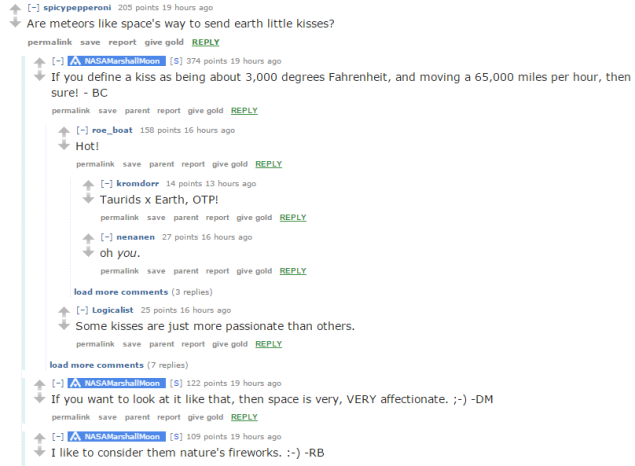 It’s good to know that even buttoned up astronomy experts have a lighter side. 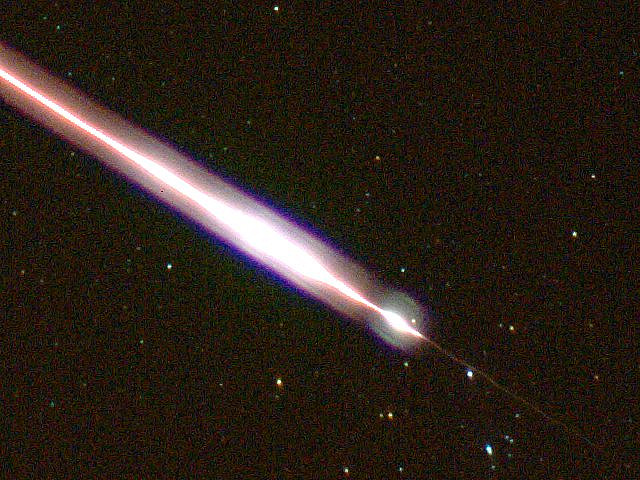