At a gun control event at Hunter College, Ms. Maloney and Ms. James both voiced support for the 1993 Brady Bill restrictions on handguns, and opposition to a federal law granting weapons manufacturers immunity from lawsuits by shooting victims—putting them at odds with Mr. Sanders’ votes in Congress on those bills. They called upon voters to punish politicians opposed to firearms regulations, and when asked specifically about the Vermont legislator’s record, the two Democrats lashed out.

“I would not vote for Bernie Sanders because of his position on gun safety,” Ms. Maloney told the Observer, drawing applause from the assembled gun control advocates around her. “I am supporting Hillary Rodham Clinton, who is for gun safety, who was for the Brady Bill, and who was for expanding the Brady Bill to close the loopholes and for holding the gun manufacturers liable for their actions, supports investing in research to make our country safe by studying ways we can make guns safer.”

The congresswoman stressed the need for Democrats to take part in the political process, and to deny support to candidates who opposed gun control.

“We have the vote, thanks to the foremothers and forefathers who fought very hard to give us the vote. And we need to use that vote. And we are having a Democratic presidential debate tonight, we should all be watching and on this issue, and others, we should hold people accountable,” Ms. Maloney said. “I think we’re so fortunate in our country to have the vote, and we should use that vote, we should remember in November how people stand on this issue and other issues.”

Mr. James, one of the city’s most prominent progressives, was much more succinct in her response—noting the hostility of the pro-gun National Rifle Association toward Ms. Clinton.

Mr. Sanders, a self-described democratic socialist, currently has a “D-” rating from the NRA, due to his past support for a federal assault weapons ban. In recent years, he has also endorsed background checks for all gun purchases, despite his opposition to such provisions in the Brady Bill two decades ago.

Some liberal critics, however, have argued he benefited in his first election to Congress in 1990 from a large-scale NRA campaign directed at the pro-gun control incumbent. The senator is a Brooklyn native, but his adopted home state of Vermont is predominantly rural with few gun restrictions and a strong sportsman’s culture.

The event at Hunter College came in the aftermath of a string of recent mass shootings and outbursts of gun violence in the city. Mr. Sanders, currently running second in the polls to Ms. Clinton, has adjusted his stances recently, as his rivals Ms. Clinton and Maryland Gov. Martin O’Malley have rolled out extensive firearms regulations proposals. The candidates will face off in a debate tonight.

Mr. Sanders announced yesterday he would be open to changing the federal law he supported in order to make gun manufacturers vulnerable to litigation from shooting victims, so long as the statute continued to protect small gun retailers.

His campaign did not immediately respond to requests for comment. 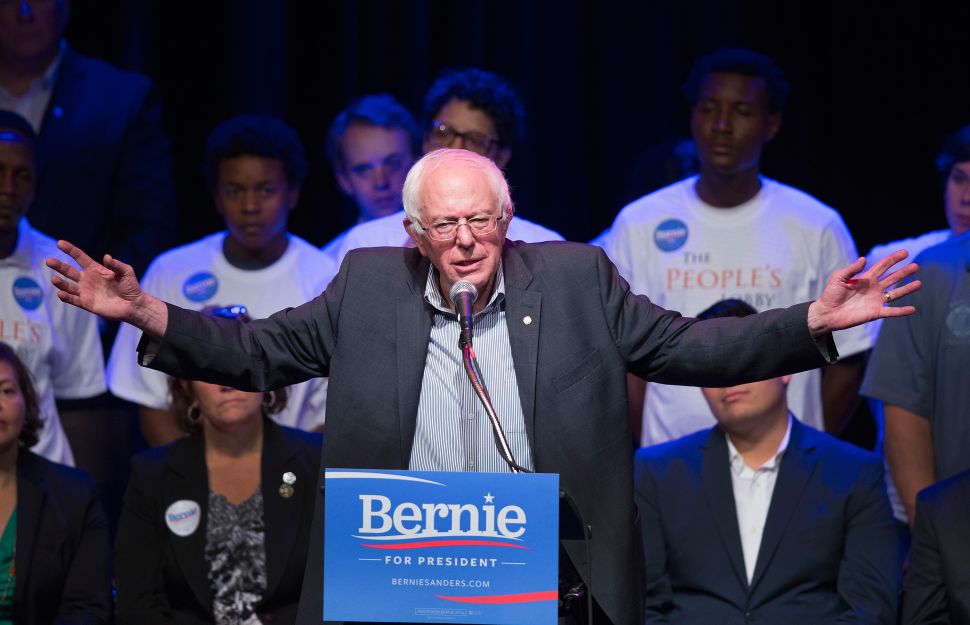