1. Planned Parenthood: The reproductive health clinic chain managed to hold onto its federal funding in the short-term spending bill passed on Wednesday, and while PP President Cecile Richards bobbled several questions in hearings this week on the non-profit’s activities, her Republican critics’ performance was so poor even conservatives groaned. A court order deprived GOP congressmen of their most potent ammunition: the undercover videos showing Planned Parenthood employees casually talking about deliberate preservation of aborted fetal tissue for research purposes. Meanwhile, polls continue to find the clinics enjoy far higher approval ratings than Congress.

2. Sen. Bernie Sanders: The insurgent socialist trailed his main rival for the Democratic nomination, ex-Secretary of State Hillary Clinton, $26 million to almost $29 million when the most recent fundraising numbers came out Wednesday night. But for Ms. Clinton to have a candidate once seen as such an underdog biting at her heels could hardly have left her camp feeling assured. Especially considering Mr. Sanders’ haul came from some 650,000 individual donors compared to her 250,000, which ups the likelihood that the former senator from New York will begin to directly engage her Brooklyn-born opponent in the next few weeks—especially at the first Democratic debate on October 13.

3. NYPD Inspector General Philip Eure and Department of Investigations Commissioner Mark Peters: The city ombudsmen dropped a damning report yesterday claiming the NYPD had at best a “patchwork” system for tracking uses of force by cops, and that it rarely disciplined officers who deployed violence without justification. Police Commissioner Bill Bratton displayed his public relations savvy by rolling out a plan to keep tabs on physical encounters that afternoon, with the apparent aim of eclipsing Mr. Eure and Mr. Peters’ findings in the media. But that’s just a sign that the two investigators got some results, even if the results didn’t cover the whole problem they exposed. And when Mr. Bratton demanded an apology from Mr. Eure for saying his department had been in “the dark ages,” Mr. Eure refused.

1. Anybody who lives near the Atlantic Ocean: The image of Hurricane Joaquin, a menacing Category Four storm, spiraling on the weather maps near the Eastern seaboard inevitably triggered flashbacks to 2012’s Superstorm Sandy. The threat of catastrophe and the emergency response preparations were even enough to get Mr. de Blasio to say, at first, that he’d actually stay in New York City for a couple of days. The powerful weather system is currently pummeling the Bahamas, but the silver lining of the storm is that it appears to be headed east and will likely not directly strike any American coastal cities—just hurl drenching rainstorms and fierce winds their way. Which means Mr. de Blasio is already on his way to the airport. But Joaquin may yet hit Bermuda, meaning former Mayor Michael Bloomberg may want to spent Saturday putting the windows down and unplugging appliances at his vacation house there.

2. America: The country saw its 294th mass shooting of the year yesterday at Umpqua Community College in Oregon, which is pretty remarkable considering we’re in the 274th day of 2015. The late killer, Chris Harper Mercer, was reportedly a self-identified mixed-race conservative Republican who admired the Nazis and the Irish Republican Army and hated organized religion so much he deliberately singled out Christians in his rampage—so political fingers are sure to be pointing in just about every direction imaginable over the next couple weeks. Except one, that is: towards some kind of policy change that might prevent these things from happening.

3. The open-air merchants of Times Square: The motley assortment of Muppets, superheroes, CD hawkers and body-painted babes making a living at the crossroads of the world may soon find their favorite marketplace not so free, if the recommendations the mayor’s task force unveiled on Wednesday go through. While they won’t rip up the plazas or outlaw the characters, the panel claimed it found a way to regulate the entrepreneurs’ activities without violating their First Amendment rights by having the Department of Transportation take over the pedestrian plazas where they ply their trades, and having the Council rezone the area to enstate special rules about commercial activity. Exactly the kind of anti-capitalistic big government impositions you would expect in #deBlasiosNewYork.

Local electeds looking burnish their liberal credentials piled onto the Planned Parenthood issue early in the week—but then here came the story of the hurricane.

Honestly, haven’t we seen this movie before? The speeches over the Oregon shooting have already started, but we all know where they’ll all end: right back where we began. The stopgap spending bill Congress passed to keep the government running expires in December, which means the feds will face the cliff again in just two months—only without the leadership of the pragmatic House Speaker John Boehner. And Mr. Bratton will continue to try to juggle the roles of reformer and adamant defender of the police.

On the bright side, you might be able to get that Elmo costume you wanted for Halloween real cheap.

After Mr. Boehner’s announcement that he would resign at the end of this month achieved the impossible last Friday by overshadowing the Pope, New York GOP Chairman Ed Cox decided it was best to wait til after the weekend to put out a press release remembering him as “a friend to the New York Republican Party.”

Another DOI report finds a direct correlation between the mayor’s absence and extreme weather events.

Fall is in the air, so Mr. de Blasio will likely be visiting someplace warm. 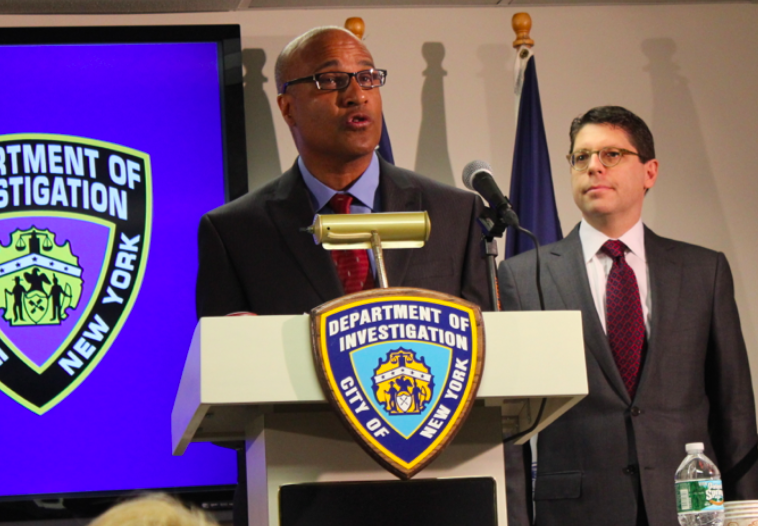