The theme has been revealed for the much-anticipated 2016 Met Gala, set to take place on May 2, 2016: “Manus x Machina: Fashion in an Age of Technology.”

The museum’s exhibition will not be an exploration of Bella Hadid’s partnership with Samsung or Diane von Furstenberg’s attempts to glamorize Google Glass, but rather, something deeper: the apparent conflict between hand-made and machine-made fashion.

“The Costume Institute’s spring 2016 exhibition will explore the impact of new technology on fashion, and how designers are reconciling the handmade and the machine-made in the creation of haute couture and avant-garde ready-to-wear,” the Met’s website says. “The exhibition will propose a new view in which the hand (manus) and the machine (machina), often presented as oppositional, are equal protagonists.”

More than 100 ensembles will be on display at Manus x Machina, spanning time from an 1880s Worth gown to a 2015 Chanel suit, according to the site. The exhibit will chart the history of haute couture throughout the 19th century—particularly the ways in which it was affected by industrialization and mass production. How can a one-of-a-kind, handmade garment compete with a machine-made ready-to-wear collection—and vice versa? The Met promises that traditional haute couture garments will be displayed next to their machine-made counterparts—items adorned with intricate embroidery, feathers, lace and leather placed next to those made with 3-D printing, laser cutting and computer modeling. 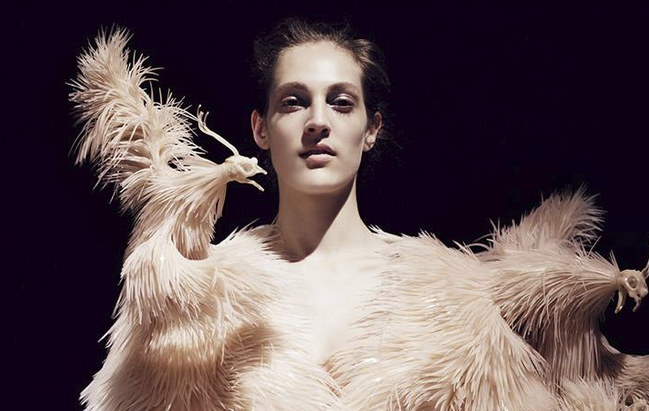