At a Tuesday candidate forum in LD24, Assemblyman Parker Space, who is up for reelection this year, declared: “There is nothing better than an unregistered gun, believe me.”

[Click here to see the video from the New Jersey Herald. Jump to 56 minutes to see the remark.]

The statement came after the discussion turned to current gun laws in the state of New Jersey. Space made it clear that he and his running mate Gail Phoebus “support the second amendment” and think there are already too many restrictions in place on gun ownership in New Jersey.

After Space made the remark, his opponent Democrat Michael Grace asked him if his statement meant Space had an unregistered gun.

“I’m saying is that when the liberals take over everything they are not going to be able to track you down and take your weapons away from you,” Space replied.

Gun laws in the state have been a hot button topic as of late. Last week, the much-discussed mental health gun legislation that requires law enforcement to be notified when a mental health record is expunged in order to by a firearm—which has originally been vetoed by Governor Chris Christie—was overridden by the state senate. 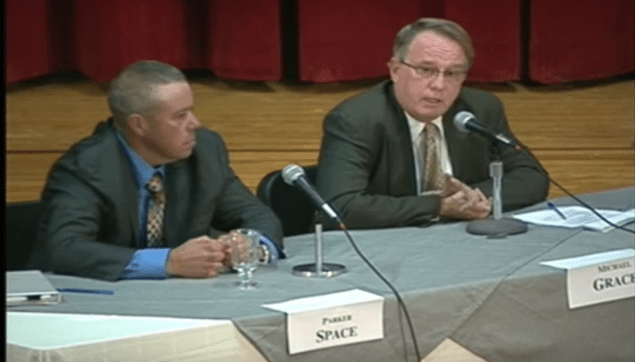