The latest entry in Patti Smith’s ever evolving, cross-disciplinary oeuvre, M Train is a nonlinear narrative about writer’s block. It’s literary, lucid and dreamy. Mourning the passing of her second husband, Fred “Sonic” Smith, bouts of insomnia and displacement overcome her—all the culprits of mental stagnancy. That she transforms such ennui into elegant prose, then, is a testament to Ms. Smith’s command of memory.

While Just Kids is very much about looking back with wistful nostalgia, M Train’s memories are meant to sustain her present, as Ms. Smith conjures whatever brings wisdom.

Though the novel is marketed as a sequel to Ms. Smith’s memoir Just Kids, which won the National Book Award for nonfiction and has since been optioned into a miniseries for Showtime, any comparison somewhat belies the spirit of M Train. As a snapshot New York in the 60’s and 70’s, Just Kids focused on Ms. Smith’s complicated and soul-nourishing relationship to Robert Mapplethorpe. Now, M Train comes during a resurgence of interest around the history and aesthetic of 70’s-era New York—Garth Risk Hallberg’s novel City on Fire or Marty Scorsese’s upcoming HBO drama Vinyl, for example.


More chronological and rooted in a firm sense of place than M Train, Just Kids placed Ms. Smith directly in storied musical institutions like Max’s Kansas City and The Chelsea Hotel. But aside from the fact that both novels are heady meditations on the passing of a lover, M Train finds Ms. Smith wandering much more—focused much less on music—as she travels from place to place without a clear trajectory. While Just Kids is very much about looking back with wistful nostalgia, M Train’s memories are meant to sustain her present.

“It’s not so easy writing about nothing,” Ms. Smith tells herself in Greenwich Village coffee shop Café Ino, which closed its doors in 2013. Sitting at her usual table, Ms. Smith finds her “portal to where.” In the Proustian style of looking back, she reveals how her dream of one day owning a coffee shop was deferred when she fell for Fred “Sonic” Smith. When her mind then drifts to a time that they traveled to French Guinea, Ms. Smith remembers every detail about the ruins of Saint-Laurent Prison. “Fred and I moved about in alchemical silence, mindful not to disturb the reigning spirits,” she writes.

Ms. Smith searches for inspiration in her grief, from writers she admires and even television shows, which keep her company during sleepless nights alone.

Punctuated by black and white photography, such flashbacks give Ms. Smith’s narrative a sense of intimacy, no matter how esoteric the memory. She mentions the literature-masquerading-as-travelouge works of W.G. Sebald, and, further along, recalls William S. Borroughs telling her the best coffee in the world is in Veracruz, Mexico then sets out to track it down. She later remembers interviewing Paul Bowles toward the end of his life, remarking on his emptiness.

The glut of writers and philosophers who posses her mind come to a head when she evokes Nietzsche while thinking about her father: “Thus he was born at the appointed hour when certain individuals are granted the ability to grasp the mystery of the eternal recurrence of all things.”

Much like the writers she credits as inspirations, Ms. Smith’s prose often meanders a bit before reaching profound epiphanies, but they eventually come.

By emulating all the writers who bring her inspiration, the narrative rewards a well-read reader, but strays from the simple cohesion that earned Just Kids such popular acclaim.

“All writers are bums,” she writes, speaking to the spirits of Japanese short-story author Ryūnosuke Akutagawa and fiction writer Osamu Dazai. “May I be counted among you one day.”

When Hurricane Sandy hits The Rockaways, Ms. Smith attempts to make sense of the disaster by lamenting the fact that she just purchased a bungalow on the peninsula. Another friend’s cafe has disappeared, this time on the beach, and the train is “crippled and it’s sad bowels ripped apart, thousands of salt-coated wires, the gone intestines of motion.” She recalls that Fred was born during an electrical storm, and can’t help but feel her sense of stagnancy is again connected to his passing. “Why is it we lose the things we love, and things cavalier cling to us?” she wonders. It’s an echo to the lyrics of another New York Rock’n’Roll poet gone to soon, Johnny Thunders, who sang, “You can’t put your arms around a memory.”

Maybe that’s the point though. Much like the writers she credits as inspirations, Ms. Smith’s prose often meanders a bit before reaching profound epiphanies, although they do eventually come. That the novel never feels uneven is a testament to Ms. Smith’s attention to detail.

“I’m going to remember everything and then I’m going to write it all down,” she realizes later after identifying the mysterious cowboy spirit guide who ushers her in and out of dreams, a veritable deity who materializes to advise her at moments most dire. “An aria to a coat. A requiem for a cafe. That’s what I was thinking, in my dream, looking down at my hands.”

Ms. Smith finds new epiphanies at each “station” in M Train, and such moments will richly reward readers willing to see her densely annotated route of her rituals, thoughts and vulnerabilities for what they are—moments of solace, on a train traveling toward that destination called peace of mind. 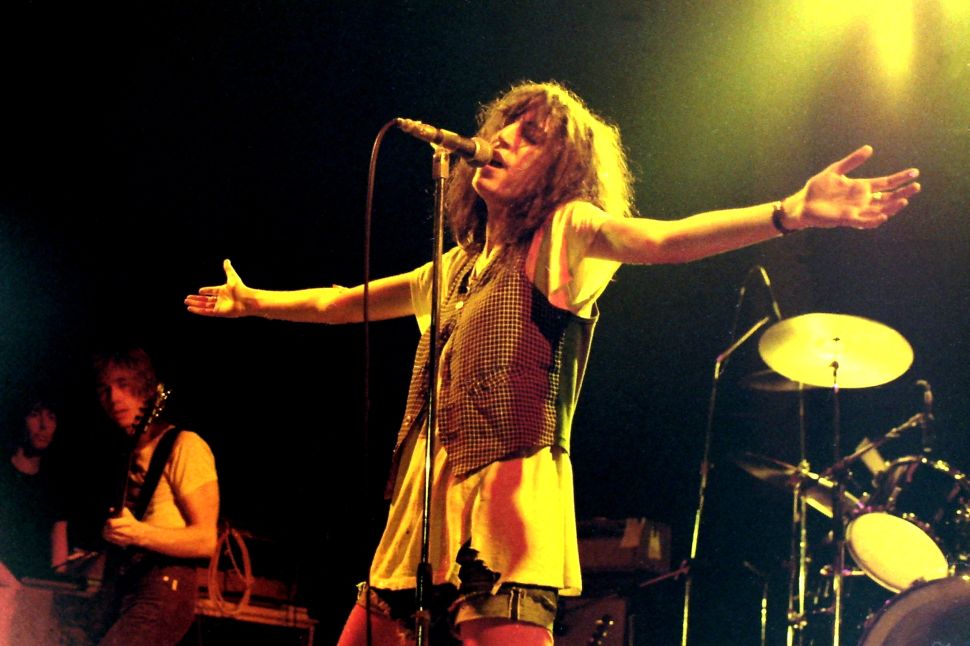