It’s Friday in New Jersey, where state voters and political donors seem to have little interest in Chris Christie’s presidential hopes. Meanwhile, drama still runs high in the races for the 38th and 2nd districts, and Democrats are benefiting from their support of public employees while Republicans are having trouble.

Election Cycle Marred by Statewide Troubles for the GOP
This year the New Jersey Republican Party has been floundering.
This cycle has been marked by few funds raised in some of the more competitive districts, scandals that have seemingly crippled candidates and infighting due to a lack of perceived support from county officials.
Alyana Alfaro, PolitickerNJ Read more

On PILOT Debacle, Mayor Guardian Cites Shifting Economic Tide for City and County
Fresh from a press conference kicking off the construction of a $43 million seawall and boardwalk construction project a few blocks from the barred and locked Revel casino, Atlantic City mayor Don Guardian talked this year’s Assembly race and his own disagreements with his fellow Republicans in the county, and with candidate Chris Brown.
JT Aregood, PolitickerNJ Read more

County Chairmen Lash Out Following LD2 Vote-By-Mail Decision
Following a decision from the Atlantic County Clerk’s Office to reject mail-in ballot applications from about 90 county residents who received partially filled-in forms from a pro-Democratic super PAC, the chairman of the county Democrats is calling the move “a contrived political stunt” by his Republican counterpart.
JT Aregood, PolitickerNJ Read more

PAC TV Ad Goes After Still-Standing DiPisa in LD38
Left standing after his running mate got out – then by default – got back in the LD38 race, Republican Mark DiPisa now finds himself a lone target by association of his disgraced former (and current ballot-bracketed) running mate.
Max Pizarro, PolitickerNJ Read more

In Bergen Freeholder Race, Dems Raise Over Ten Times More Than GOP
According to ELEC reports filed by candidates running for Bergen County Freeholder, Bergen County’s Democrats are significantly outraising Republicans who are vying for spots on the freeholder board.
Alyana Alfaro, PolitickerNJ Read more

Bramnick Reiterates debate Challenge to Prieto
Following Speaker Vincent Prieto’s (D-32) excoriation of the GOP leader over his stated willingness to give a home in his caucus to disgraced LD38 challenger Anthony Cappola, Assembly Minority Leader Jon Bramnick (R-21) doubled down on his challenge from earlier this year to Prieto to debate the issues with the Republicans.
Max Pizarro, PolitickerNJ Read more

Assembly Speaker Prieto Denounces Bramnick for Stance on Cappola
Assembly Speaker Vincent Prieto (D-32) issued a statement Thursday speaking out against Assembly Minority Leader Jon Bramnick (R-21), who said during a press conference Wednesday that he would not be taking further steps to remove Assembly candidate Anthony Cappola from the ballot in the 38th district.
JT Aregood, PolitickerNJ Read more

Democratic candidates see sizable return for stance on public pensions
The poor condition of New Jersey’s public-employee pension system may not be getting a ton of attention in key state Assembly contests this fall, but it’s an issue that nonetheless seems to be having a big influence on the 2015 elections.
John Reitmeyer, NJSpotlight Read more

Sen. Menendez spent almost $730K on legal defense in past three months
Sen. Bob Menendez raised almost $471,000 for his legal defense fund between July and September, and the fund spent nearly $730,000 as his lawyers filed more than a dozen motions, nearly all of them rejected, that sought to have his corruption indictment thrown out.
Herb Jackson, The Record Read more

N.J. lottery ticket sales on track to meet budget projections
Increased sales mean New Jersey’s lottery contribution to the state budget is on track to meet its target for 2016 after falling short the first two years of a long-term contract with a private operator.
Dustin Racioppi, The Record Read more

Christie: Obama right to keep troops in Afghanistan
Gov. Chris Christie said President Barack Obama is doing “the right thing” by keeping thousands of troops in Afghanistan beyond 2016, abandoning his goal of removing all U.S. forces from the fragile nation before he leaves office.
Michael Symons, GannettNJ Read more 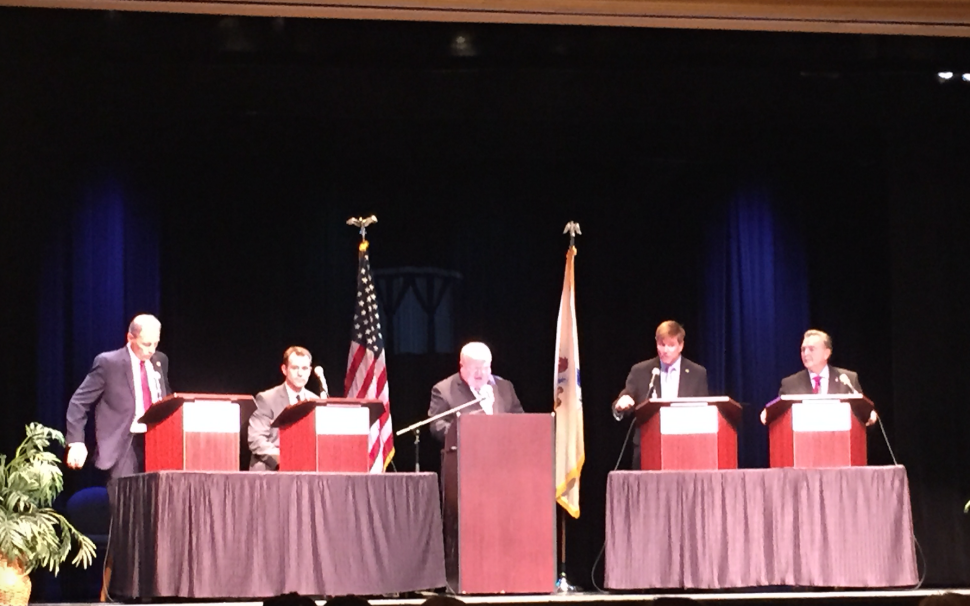