It’s Friday, the end of the week and close to the end of this year’s assembly campaign, where independent groups are pouring in money, the most closely watched races are too close to call and embattled candidates are not going down easily. Meanwhile, Bridgegate’s David Wildstein has left the Garden State and the New York Times is calling on the governor to leave the presidential race.

Quote of the Day: “You know, it’s a vice. They prey on the poor, they prey on the lonely. Only casino owners get rich.” – Atlantic County Executive Dennis Levinson, on the plan to expand casino gaming in New Jersey.

Incumbent Vulnerability Tracker: Who is Teetering on the Brink?
There’s less than one week to go before Election Day 2015.
Who’s vulnerable?
Max Pizarro, PolitickerNJ Read more

ELEC: Independent Spending This Cycle Up to $9.5 Million, or 42% of Total Spending
Independent spending by special interest groups is playing a big role in battleground legislative districts, according to the Election Law Enforcement Commission (ELEC).
Politicker Staff, PolitickerNJ Read more

Ben Dworkin Weighs in on Next Week’s Assembly Elections: ‘Too Close to Call’
In the last days before next week’s Assembly election, PolitickerNJ spoke to Ben Dworkin, professor of political science and director of the Rebovich Institute for New Jersey Politics at Rider University, to get his take on what is slated to be the state’s most poorly attended election in more than fifteen years.
JT Aregood, PolitickerNJ Read more

Stockton Poll: In LD2, Incumbents’ Leads Hanging by a Thread
Amid the muzzle flashes of an ongoing air-war mostly perpetrated by financially muscular Democrats and their attendant PACs, the incumbents hold slender leads in the 2nd Legislative District Assembly election, according to a Stockton Poll released today.
Max Pizarro, PolitickerNJ Read more

Atlantic County Executive’s Parting Shot For 2015: Casinos ‘Destructive’ by Nature
With the second district’s highly-profile Assembly election drawing to a close, the question remains whether legislators pushing for the North Jersey casino referendum next year will look to Atlantic City and its casinos’ economic free-fall as an unfortunate case or a cautionary tale. Atlantic County Executive Dennis Levinson is hoping for the latter.
JT Aregood, PolitickerNJ Read more

Bramnick and Assembly Republicans Start Throwing Punches as Election Winds Down
As the Assembly election dies down and legislators start filing back into the capitol, Assembly Minority Leader Jon Bramnick is getting an early start lashing out at Democratic leadership. Citing dark money and what he and other prominent Republicans described as Democrats’ inaction on budget and tax reform, Bramnick said Thursday that it wouldn’t matter for moving reform bills forward if Governor Christie were “on the moon.”
JT Aregood, PolitickerNJ Read more

Clubbed by Dems PAC Ad, Angelini Counter Punches in LD11
Blitzed in LD11, where General Majority PAC is spending money for Democrats as part of a statewide $4 million campaign, Assemblywoman Mary Pat Angelini (R-11) struck back in a statement, calling the PAC a purveyor of “untruthful and vicious” messaging in support of her opponents, Eric Houghtaling and Joanne Downey.
Max Pizarro, PolitickerNJ Read more

A Breakthrough Night for Ted Cruz
There is no doubt as to who was the gold medal winner of the CNBC GOP presidential debate last night: Ted Cruz. The silver medal winner was Marco Rubio. They both scored major points by blasting the major losers of the night: the outrageously biased panel of moderators of CNBC. These moderators made Rachel Maddow look like the epitome of fairness.
Alan Steinberg, PolitickerNJ Read more

PNJ Editorial: Late in the Day Thoughts on Last Night’s Prez Debate
Something of the pallor of doom came into the cheeks of Jeb Bush, slavish in his attempt to channel the older generation manners of a doting father and yet saddled with a world that has moved on, leaving even his devilishly brutish brother in some other sphere of behavioral science.
PolitickerNJ Editor, PolitickerNJ Read more

Christie vows to finish Sandy recovery before term ends
Gov. Chris Christie vowed Thursday, on the third anniversary of Hurricane Sandy, to assist everyone affected by the storm before his time as governor ends.
Myles Ma, NJ.com Read more

Tax cut petition delivered to Trenton; most of Assembly for reform
The Asbury Park Press citizen petition calling for reform of New Jersey’s highest-in-the-nation property taxes prompted one of the state’s top lawmakers to promise Thursday to press for changes as more than half of his fellow Assembly members signed the Press’ tax reform pledge.
Bob Jordan, Asbury Park Press Read more

Lakewood’s invisible election: Candidates quiet
The township’s roads and other infrastructure are struggling to keep up with the pace of development, and another budget crisis looms over how to fund courtesy busing for thousands of local schoolchildren.
Shannon Mullen, Asbury Park Press Read more

Will Democrats Continue Dominance in Three Essex County Districts?
The vast majority of legislative districts in New Jersey are considered safe for Assembly incumbents — and the three districts covering most of Essex County are no exception.
Hank Kalet, NJ Spotlight Read more

Let the voters decide that Chris Christie is horrible
I’ve noticed recently that newspaper editorial pages really, really want a lot of people to resign or stop running for office or at least stop doing whatever the hell it is that they’re doing. This is not totally a new phenomenon — the Inquirer (and some other big papers) famously called in 1998 for Bill Clinton to resign over the Monica Lewinsky affair, a classic case of what-newspaper-editorial-writers-care-about being way out of whack with the everyday concerns of regular folks who, at least potentially, buy newspapers.
Will Bunch, Philly.Com Read more 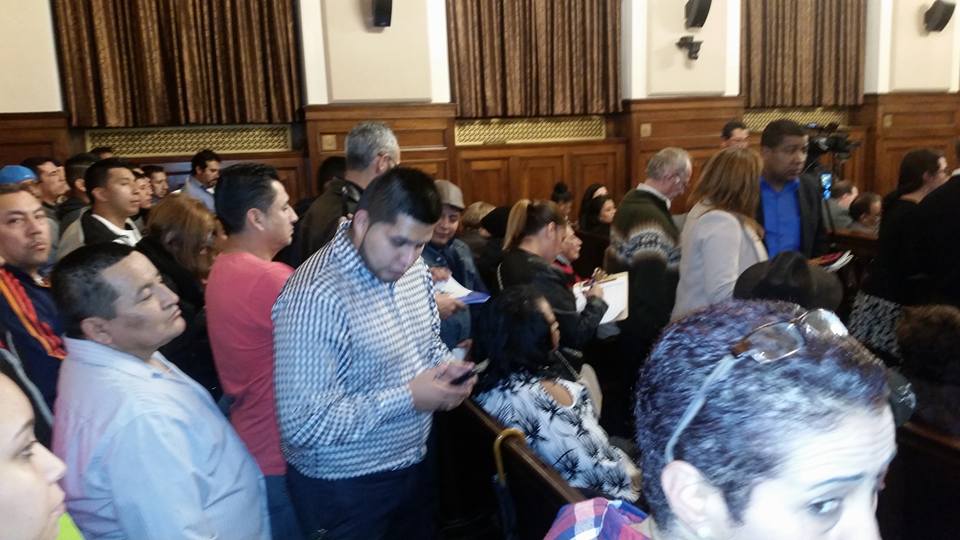