While sipping scotch at a private gallery near Hudson Yards, the Observer met with chef, author and TV star Anthony Bourdain. The star of CNN’s Parts Unknown had just posed for 100 or so photos (including one with event crasher Martha Stewart) at an event for Balvenie whiskey, the first product to earn his endorsement throughout his decades in the public culinary eye. During our chat, Mr. Bourdain lit up discussing his fast-food favorites and grew somber recounting memories of working in restaurants.

What’s the most accurate title for your role on Parts Unknown: reporter, food critic, celeb chef?

No, no, no. I’m a writer and producer of a television show that I also appear in.

When abroad, street food is something you praise regularly. Is there a NYC sidewalk snack that’s superior to the rest?

The NYC street food that I enjoy most is also in many ways the worst. You know those horrible street fairs where they sell stale spices and funnel cakes, where it’s always the usual suspects and there’s nothing interesting? The nasty sausage and pepper heros there—I can’t resist them. They’re greasy, they’re disgusting, there’s nothing good about them and I have a violent, unpleasant physical reaction everytime I eat one, but I cannot resist. And I like a dirty hot dog.

What new NYC restaurant excites you?

I’m sort of out of the loop from traveling so much, but Baekjeong in Little Korea that opened a little over a year ago. I’ve been really enjoying that and going there a lot.

‘I talk about how I’ve become this overbearing, psychotic Ina Garten, smothering my family, and food as an expression of love.’

After eating fermented shark, a raw seal eyeball and an entire live cobra, you said the most disgusting thing you’ve eaten is a Chicken McNugget. Do you have a guilty pleasure fast or packaged food—say instant ramen or the Chik-fil-A original?

The mac and cheese at Popeyes. I know how to make a good macaroni and cheese and do it right with real cheese. I don’t know if this is real cheese, probably not, or even real macaroni. But the heart wants what it wants.

In your book Kitchen Confidential, you say working holidays and always being the busiest when the rest of the world is just getting off work has given you a somewhat peculiar world-view. What do you see that the nine to five world doesn’t?

You see your customers only at their best and their worst, when they’re filled with hope and confidence and when they’re needy, angry and bitter. You get a very distorted picture of what the real world is like. I had no understanding, and a yearning even to understand, what it’s like to have a child, to own a home, have health insurance, have a weekend off—all of the things I saw as normal. I only understood people in the restaurant business, people like me. I could look out in the dining room and tell what people would order. I could say, ‘they’re all going to order the salmon’ or ‘I should thaw out more steaks,’ but I had a very narrow view of the world. It’s liking living aboard a submarine.

How has that changed now that you’re doing other things?

I’m overcompensating in a lot of ways. I talk about how I’ve become this overbearing, psychotic Ina Garten, smothering my family, and food as an expression of love. I love being a dad, in some ways maybe too much. I really take an enormous delight in doing ordinary, everyday things. Barbequing in the backyard on vacation, I feel a sense of elation that would just be disproportionate to the reality that most people live in. Walking my daughter to school and picking her up, I’m reduced to tears regularly. Cooking holiday dinners at home for family—these are things I never thought I’d experience.

You recently learned Brazilian Jiu Jitsu and just earned your blue belt in August. Why’d you take up the sport and how far do you plan to take it?

My wife got me into it, sort of as a joke. She’s very serious about it and is essentially a professional martial artist. It’s probably the hardest thing I’ve ever done in my life. The Japanese talk about ‘beginner’s mind,’ the sense that you show up every day as if you know nothing and try to learn even if you’ve been doing the same thing for years. Here, I actually do know relatively nothing, so it’s like being at the bottom rung in the kitchen when I started at 17. There’s so much to learn and no end to what you learn, and the incremental satisfaction of sucking a little less everyday is just very deeply satisfying to me. So I have no expectations other than the hope I will be a little less awful tomorrow, and I think it’s unlikely in the extreme that I’ll live long enough to be a black belt.

If you had these skills in your days in the kitchen, what would a chef have to do for you to clock him?

I don’t know—it probably wouldn’t have taken much. 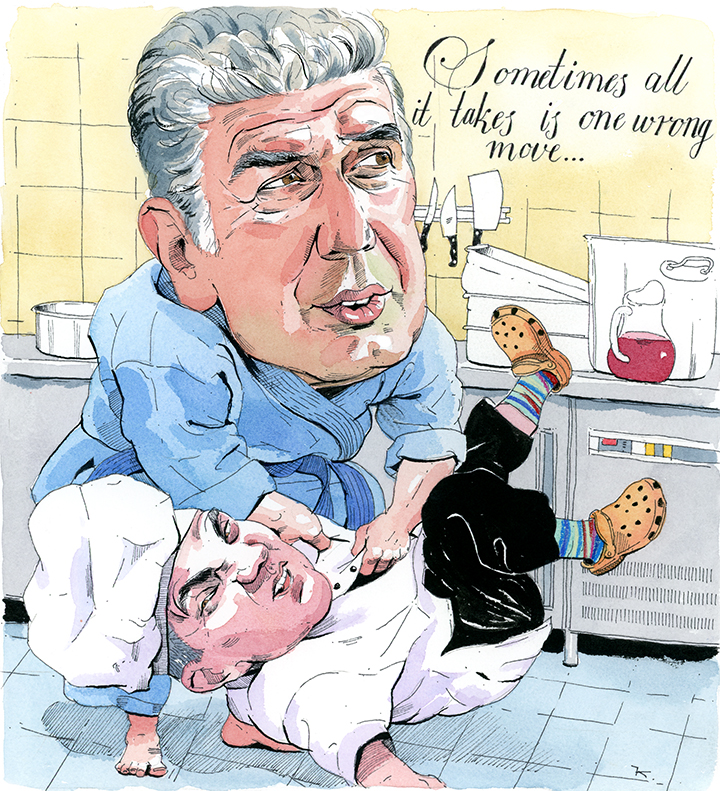