When you lack a sense of shame or proportion, you can make up all sorts of far-fetched stuff to assert phony points that insult the President of the United States and delight all your hard-core viewers.

We saw this anti-American approach again Tuesday night on Fox News Channel when host Megyn Kelly of “The Kelly File” tried to attack President Barack Obama as an elitist, maybe a racist, and anti-religious as well.

“Whoosh-WAAAH!” went the recorded Fox urgency noise and the words “BREAKING TONIGHT” rolled across the screen at the opening of Ms. Kelly’s show. This had to be a scoop. Ms. Kelly read her teleprompter in her best, breathless news-actress voice.

“He accuses Fox News of trying to make him scary and raises new questions about people of faith,” Ms. Kelly said, her expression stern, tinged with astonishment.

And that’s not all.

“The President also put forth a question whose main assumption was that people of faith are often the most suspicious!” she said.

If you looked closely at the screen, when they played Mr. Obama’s words, you could read in small letters “des Moines, IA, September 14” and the credit that the President was talking with Marilynne Robinson of The New York Review of Books.

The discussion, Fox’s “breaking now news,” was about a month old and nobody made any big deal of it back then.

Ms. Kelly said nothing of that. She had other proclamations but – fair and balanced to her journalistic soul – let Mr. Obama’s words seep through.

“Nobody expected me to win and so I wasn’t viewed through this prism of Fox News, conservative media, making me scary,” Mr. Obama said. “Folks who take religion the most seriously are also those who are suspicious of those not like them.”

‘Hmmmmm,” she said, in that tonal/facial expression combination that says so much more than words do.

Despite two guests – Bill Burton for the Democrats and Marc Thiessen for the Republicans – Ms. Kelly took much of the remaining time to mock the President until Mr. Thiessen picked up the tune.

“They get bitter, they cling to their guns and religion,” he said, dragging up an Obama quote about religious conservatives from several years ago that remains in heavy rotation on Fox.

“He thinks conservatives are bad people who don’t like people who look different than they do,” Mr. Thiessen said. “He’s basically accusing – calling them racists.”

Mr. Burton tried to say, “The President didn’t say anything about racism here. It was Marc who brought it up.” Enough out of Mr. Burton. Mr. Thiessen was on a roll.

“He believes that Republicans don’t care about people, that they’re selfish, bad people who don’t care about their fellow Americans,” Mr. Thiessen said. “If you’re out of work, you can’t find a job, you’re on your own.”

The President thinks you want dirty air and dirty . Don’t forget that.

He appeared to be expressing the thoughts of Democrats and liberals toward Republicans and conservatives, as Mr. Thiessen interprets them.

To finish the thought, Ms. Kelly quoted from the Sean Hannity Creed of “We’re the real victims here,” which perked up Ms. Kelly. The President, she said, “thinks you want dirty air and dirty , for good measure. Don’t forget that.”

Continuing to speak as if she read Mr. Obama’s mind, Ms. Kelly added, with sarcasm, as if she were Mr. Obama: “I am perfectly willing to talk to these air-hating, -hating, poor child-hating people.”

Mr. Burton suggested it was misleading to use “little snippets” of a long Presidential interview to make a distorted point. Ms. Kelly and Mr. Thiessen burst into laughter.

“The mainstream media have ramped up the criticism,” she said. “Finding controversy in what many feel are simple statements.”

Some of Dr. Carson’s simple statements have been about nuclear weapons and the “end of days” and fear of gun confiscation and how citizens could fight the U.S. government and how Jews should have defended themselves better in World War II and about how victims of mass shooters should charge head-first into automatic weapons spraying bullets.

“A number of media outlets treated the Doctor like some kind of crazy street-corner preacher,” Ms. Kelly said. “We’re all going to die.”

“We’re all gonna die!” he said, attempting humor. “The end is nigh. The rapture is upon us. It is one in an ongoing series of stories that Ben Carson is a kook. Ben Carson is a nut.”

Soon, Ms. Kelly was twirling her finger at her temple in the universal “He’s crazy” signal. Mr. Stirewalt said media people don’t understand evangelical Christians, “So you just point and go ‘Look at those weirdo kooks and Ben Carson’s one of them.’”

Mr. Kurtz added, “What the media fail to grasp is that the more they whack Carson or paint him as a strange figure, the more it helps him,” Kurtz said.

His final words were more nuanced.

Early in the campaign, Mr. Kurtz said, he told Dr. Carson he’d said some dumb things about Obamacare being worse than slavery. Dr. Carson started to tone it down, until last week, when he resumed shooting off his mouth like an AK-47 in a classroom.

“Now, he seems to have thrown caution to the winds,” Mr. Kurtz said. “He’s embracing who he is.” 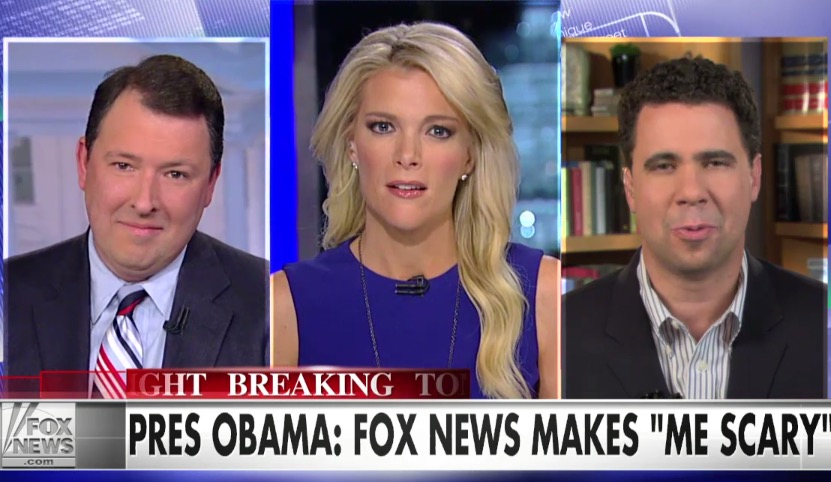