French artist Prune Nourry‘s 108 sculptures, the Terracotta Daughters, have traveled the world for two years, and are finally coming home to China.

The Daughters have been on a world tour, shown in exhibitions in Shanghai, Paris, Zurich, New York, and Mexico City. Now, they return to China where they will be buried this week, accompanied by a special performance called Earth ceremony.

The sculptures were made in 2013 with the help of master craftsmen from Xi’an, China, and are modeled after the world-famous Terracotta Warrior Army that was found in the Shaanxi capital in 1974. But unlike that army of 8,000 men that dates to the third century B.C., Ms. Nourry’s army is all female.

The work, as she told us last September during an exhibition of the Daughters at New York’s China Institute, relates to “human definition or human selection.” The female army is a commentary on China’s one-child policy, which gives preference to male children, and the figures’ distinctive features are modeled after eight orphan girls the artist photographed for the project.

Ms. Nourry plans to bury the Daughters in what she is calling “a contemporary archaeological site,” and unearth them in 15 years time. By 2030, China’s crazy gender imbalance is predicted to be at its peak.

In a recent post on Instagram, Ms. Nourry shared the first image of the Daughters, lined up in rows in two large, brick pits, ready for burial.

After one year of research to find a land in Mainland China (a land to be lend for the army not to be sold 😉 here it is! The army is about to be buried as a contemporary archeological site until 2030 🙂 #China #contemporaryarcheology #terracottadaughters 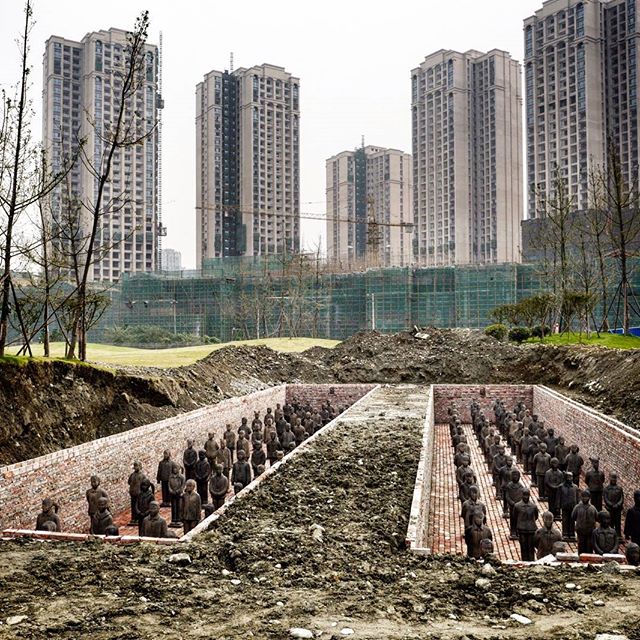