So what’s an aging queen like PS1 to do?

Fifteen years ago, MoMA/PS1 launched “Greater New York,” a recurring and influential Contemporary art exhibition with the express purpose of marking who mattered in the city’s emerging art scene and plucking those young future art stars from obscurity. But, in the years since, many cultural institutions and entities have entered the survey show fray.

The New Museum (perhaps more appropriately named for the task) has wrestled the “young talent survey” mantle away with its Triennial. Art fairs—fueled by the promise of cash rewards for collectors who buy early—have been tough competition for the emerging market, too.

On top of that, second cities like Los Angeles and Chicago are now not only sustainable but desirable locations for artists who crave space and time to make their work. This has only bolstered exhibitions in these cities, such as Los Angeles’ Hammer Museum survey “Made in LA,” an immediate hit with all strata of the art scene that continues to enjoy city-wide  support.

It was against that cultural backdrop that PS1, earlier this month, opened its fourth iteration of the “Greater New York” show, which seems to have moved away from its initial goals in favor of a ramshackle “Welcome to New York”-style extravaganza. It took four lead curators—Peter Eleey, Mia Locks, Thomas J. Lax and original October editor Douglas Crimp—and seven advisors to organize a cerebral patchwork of styles and eras, proving that the museum would rather risk spoiling the soup with too many cooks  than leave any stone unturned.

This crew, with a sense of pride, forged ahead with a strong desire to identify its native New York-iness. Armed with a wistful nostalgia and MoMA’s cultural muscle, PS1 decided to pull out work from some past greats (and also some little-known greats) for this edition.

David Hammons’ Untitled (African American Flag) (1991/2015), a cutting statement on black identity, which debuted at the Studio Museum in Harlem in the last millennium, is currently flying above PS1’s courtyard—a fair enough warning that the past is afoot.

To be fair, New York has seen some fascinating heydays; from the invention of Soho as the arts district where everybody knew your name, to the forerunning proliferation of queer arts that began in the ’70s, to the  “Pictures Generation” that came out of the city’s unprecedented advertising and media advances.

In recent years, New Yorkers have chosen to don the laurels of our own artistic past by embracing new renditions of some of the hometown greatest hits: Minimalism, process-based or Color Field abstraction. These revivals in turn have given way to Post-Conceptual and media-based art, more often than not inspired by that Cindy Sherman/Richard Prince Pictures Generation.

Unfortunately, the present rarely lives up to such a lovingly curated and archived past, and the 2015 edition of “GNY” tries too often and self-consciously to link newly-emerged young artists to minted stars and styles. Occasionally the curatorial team finds some nice moments, but far too often analogous works negate each other and obvious connections fail to illuminate.

For instance, a long, sterile hallway of smudgy vestments and faux advertisements by Annabeth Marks and Eckhaus Latta only serves to detract from Susan Cianciolo’s earnestly bizarre—but similarly staged—fashions, mannequins, ephemera and films. The hallway is clearly inferior in its inventiveness and originality, but even if you insist upon its presence, why also include Cianciolo’s clothing? The artist’s obsessively lovely projections and video works could have been representation enough.

In regard to painting, there is a sizeable talent gulf between many of the show’s senior painters and their younger practitioners (although it should be noted that painting, more than any other medium, owes its excellence to repeated study). The recently reinvented Peter Saul, the vastly underrated Robert Bordo and John Finneran offer graceful and magical feats for anyone interested in the dance of color.

But obvious decisions, such as placing Tony Matelli’s realistic, life-size, yet upside-down, pair of figures so close to Elizabeth Jaeger’s own pair of life-size—yet  cartoony—figures just a few yards away, are too frequently a recipe for a shallow morass of artistic judgments.

Other choices that don’t serve artists well include  blackening a room mostly containing paintings (paintings are made, as well as seen, with light) and mounting full photography exhibitions, proving that too much of a good thing can be a very real issue. The Henry Flynt room of photographs, depicting graffiti from the 1980s by SAMO© (Jean-Michel Basquiat), was particularly redundant, prompting me to tell a friend, “I never thought I’d get bored by anything Basquiat-related.”

What the show probably does best is access surprising works by Pictures Generation artists. Donald Moffett shined figuratively and literally with his Gold/Tunnel, which was possibly the perfect synopsis of where this show wanted to go.  Standing in front of his video projection of Central Park over shimmering gold canvas, you began to feel as if a door was being opened to a uniquely “New York” type of art.

Louise Lawler presents a tough but provocative room containing enormous photographs that were stretched practically beyond comprehension. Shown alongside a series of related Formica objects, she proves yet again that even though she’s no cuddly feel-good artist, she is someone who reliably veers off course without a map, letting her inspiration be her guide.

Overall, despite a stiff and sometimes jarring presentation, this GNY offers up a range of both fine discoveries (Kevin Beasley, Sara Cwynar, Mira Dancy, Hayley Silverman) and rediscoveries (Ms. Cianciolo, Mr. Bordo), and most importantly, ushers in the thematic change—from an emerging art survey to a regional investigation—that needed to happen.

Unfortunately, after hours of investigating the old school rooms and halls, the show starts to feel a bit like the over-the-hill music magazine Rolling Stone: A parade of long-winded, overly sentimental features on celebrated or forgotten classics with allowances made for young artists who snuggle safely between the well-worn groves of their predecessors. 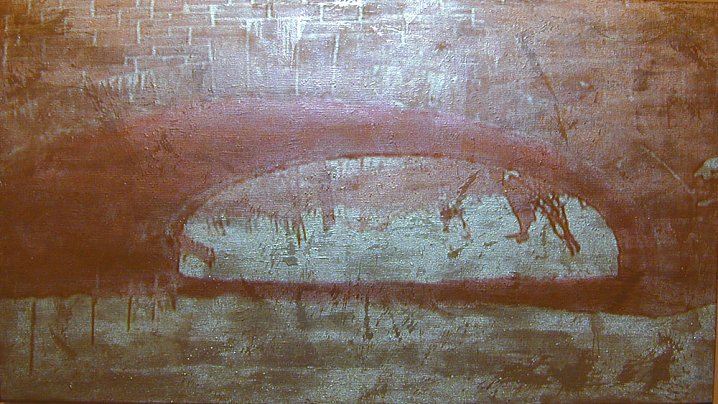