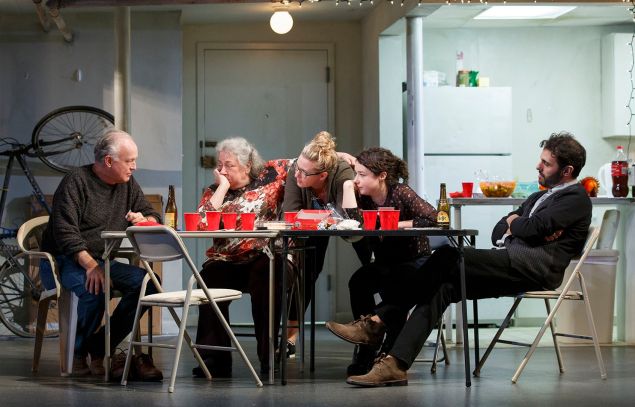 In addition to reviving old works for new audiences, the Roundabout demonstrates a growing interest in staging worthy experimental plays by emerging writers at the Laura Pels Theatre, the newest of which is The Humans, a well-acted, beautifully written family drama by Stephen Karam about the most durable of all theatrical staples, the dysfunctional American family.

Reed Birney, one of New York theater’s most iconic, accomplished and subtly magnetic artists, plays the patriarch of the Blake family from Pennsylvania. When the play begins, he stands alone in a duplex apartment in lower Manhattan’s Chinatown—listening, waiting, a lone participant in a paralyzing dream that is about to begin, end or never happen at all. This long, inert prelude to the 90 minutes without intermission that follow is deceptively simple. It promises deeper, darker things to come. Like everything else in the play, it has a significance that doesn’t immediately register. But wait. Everything in The Humans has meaning.

Suddenly, the other noisy members of the Blake family, who have driven all the way from Scranton, arrive for Thanksgiving at the apartment of youngest daughter Brigid (Sarah Steele) and her roommate-boyfriend-fiancé Rich (Arian Moayed), who is putting the finishing touches on the Turkey Day feast he has cooked from scratch in the downstairs kitchen. Presents are exchanged, along with witticisms and sarcastic hints of hidden animosity.

On the surface, they seem like a perfectly normal American family. Brigid, who tries vainly to be a perfect hostess, is a musician. Rich is a fastidious, organized academic still living in the philosophical luxury of a faded flower child. Older sister Aimee (Cassie Beck) has a good job as a lawyer. Father Erik and mother Deirdre (the sensitive Mr. Birney and the raucous Jayne Houdyshell) seem like sturdy, dependable parents with broad shoulders any child can lean on. They are accompanied by the grandmother, a senile old curmudgeon in a wheelchair who eats nothing, rarely utters a word and requires constant help to use the upstairs bathroom, which can only be accessed by an elevator. These could be your own relatives, counting the things they can give thanks for on Thanksgiving Day. But as the party lengthens into sunset, the windows darken and so does the mood. Director Joe Mantello orchestrates the shifts in tone with a brilliant dexterity.

Slowly, each character reveals the unpleasant truths gnawing at his or her insides in the guise of peace. Brigid is too strapped for money to pursue her own career, so she’s forced to earn a living as a bartender, resentful that her father has never offered to help her out financially. Rich, recovering from years of mental illness, posts notes on the fridge like “Ways to Have Fun” to make up for being too poor to marry Brigid. Aimee has given up her job because she suffers from severe colitis, exacerbated by deep mourning over the loss of her lesbian lover. Dad has lost his teaching job after 22 years and faces bankruptcy. Mom wastes no opportunity to remind him why their marriage is a pretense by crushing him with dry and jaundiced one-liners. The Blakes turn out to be like everyone else—victimized by the failing economy, pessimistic about the future and desperate to hang on in case things get better, but knowing they will only get worse.

This is where you begin to suspect the writer has something else going on besides a careful, character-driven study of the American family going down the drain. Mr. Blake keeps talking about a recurring dream that takes place in a dark tunnel. There is no escape and the dream never ends. The lights tremble into a blackout. Banging noises come from the floor above that sound like a poltergeist. There is no end, just a fade to black, like a movie for which there was not enough of a budget to film a finale. What is going on? Will dessert ever be served? Why is the play called The Humans?

It has a lot to say about children’s inability to grasp their parents as people and vice versa, but are the Blakes a real family, or ghostly apparitions from Mr. Blake’s dream? As the lights go out, he’s alone again onstage and the eerie set becomes the tunnel from which he cannot escape.  It’s the kind of play that invites multiple interpretations, like the works of Beckett and Ibsen, but it’s been written, acted and directed in a style of such supreme realism that it seems too naturalistic to be a metaphor for the human condition.

Whatever it is, The Humans is a unique and thrilling time well spent in the theater.  My only caveat is that without exception, the actors sink into almost indecipherable enunciation, including Jayne Houdysell, whose raspy shout can usually be heard across the street from any theater she happens to be appearing. Reed Birney is always a treasure, but even he has a late speech delivered in a whisper. Never mind. The Humans is a work of such originality that forgiveness of any transgression is preordained.

You don’t have to wrinkle your brain long enough to think about anything at all when you see Dames at Sea. A cornucopia of corn that pops right off the stage, it has nothing on its tiny mind but tapping your troubles away—and it succeeds with enough entertainment value to march you up the aisle in shoes with wings on. Yes, it’s another revival, but with this much fun, who would dare grumble?

First a modest off-Broadway musical in 1968 with two pianos and Bernadette Peters (she went out there a nobody and came back a star!), then later a splashy television special starring Ann-Margret, Ann Miller (“Tops in taps!”) and Anne Meara, this sappy spoof of vintage 1930s Busby Berkeley musicals at Warner Brothers now drops anchor for the first time on Broadway, fully orchestrated with tap shoes in tow, at the Helen Hayes Theatre, where I predict it will be docked for some time to come.

This is the one about Ruby (don’t ask “Ruby who?”), fresh off the bus from Utah who heads for a Broadway theater on the day a new musical is set to open. Ruby gets a part in the show on the spot, makes a new best friend of a chorus girl named Joan and falls for a handsome sailor from her own hometown named Dick (think Blondell and Powell), only to discover the theater is being torn down. (On opening night?) But wait! Calamity is avoided when Dick saves the show by moving it to his battleship in the New York harbor! This sends Mona Kent, the temperamental, flamboyant star into a fit and she walks out, arm in arm with the ship’s captain. Will the show go on? Will Ruby go out an ingénue and come back a star? Are you kidding, or did you just fail Late Show 101?

The six players exude the energy of a cast of thousands, singing and dancing to tunes like “Choo-Choo Honeymoon,” “Singapore Sue” and “The Echo Waltz” that still invite a smile after 47 years. Eloise Kropp is a delicious Ruby, and Cary Tedder has a beautiful voice and wistful, puppy-dog appeal as Dick. Mara Davi and Danny Gardner play their pals with admirable panache (Mr. Gardner does so much dancing that you might make the mistake of overlooking his voice, but he could be the next big crooner on the cabaret circuit). Veteran John Bolton excels in two roles, while Lesli Margherita, as the torrid Mona Kent, belts out “That Mister Man of Mine” with the kind of brass that can be heard next door at Sardi’s. Direction and choreography are both by Randy Skinner, who drags out the clichés like vanilla wafers to sweeten a plot so campy you laugh at yourself for laughing.

Musicals may be changing, and Dames at Sea is not Hamilton (thank God). But everything old is new again these days on Broadway, so even if it is another revival, it fits right in, and I promise you this: a good time is had by all. 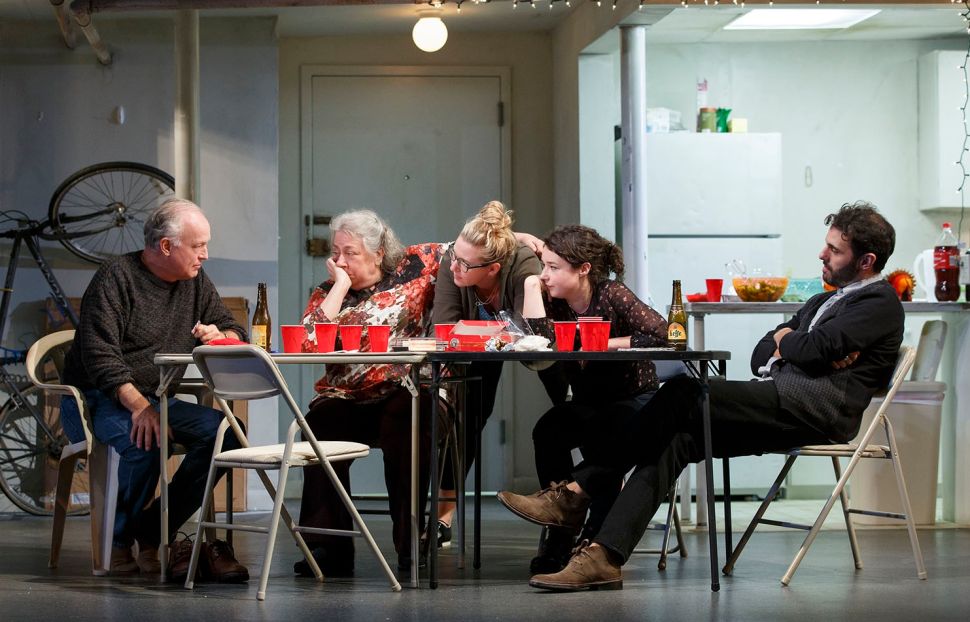