Too grim and heartbreaking for some viewers, Room is nevertheless an extraordinary film so powerful and unforgettable that it must be seen. Adapted from Irish-Canadian novelist Emma Donoghue’s 2010 bestseller, this is a devastating study of incarceration, survival, escape and rehabilitation as harrowing as today’s headlines and as suspenseful as the most knuckle-gnawing thriller I’ve ever seen. When it was unveiled at last month’s Toronto International Film Festival, the standing ovation lasted almost 10 minutes.

Brie Larson, a stunning actress previously unknown to me, gives a tremendous performance as a girl abducted by a psychotic as a teenager, imprisoned in a locked one-room shed in the maniac’s backyard for seven years and forced to give birth to a son she calls Jack, who becomes her responsibility, her only companion and her best friend. At the tender age of 5, Jack has lived the life of a hostage, never seen daylight or owned a dog, played baseball with other kids or talked on a telephone. His only experience with a normal child’s happiness is stringing together broken eggshells as a Christmas ornament. But he has extra-sensory perception when it comes to listening: to the sound of birds outside the room’s only window, to the children’s cartoons on the faded TV, to the bedsprings when his mother is raped every night by the man known as Old Nick.

Jack is played by Jacob Tremblay, a kid actor so amazingly perceptive he’s like Spencer Tracy trapped in the body of a child. The first half of Room is about growing up in captivity—raggedy clothes hanging on a makeshift clothesline across the room, crude toys made from newspapers and wires, an occasional taste of candy. Then the day comes when Ma hatches a dangerous plan to use Jack’s small body, wrapped in a rug in the back of their captor’s truck, as a possible method of escape. Even in his first view of freedom outside the confining darkness and fetid air of the home known only as “Room,” the boy takes a moment to observe the world he’s never seen—a leaf, a dog, a lawn of green grass, a blue sky. It’s the horror stories you often read about but find too ghastly to believe for real, related through the eyes of a child.

The second half of the movie is about the process of recovery and rehabilitation—for Ma, a painful inability to cope that leads to a mental breakdown, for Jack, a culture shock of people, places, sounds, sensations and sights completely unknown. Everything is from another planet: pancakes, bright lights, making a friend, learning how to climb a stair or carry on a conversation. Peering through the bannister of his grandmother’s stairs at the TV reporters questioning Ma, what Jack sees is what the audience sees, as Dublin-born director Lenny Abrahamson contrasts the terror of prison with the suffering of first exposure to an outside world completely alien.

It is to his credit that given the claustrophobic circumstances and the depressing material, he manages to fill the screen with arresting visuals and careful details that keep the pace moving. The great Joan Allen and the always interesting William H. Macy are excellent as the grandparents, but nobody commands your attention or wins your heart like the gifted young Jacob Tremblay. He dominates the emotional dynamics of the film’s second half with an initial shyness and distrust that is informed by the wisdom and curiosity that make children so adaptable in times of trauma and stress. I don’t want to spoil anything, but the little boy’s final line in the film, when, on the road to recovery at last, he asks to see the 10-square-foot “Room” one last time, is emotionally overwhelming. The material is dark, but the two co-stars find the light that leaves you with a very encouraging feeling of a thing called hope. 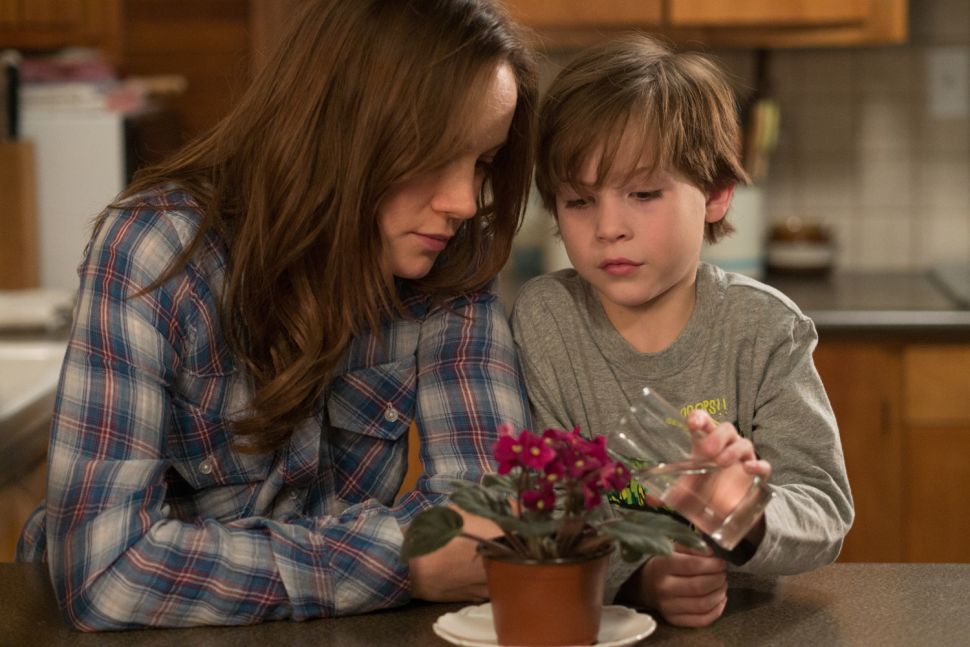