At a Tuesday night council meeting in Sayreville, the Borough Council passed a resolution against a Mayor Kennedy O’Brien’s new job with the State Department of Corrections. According to the council, O’Brien is underqualified for his new position and the job is a “glaring example of the unfair burdens put onto taxpayers.”

According to Council President Dave McGill who is opposing O’Brien in November, the job—which bump’s O’Brien’s salary up to $110,000 and would increase his annual pension after retirement from $2,000 annually to $40,000 annually—is “completely unfair.”

“Mayor O’Brien’s new job means a massive pension windfall that will set him up for life and the taxpayers will be forced to pick up the tab,” said McGill in a statement. “It’s completely unfair to the taxpayers and is yet another huge pension ripoff perpetrated by Governor Chris Christie and Mayor O’Brien. Tonight the Borough Council is voicing its strong opposition to this and all other cases of blatant pension padding by public officials.”

The job has drawn criticism and some have alluded that O’Brien only received the position because of his relationship with Governor Christie. O’Brien would only need to be in his job for four years to qualify for the increased pension. 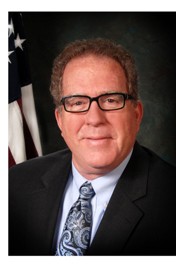