This week near Gettysburger, Quinn tries and fails to give the signature OPA Gladiator Speech with gravitas, the media tries to destroy Olivia, and Cyrus’ thirst for revenge gets him ousted from the White House.

Remember last week when I practically got on my hands and knees and begged Scandal to finally demonstrate some character growth and allow Olivia and Fitz to make a change, once for all? Well, I got my way (as I always do), because in “Dog-Whistle Politics,” three big changes occur that will change Scandal forever.

Following Abby’s decision to frame Olivia as a power-seeking whore in the press, the media is having a field day with trying to uncover the woman behind the swoop bang, Olivia Pope. The episode is framed by a 20/20 type investigation into her history; who she slept with before Fitz, what she wanted to be when she grew up, and even the soap opera that is her relationship with her parents. The host of the special notes that her father Eli grew up an orphan, and his dream was to raise a black girl that felt fully entitled. What a feat that would have been, had he succeeded. Though Scandal has its many shark-leaping moments, it exceeds when the stories and emotions are rooted in reality. When it comes to Olivia Pope, her feelings of isolation and inadequacy due largely to the fact that she is black and she is a woman ring true to black girls all around the world. Because of that, when the wannabe Diane Sawyer shares Eli’s hope for Olivia, it is impossible to not sympathize with the mess that Olivia has become. Here she is, exposed to the world as the mistress of the most powerful man on the planet, and humiliated due to a relationship that she entered partially because she never really believed it would come to fruition. Olivia’s a mess and instead of trying to find some haphazard way out of it, Scandal leans all the way in to all that discomfort. That’s the first change that comes this week, and it’s palatable.

The second notable shift in the Scandal-verse is Mellie’s motivation. Mellie has always lusted for more power behind White House doors but in public, she has unabashedly supported Fitz and sacrificed herself in doing so time and time again. This time around, Mellie is in a position of power, both as a new senator and the faultless scorned wife of an adulterer. She has the opportunity to go easy on Fitz and when the women of the Senate approach her about impeachment, she almost gives in to the impulse to resist holding him accountable. For a moment, she is bullied by Cyrus, who remains hell-bent on punishing Fitz for refusing to take him back as Chief of Staff. Fortunately for her, Cyrus’ insane monologue about how she is somehow fortunate that her son is dead and Fitz’ blatant disregard for her feelings give her the push that she needs. By episode’s end, Mellie is no longer is indebted to Fitz in the least and in fact, allows her rage and her mistreatment to motivate her to finally wield her power in her own favor.

The third and final shift occurs at OPA, where the gladiators are hard at work trying to preserve both Olivia’s business and her good name. Quinn makes an attempt to hire Marcus, the brilliant but temperamental activist from the last season, but he is less than charmed by her delivery (the first and only time I have missed Harrison). Though he initially turns down her offer, he comes back eventually, because Cornelius Smith Jr. (the actor who plays him) was upgraded to series regular over the summer, and because Marcus needs the money. The introduction of Marcus as a main character is a game changer because unlike all the other Gladiators, he is not some damaged zombie who views Olivia Pope as his personal Lord and Savior. He feels beholden to her, sure, because she tried to fix his prior situation when no one else could. However, he has a voice, and a mind of his own, and he refuses to blindly follow orders just because Olivia was the one to command them. He also shares Olivia’s unapologetic blackness, to which Quinn and Huck can neither reconcile nor relate.

Due to all of these factors, when he encounters the reporters and hears the words they are calculatedly choosing to describe Olivia (“articulate,” “bossy,” “urban”, etc), he cannot simply follow Olivia’s orders and ignore them. He understands why it is impossible to be both black and entitled in a world that consistently reduces you to your skin color, ability to speak in full sentences, and sex appeal. He responds, calls out the inherit racism in the way her story has been covered, and encourages OPA to flip the story in the media. This is the first time in recent memory that a member of OPA has openly disobeyed Olivia to benefit Olivia herself. Ever since Harrison died, the Gladiators have been stuck in a rut. They either swear off Olivia “forever” for leaving them (Abby) or they continue to praise her for saving them (Huck and Quinn). Whether they like it or not, Marcus is just the change OPA needed.

In the end, Fitz changes a bit too, disregarding everything standing in his way (the threat of impeachment, his status as still technically married), and chooses to claim Olivia in public for the first time ever. They ride off on a date at the end of the episode, and for the first time in a long time, Olivia and Fitz look happy. See, Scandal! A little change can be good for you.

To close, I leave you with a few pressing questions:

– Does anyone else find that Elise and Jake’s love story sort of puts a damper on Jakes unrequited love for Liv?

– Does you think that Susan Ross might actually make a pretty okay president?

– When is the last time we saw Teddy and ohmyGod, whats going to happen to him in all this mess?!

– Who else whooped when Olivia finally admitted that she straight up has a very bad case of PTSD?

– How many times can Abby keep her job by default? 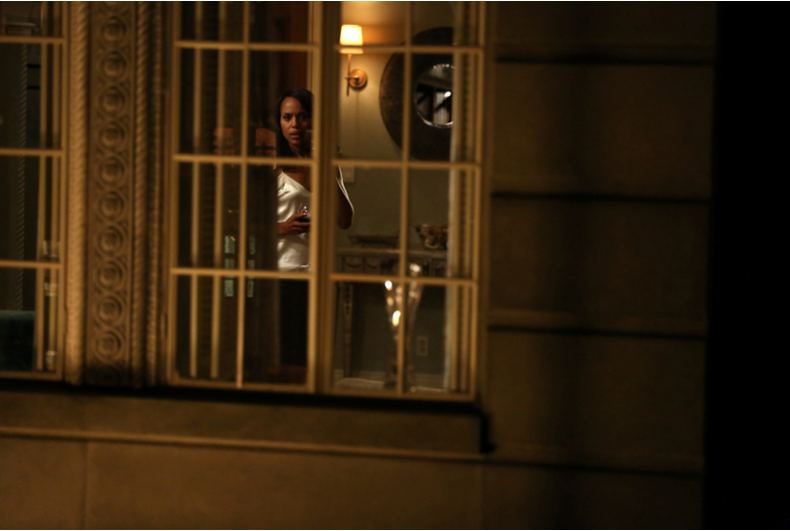