This week on Cyrus’ retribution couch, a Fitz impeachment becomes a very real threat, Olivia reveals she probably would not have watched season one of Scandal, and Leo legitimately tries his best.

Following Fitz’ decision to finally own up to his relationship with Olivia, “You Got Served” continues Scandal’s strong thematic streak and is all about choices. The Pope Dragging of 2015 is in full force and continues to get more and more personal, as the press and public try to piece together the story behind the affair. Olivia is finally ready to acknowledge that she is way over her head and chooses to hire Leo as a lawyer/fixer of her own. He spends hours shuffling through the disorganized stacks of publications with Olivia’s face on them spread all over OPA. He pitches several tactics to shift the focus of the story in the media, most of which are immediately shut down by Olivia herself. His idea to frame Fitz and Liv as classic star-crossed lovers is the most prominent pitch, easily garnering sympathy from the public and potentially retaining OPA for her. Olivia has a visceral reaction, barking that she not only cannot pull off “lovesick” in an interview, but also that she would not have bought the story as an outsider looking in. Odd, sense the whole “Fitz-and-Liv-looking-lovingly-into-each-others-eyes-and-yearning-for-hours-on-end” thing is literally the premise of season one and the reason why all those Olitz shippers are still tuning in. Still, he has one more idea up his sleeve, which is to frame Olivia as a woman of the people. A career woman, who is driven, admired, who has friends and a life and groceries in her fridge, but is still an average, relatable girl at heart. They all agree and get started on crafting this utterly false depiction of Olivia The Person and not The Mistress. Since none of the members of OPA can speak or use their legal names in public, Olivia is on the hunt to fabricate friends (très triste). She heads directly to Edison’s place, and it dawns on me how difficult a time this actor must be having booking gigs right now. He looks exactly like Bill Cosby, and I mean exactly. (Google him, his name’s Norm Lewis.) Anyway, not-Bill agrees to act as a character witness of sorts in the media and put a good word in on her behalf, if she admits to being “a criminal, a whore, an idiot and a liar” in a spectacular callback to the season two episode of the same name. He does it, and that is barely helping before the media notices Olivia’s prized ring from Fitz and speculates its importance. “Is the President of the United States both engaged and married at the same time?” one anchor asks, all concerned, and it is by far the most hood shit I have ever heard in my life. He’s not, of course, but he is very, very screwed, which is basically the same thing.

Over at the White House, Mellie is dead ass serious about this whole impeachment thing. Her sorority secret congressional committee is digging up all the dirt they can find on Fitz in hopes of finding “impeachable offenses, which apparently is an entirely subjective phrase and mandate. Fitz has his guard down until David Rosen comes over the Oval to warn him of the investigations as a favor to him. (“As Attorney General, I shouldn’t even be here right now,” Rosen says, just like he always says, but like, dude, don’t be here then.) Fitz is adamant that he wants to do whatever he can to avoid impeachment, but each time he says, I believe him a little less. Why would Fitz even care if he were being impeached? He’s been the messiest U.S. President since literally Nixon, he rarely expresses real concern for leaving a legacy, and he is not even marginally competent at his job. Still, he chooses to suit up just in case his children may not be in the mood for a lifetime of humiliation, and pursues Cyrus. Cy has the golden ticket; since rumor has it Mellie’s committee has a video of Fitz that proves he went to war with West Angola mostly to save Olivia. If Fitz can get Cyrus to come back to the White House as Chief of Staff and vouch for him, Fitz would actually have a fighting chance. Cyrus is obviously in (he’s been living in his miserable CSPAN den for months and Matthew Del Negro is getting worried) but insists on being begged first. Cyrus knows everything about Fitz and Fitz “couldn’t even tell him his mother’s name”, Cyrus says, all but pouting. He doesn’t feel appreciated. Fitz of course remembers Helen’s name and lots of other things about Cyrus, and despite all of his revenge plots and his bullshit, Fitz chooses to invite him back into the family. Cyrus accepts under the grounds that his office gets recarpeted and Elizabeth North gets fired. Fitz accepts all his demands and is crying while doing so for no reason at all.

Back at OPA, Leo is red in the face trying to deal with Olivia. She’s set to do her big confessional interview and since the “woman of the people” shtick is out the window (she did look out of place in a grocery store), Leo is once again pushing for her to go with the star-crossed lovers scheme. She refuses, looking physically ill at the thought of being depicted that way. At first, the interview is appears to be a complete train wreck until Olivia finds her angle. She admits that she regrets ever meeting Fitz, because of the destruction it has caused. Everyone from her close friends to her acquaintances are being harassed because of her relationship. She is being honest, but she also chooses to work the general public’s capacity for basic empathy. “If love was a choice,” she all but chokes out, “I would not have chosen to fall in love with that married man. I would not have chosen destruction.” How could you fault Liv when what she is saying is just so true? If love were a choice, why would Kate Gosselin have ever married Jon? Why would Selena keep going back to Justin? Why would so many people keep buying Chris Brown albums? There is no choice when it comes to love, simple as that. And so despite the dire circumstances, Olivia the Mistress becomes Olivia the Person, if only for the briefest of moments.

Finally, some parting thoughts as we gear up for the tensest wedding of all time next week: 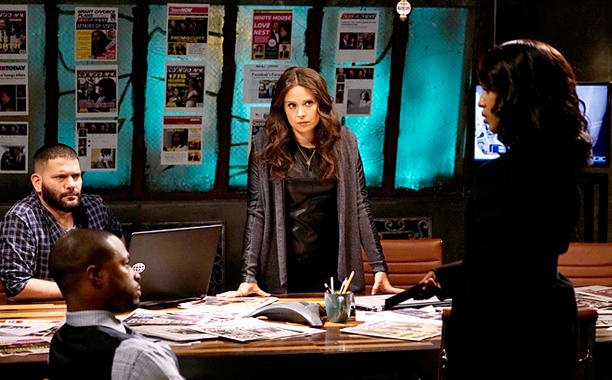