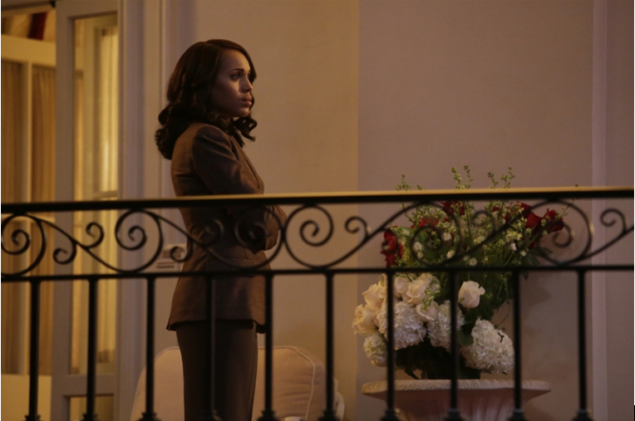 No woman should ever be proposed to while she’s dressed like Murphy Brown. (photo: ABC)

This week in that long empty hallway where Mellie goes to scream: Olivia and Fitz remain on totally different pages, Mellie reads Fitz for filth, and Papa Pope is basically The Joker but black.

We begin with Mellie on the stand, under oath, bold-faced lying about her knowledge of the affair before Olivia fessed up, much to Sally Langston’s delight. Her ex-Senate-rority has evidence that Mellie has been less than honest about her involvement in Fitz’ trysts in the form of a statement from one Jeannine Locke (Props to the oft-forgetful Scandal for even mentioning the Jeannine incident, which happened way back in Season Three).  If you recall, OPA and Cyrus’ team were able to pin the rumors that Fitz had a mistress on her and draw the general public’s attention away from Olivia. She was also given two million in hush money, and Mellie was in fact present to seal the deal. Jeannine brings all that ugly back up in order to incriminate Mellie and it works spectacularly. Once again, Mellie gets reprimanded for using her power to protect Fitz. The committee makes her read the letter aloud, guilt all over her face, as her career goes up in flames. Poor Mellie. Job in a skirt!

Over in the Oval, Fitz, Liv, and Cyrus watched the whole trainwreck happen while biting their collective nails. Now that the committee knows about the Jeannine cover up, it is a matter of time until they find out about all the other dirt Fitz has gotten himself into chasing after Olivia’s tender loving. Cyrus declares in the season’s hundredth poorly thought-out scheme, that in order to get out of this, Olivia and Fitz must get married. That way, Olivia cannot be forced to testify against Fitz and incriminate him further. Olivia retorts, making that same seasick face from last week, that this will never work. Cyrus insists that it must, reminding her that he “married a Whore” in the midst of a scandal a year ago and the public ate it up. Fitz says he’ll find another way, but since Fitz is the one saying it, that does not mean much. Olivia is on the verge of a panic attack.

At OPA, the gang is desperately trying to carve a way out of this odd forced marriage for Liv. Abby bursts in to a brainstorm session just before they decide to pin the Jeannine scheme on Harrison. Dead Harrison, they repeat unconvincingly when they are called to the stand, is the one who came up with the plan to frame her and save Liv. Olivia is so overwhelmed with her strong anti-marriage feelings that she opens up to both Jake and Abby. While Abby lends a sympathetic ear, Jake hangs up on her once he hears the words “marriage” and “Fitz. Jake is just a person who has reached his limits, but most of the time, she is too selfish to respect that.

Post Jake dial tone, Olivia shows up at Fitz’ bedroom at the White House, only to be met by gallons of rose petals on the floor. She follows the trail of them outside and looks sick to her stomach. Fitz is on the balcony in a tuxedo, asking for a do-over. Before, their proposal was a panicked proposition from a balding sociopath. This one will be from him. Olivia begs him to get up and off of that knee. Aretha Franklin’s “Ain’t No Way” plays in the background, a heartbreaking melody about lovers that will never make it work. She’s about to vomit, and Fitz had no idea there was any issue. He complains that he felt foolish asking his valet to scatter Fantasia Barrino’s weight in rose petals around the room, but he thought it would make her happy. She is gagging. She does not want a fake fairytale. She does not want him trying to make their bleak conditions romantic. Most of all, most painfully, she does not want to get married to this man under these circumstances. He huffs about how she will never be ready to get married at leaves her there, but that’s not really the issue. Now that the element of secrecy has vanished from their relationship, they have to acknowledge the problems in their relationship that only involve the two of them. Fitz wants to marry her, and has always wanted to marry her, since the campaign trail. He wants her in the White House as his First Lady. Olivia has never wanted that, detests the idea, and gets sick at the thought of it. And that miscommunication is no one’s fault but their own.

As Olivia continues her ongoing Fitz-induced existential crisis, Rowan is making every effort to contact her. He is desperate to get out of jail and due to a laundry related mishap, the prison guards are out to kill him. He’s in the hospital and offers Olivia a “get out of jail free card”. He is Rowan after all and has dirt on every member of that senate judiciary committee. He can make the threat of impeachment evaporate if she agrees to get him out of prison. If you recall, she is the one who arranged his arrest in the first place and has been firmly anti-Rowan her entire life. Still, the card is a shiny, intriguing option and she can’t ignore it. If there is anything we know about Olivia thus far, it is that she loves to run from her problems when a clear solution is not in sight. At this very moment, there is a missing couch cushion in her apartment from the time she was kidnapped and spilled red wine all over it. Olivia Pope is the type of person to just live with two out of three cushions because that’s easier than getting a whole new couch. So yes, when Rowan speaks of a way out, she listens.

Since he’s in her head and she can’t get him out, she approaches Mellie to help with fulfilling her end of the bargain. Mellie is confused about why she would ever help with such a scheme. Things cannot get worse for husband-less, job-less, homeless Mellie, but Olivia says it can and it will if she testifies honestly. Mellie pushes Olivia for more information about the mystery prisoner and Olivia fesses up to everything, including the fact that Rowan is not only her father but also the murderer of Mellie’s son. Mellie is shaken and Olivia just leaves her there to tremble alone in that hallway. Later on, Fitz and Mellie are trying to be casual about settling their quickie divorce. Tension is thick after they bicker over the custody of their children, and Fitz makes an off the cuff comment about Mellie taking things from him. She goes off on him, and thank God, because he needed it so badly. She tells him he constantly convinces himself he is blameless when in reality her only downfall is that she believed in him. She storms out and gives him a chance to think about what he’s done.

On her would-be wedding day, Olivia Pope gets called to the stand of the impeachment hearing. She’s not there, but a White House staffer is, with manila folders filled with dirt on each member of the committee. Mellie came through and had Rowan released and in return, the threat of impeachment is over. Their quickie wedding is canceled, Abby returns Betsy Ross’ ring to Fitz, and now as payment, Olivia owes Mellie the presidency. In the end, Olivia gets her quick escape from her forced forever in exchange for a quick deal with the literal devil, Mellie just may get the White House, and Fitz got the reality check he so desperately needed.

– When Olivia hit Rowan with that dial tone, I felt it in my gut. The cold shoulder was real in that moment.

– I have to admit I found myself a bit jealous of Rowan’s prowess this episode. Ol’ dude knows how to fake arrhythmias. Have you mastered anything nearly as baller in 2015?

– I am certain that absolutely no one will miss Elise. How many dead people do you think there are sitting at train stations completely unnoticed (shudder)

– Jake deep in unrequited love for Liv gives me very strong Charlie Brown vibes. When, on when, will she give up and just settle for him?

– Susan and her wine coolers were everything. She needs the Presidency. Or at least a podcast. 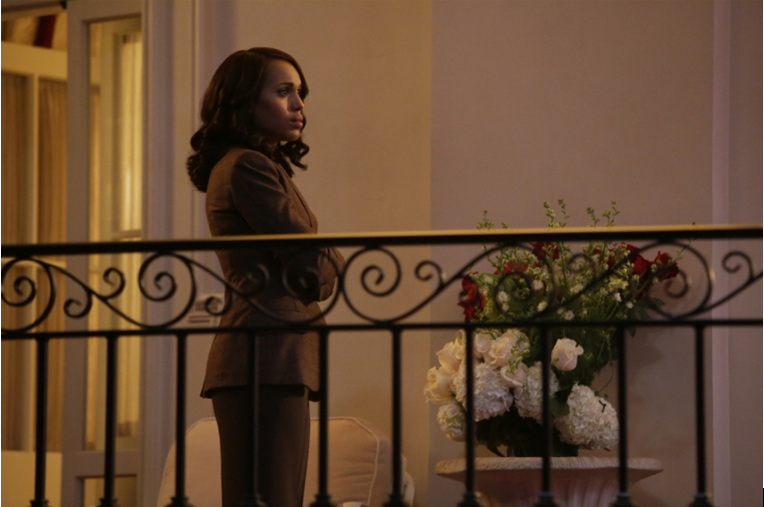