Sen. Charles Schumer tonight warned a gay, lesbian, bisexual and transgender gathering that the 15 candidates seeking the Republican nomination for the presidency were all “chomping at the bit” to appoint Supreme Court judges who would overturn decisions that declared statutes banning gay marriage were unconstitutional—and argued that gay rights supporters must rally around Democratic front-runner Hillary Clinton.

Addressing the group Empire State Pride Agenda’s annual dinner, Mr. Schumer argued that history would see this year’s Court decision as making America “a more perfect union.” But the leading Democrat alluded to the advanced age of much of the court, and the fragile 5-4 majorities which decided both 2013’s United States v. Windsor, which struck down the Defense of Marriage Act, and 2015’s Obergefell v. Hodges, which made gay marriage legal nationwide. He argued only Ms. Clinton, the former junior senator from New York, could be trusted to install justices who would uphold those rulings.

“This coming November, we will elect a president with the power to appoint the next two, if not three Supreme Court justices. The Republican candidates—you hear them! You hear them with their anti-LGBT, anti-transgender bigotry. They’re chomping at the bit, eager to appoint jurists that will unravel our hard-won victories. And that, my friends, is one of the many reasons we need to elect Hillary Rodham Clinton as the next president of the United States,” Mr. Schumer said to an uproar of applause.

“My friends, the fight for gay and transgender equality is not close to finished,” he said. “Not so long as a county clerk in Kentucky refuses to issue marriage licenses to gay couples.”

Ironically, both Mr. Schumer and Ms. Clinton were once opponents of gay marriage. The senior senator from New York voted in favor of the Defense of Marriage Act, which defined marriage as being between a man and a woman, while he was a congressman in 1996.

President Bill Clinton subsequently signed the act into law, which the Windsor decision struck down in 2013. Tonight, Mr. Schumer referred to it as “odious.”

Ms. Clinton, like President Barack Obama, vocally opposed gay marriage while in the Senate and while campaigning for president in 2008. Mr. Schumer flipped his position on the issue in 2009, four years before Ms. Clinton came out in favor of the right of same-sex couples to wed. 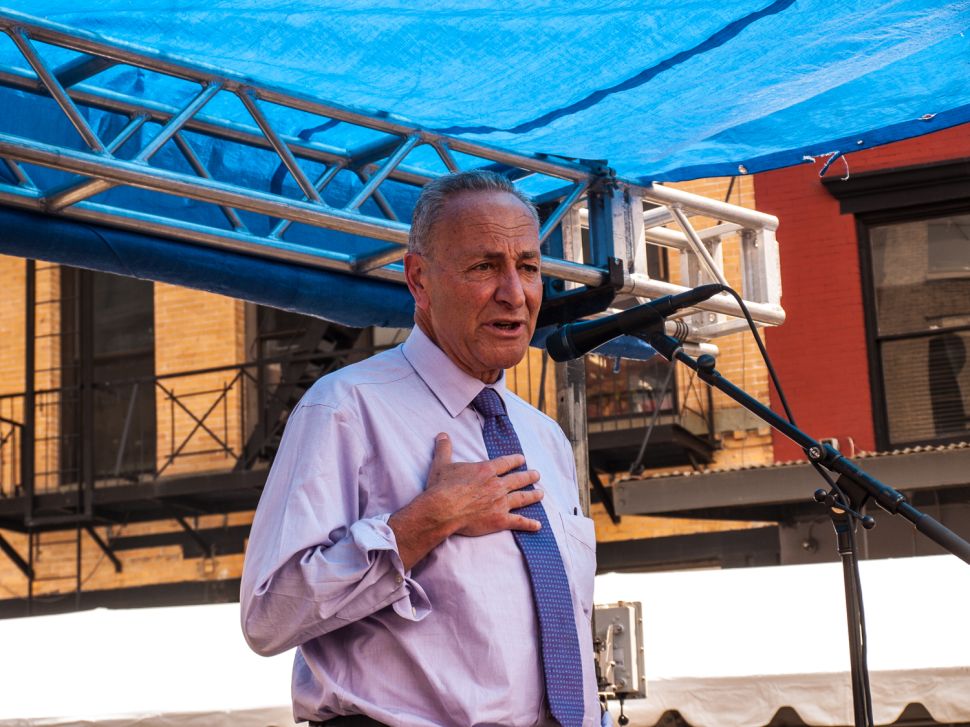