I had a severe case of second screen syndrome during this week’s Scream Queens. And by that I mean, I repeatedly refreshed my email. Not even the screams and sharp insults could tear me away from deleting every email I’ve ever received from Bed Bath & Beyond. Scream Queens, you bored me this week. I’m not proud, but I succumbed to my “Ryan Murphy Doesn’t Make Great Shows” mentality once more.

To be fair, the premise for this week’s episode was weak. It kicks off with Zayday and Chanel tying their number of votes for presidency—meaning the two will share the position. However, the episode is largely about Kappas being locked in the KKT house, while the Red Devil roams around, killing as many sisters and Dickie brothers as he can.

Before the Kappas realize they’re locked in, the girls decide to play an innocent game of Spin the Bottle. And by innocent, I mean that Chanel #3 manipulates the game to explore her feelings for Sam. Disgusted glances are exchanged, because in Scream Queen universe, Glee never happened and television remained super homophobic. Before long, however, the girls realize they are locked in, and quickly begin to panic.

Confined spaces are terrifying. Murderers are terrifying. So why is no one scared? Or reporting crimes? Three people die during this episode, and no one is phased. Not even a little bit. The first death occurs when Dickie brothers come to Kappa’s rescue, after a distressed Chanel calls Chad when she realizes she and her sisters are locked in. Chad climbs up a ladder to reach Chanel and let his brothers in. Unfortunately, Caulfield is left to climb up the ladder by himself. Yes, Caulfield, the brother with no arms. Unable to climb the ladder (due to his, you know, lack of arms), Caulfield is stabbed repeatedly by the Red Devil. It’s upsetting.

Once the Kappas and Dickies mourn Caulfield (the eulogy lasts for about four seconds, and there’s a lot of shrugging), the group gathers in the living room to play Truth or Dare (which, Zayday and Grace hope, will reveal who the killer is. Because if I learned anything from seventh grade sleepovers, it’s that thou shalt not lie during Truth or Dare. Thanks, Ryan Murphy!)

Sam reveals during the game that Chanel #3’s father is Charles Manson. Chanel #3, in her fury, dares Sam to go into the basement and take a nap in the bathtub where a Kappa previously died. As soon as Sam enters the basement, she is greeted by the Red Devil. She asks that the Red Devil reveal his identity before she kills him, and then exclaims, “I knew it was you!” And then she begs for her life. I don’t mean to be critical, but I absolutely mean to be critical. Why would Sam ask for her safety after she learns of the Red Devil’s identity? That’s just, so poorly thought out. I expected more from you, Sam. Your edgy tattoos suggested an intellect that is disappointingly absent. Naturally, she’s suffocated with a plastic bag.

The last murder victim is Roger (brother to Dodger, who died in the last episode). Roger and Chanel #5 play Seven Minutes in Heaven, and things really heat up when the Red Devil shows up. Things cool off considerably when Roger gets nail gunned to death. I hope someone tells his parents, because these kids have gotten concerningly lax about reporting crimes.

To cap off an episode of terrible, terrible ideas, Zayday and Chanel find a set of underground tunnels, and decide to explore. Chad sends off his girlfriend with a “you’re so rich and hot!” and off she goes, into the Tunnels of Death—which I named, slightly inaccurately, because no one actually dies in them! That we know of, anyway. But for tonight, Zayday is saved by Chanel after the Red Devil goes after her.

Scream Queens is suffering from an identity crisis. And by identity crisis, I mean that there is not a single likable character on the entire show. Not one. Emma Roberts is perpetually annoying, Grace is clueless, and Hester is so sexually explicit it makes me blush. And I watch this show alone. The show is funny, yes, but I’m not rooting for anyone. Or against anyone, really.

So, here’s to this week’s episode. Here’s to hopefully caring more about the show in the future. And, most importantly, here’s to finding out why Chanel #5 wears ear muffs (her stalker is obsessed with her ears and wants to cut them off! Who knew?) 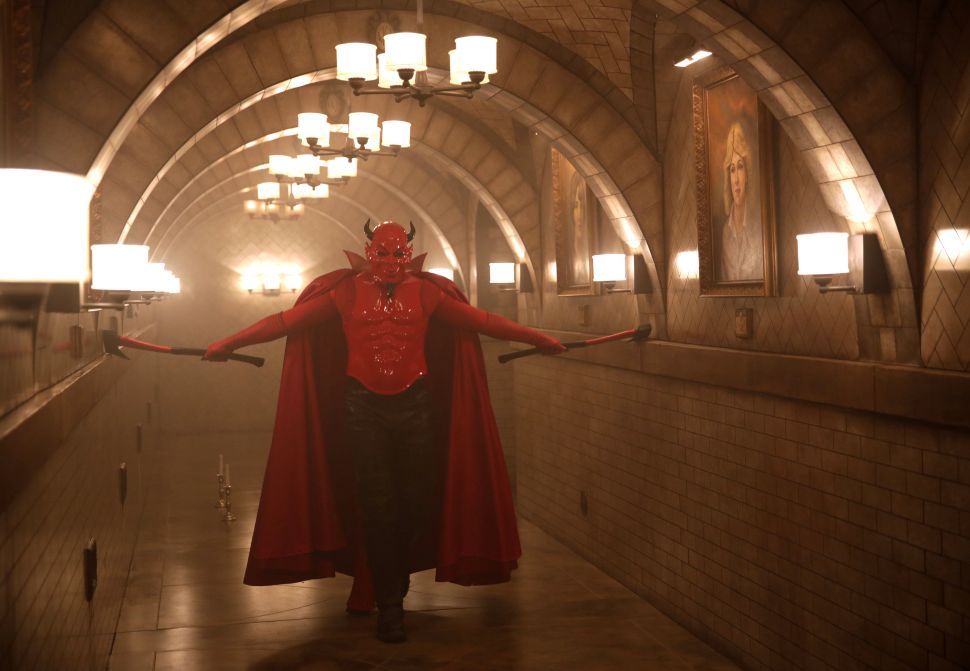