Between the horrible blasting music that sounds like an electric funeral dirge, the flashing strobe lights and a huge slab of ice as a backdrop, the revival of Harold Pinter’s worst play, Old Times, opens the Roundabout’s fiftieth anniversary season on Broadway with a head-scratching thud. I’ve seen this pretentious bore several times in both New York and London (usually because of the interesting actors it attracts) and I still don’t understand it. The latest incarnation at the American Airlines Theatre is only 65 minutes long without an intermission, which is too short to walk out of, but a few people did it anyway.

I don’t blame them. As much as I’ve admired some of Harold Pinter’s screenplays (especially The Servant and The Pumpkin Eater), I have never been a fan of his plays, where he had less time to develop characters and move the action along and over-indulged in what his critics always called “verbal diarrhea.” Never has this annoyance been more obvious than in Old Times. The three characters in this yawn are a husband and wife, Deeley (movie star Clive Owen, making his Broadway debut) and Kate (beautiful Kelly Reilly, whose almond eyes, high cheekbones and luxurious sensuality reminded me of the late Janice Rule). They’re urbane, sophisticated people who seem to have outstayed their welcome, outlived their usefulness to each other and outlasted their marriage bonds.

When the play opens, they can barely tolerate each other as they lounge around their country house on a cold autumn night discussing Kate’s oldest—and only—friend Anna, who is due shortly for a visit. The somber mood lifts slightly when Anna (Eve Best) arrives, bringing with her an air of gaiety as she reminisces about the good old days when the two women were roommates, but Kate goes into a withdrawn silence and Deeley grows more suspicious of her relationship with Anna, aware that they might have once been lovers. They all drink huge amounts of brandy and smoke furiously while the women strike ridiculous poses and emphasize words melodramatically. There’s a mild fascination watching the actors grapple with words that have no meaning, trying to get the tempo right. I once saw Rosemary Harris get the punishing palaver just right, and how I wish I could have seen the 1971 production in London.

Kate listens silently while Anna directs most of the absurdist dialogue toward Deeley: “You have a wonderful casserole—I mean, wife.” Kate finally rebels, attacking them both: “You talk about me as if I’m dead!” Maybe she is dead. Some critics have suggested they might all be dead and all the patter is posthumous. Pinter’s plays are all about people puncturing the facades built around them—either by themselves or by others. Old Times is full of his trademarks—interminable pauses that become tedious instead of provocative, witty asides that miss their mark, time-wasting bits that signify nothing more than an attempt to justify the price of tickets. At one point, to Kate’s understandable fury, Anna and Deeley sing atrociously off-key stanzas from songs by Cole Porter, Jerome Kern and other golden oldies. It’s like Pinter in a mood for self-parody.

The performances consist largely of arch grimaces, world-weary suffering and near-convulsive writhings—more a sign of soporific direction (by Douglas Hodge, another actor no less) than bad acting. Clive Owen’s Deeley is a peculiar mix of tragedy and comedy. When it dawns on him that Kate is no longer the fun-loving woman she was when she lived with Anna, nor the shy girl he fell in love with, but an emotionally jaded shadow of the person she used to be, it’s uncomfortable to watch, but mainly because we don’t know who to feel sorry for the most. Kelly Reilly has the most difficult role, because for most of the play she sits, listens, crosses her perfect legs and reacts, while the others try to top each other in their memories of her.

Old Times is a colossal pretense at mature and meaningful stage  “literature” that results in an overdose of nothingness, and although it is mercifully short, I was relieved when the curtain eventually came down. 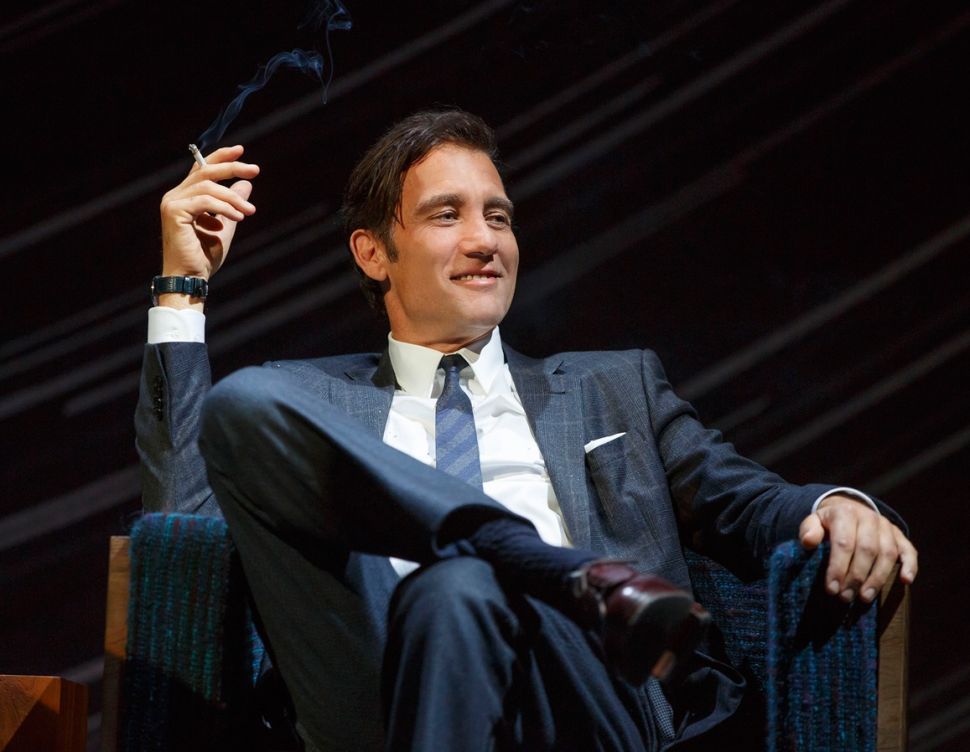