Sleepy Hollow has always suffered a little bit from a “Now what?” problem. Over the past two seasons, the hour-long horror-comedy on Fox has remained a faithful descendant of the Whedon-y world of Buffy, even while maintaining its own voice and historically nerdy bent. (I like to imagine that Sleepy Hollow and Buffy, anthropomorphized as teenagers, would sit next to each other in their AP classes and pass funny notes.) And just like Buffy killed the Master after season 1 and returned, bloody but unbeaten, back to prom, Sleepy Hollow‘s finale seemed to have neatly sewn up all the loose threads dangling from the Headless Horseman mythology. Moloch, the apocalyptic harbinger, was destroyed. Henry Parish, Ichabod’s secret son  that was older than his dad and played by that guy from Fringe, was likewise dispatched, as was Ichabod’s Melissandre of a wife, Katrina. Without his son or soulmate to work towards, there wasn’t much for Ichabod to stick around town for, especially since his and Abbie’s adorable BFF team-up was part of a now-completed prophesy of bearing witness.

So…now what? Or, perhaps more accurately: how what? How is Sleepy Hollow going to keep us engaged with a story that’s already been laid to rest?

Because we can always just throw more creepy pasta monsters at the wall and see what sticks, as the third’s season premiere “I, Witness,” proved by having a witchy Pandora (Shannyn Sossamon) enter and dispatch in the cold open what was left of the horseman of Death with her –what else?–box. (Which I guess at that point was still Abraham, headless, and his red-eyed horse galloping through the woods but like in a non-threatening way?) It’s not hard to create a new danger to act as a beacon to get the gang back together. We’ve skipped nine months into the future and Abbie, who just breezed through Quantico (no, not THAT Quanitco), has been dispatched by the FBI to her hometown to bring down the multinational crime syndicate that’s running out of upstate New York. She gets a call from Immigrations, which has picked up Ichabod for trying to smuggle some contraband into the country. Abbie is able to lift him pretty quick from the I.C.E. detention, center; a little get-of-jail-free card she calls a “perk” of the job, but considering that Ichabod’s only form of identification is a fake ID made by grifter/small-time arms dealer Nick Hawley, might be selling herself short. (How did Ichabod even get OUT of the country? He doesn’t have a passport, or even a social security number.) Ichabod’s now following in Hawley’s path, apparently, illegally transporting old-timey artifacts: a stone with a Sumerian prophecy that he picked up from his ancestral burial ground, and conveniently has ANOTHER tablet hidden underneath its facade that has a picture of Abbie and Ichabod with the word “Destroyers” on it.  Hey, it’s better than Witnesses.

In case we’re counting, that’s THREE people on the show whose official job is “artifact smuggling,” a small matter that at some point will conflict with Abbie’s career goals. Though Hawley is currently off…I forget where, but it’s as vital to his character as it is superfluous to the show’s narrative, meaning that he’ll just show up again whenever the plot calls for him. Abbie’s sister Jenny, of some indeterminate age that she spent most of her life both in a mental asylum, foster care AND as globe-trotting Laura Croft type, has at least tried to make a normal go of it, spending a week as a paralegal before she’s called back to teach everyone the origins of gunpowder. (Sure.)  Everyone on this show is Indiana Jones with their artifact lifting and innuendo-laced flirtations with other grifters. Does no one on this show worry about bedbugs?? Also, these off-the-books gigs may run afoul of Abbie’s current career goals at some point, just saying. Despite Abby’s clear inside track at the FBI, her partner is a typical “You haven’t impressed me yet!” cliche, and is luckily dispatched by the third act by a fear-based monster of Pandora’s box that is also, luckily, susceptible to bullets. But only when its eyes get clouded over, which is APPARENTLY where we got the phrase “Don’t shoot till you see the white in their eyes!” Oh, this show and its alternative history lessons. Betsy Ross (Nikki Reed) is a super ninja spy, and apparently no longer a vampire from Twilight! Sure! I don’t see why we still need these romantic entanglements in Ichabod’s flashbacks, because they mess with the Katrina timeline and show Sleepy Hollow‘s narrative cracks in starker relief than necessary. But at least it did bring us to COLONIAL TIMES. Not like, the time period. The restaurant, where a Josh Gad-wannabe gets chewed out for wearing his triangle hat the wrong way (“Point goes in FRONT, you are not a pirate,” Ichabod fumes) and speaking like someone with brain damage.

As someone who spent most of her childhood begging her parents to take her back to Colonial Williamsburg because she liked cosplaying in scratchy wool, this felt like the payoff Sleepy Hollow has been teasing out for far too long. (Remember when Ichabod was spending time with those historical reenactors?)

Sleepy Hollow lives and dies by its cleverness and winking historical humor on one hand, and the rare emotional bond of its heroes (how many shows like these star a male/female BEST FRIEND team who never even consider hooking up?): keep those two elements alive, and I’ll pledge allegiance to this show anytime. 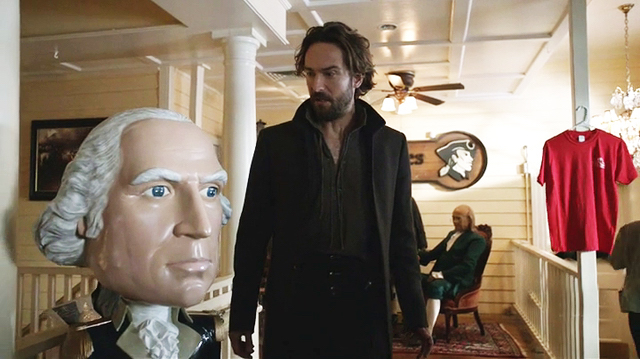