Stop staring at that novel you’ll never finish, pop in a pot lozenge, and settle in with someone who is most definitely not your spouse because the second best thing on TV about getting ass on the side is back – The Affair!

The first is Lifetime’s Cheater’s Club, by the way. Honestly, it’s not even close.

But no, seriously, The Affair! It’s back! And nothing is the same! Well, okay, lots of things are the same. We’re still doing the different viewpoints thing. Noah still manages to somehow be the worst person in all of them, including his own. And someone is most definitely still dead, and it’s probably Scotty Lockhart, but we’re still not sure because there’s a giant sign hanging in The Affair’s writers room that says PRONOUNS ONLY. I mean, yeah, Scotty is dead. But at no point has anyone on this show said Scotty’s name in connection with Noah in jail. Even when Noah was arrested, Detective Whatshisnuts only said “you’re under arrest for murder.” Whose murder? Apparently not important at the time. This episode, he tells Noah “they don’t have enough evidence to prove you killed him.” Who is “him?” Can’t say! Like, probably Scotty, but maybe there’s a swerve and Noah just hit a Montauk paperboy, rushing home to supper. Maybe it was Alison’s son, travelling from the past to warn her mom not to date homicidal novelists, because it would retroactively save him from drowning. Does that make sense? No? Good! I’m SO glad this show is back. I’m still convinced it exists in multiple universes.

But anyway…yeah. That murder mystery is still happening, even though the murderer aspect of it isn’t much of a mystery. Let’s go over Noah’s point of view, which was so heavy-handedly pointing out he hit someone with his car that when he tells his editor “murder is salacious, it’s cheap,” I wouldn’t have been shocked if he turned to the camera and said “I would know, I’ve done it.” And then winked, all Noah-like. You know what I mean. Seriously, this season premiere itself started with a dream sequence of someone speeding down a Montauk road. Or…well they didn’t show any speed limit signs. The season two premiere started with Noah dreaming of driving down a Montauk road at an objectively dangerous pace, before careening into someone. Probably Scotty. But maybe Alison’s time travelling son. Do try and keep up.

So just a quick recap of where Noah is post-Montauk, but pre-arrest. He’s living with Alison at the Last House on the Left, and has to take the train into New York to see his editor. His editor who, by the way, thinks the ending of his book includes way too little murder, and way too much people with secrets talking. His editor would have hated The Affair’s first season. In between his editor and a divorce meeting with Helen, Noah stops by his old apartment to threaten his elderly mother-in-law with yet MORE murder, and to catch up with his sons who decided that between seasons they would get worse at acting. Seriously, if you didn’t laugh out loud, rewind, and then laugh again even heartier when Noah’s son yelled “I don’t want a new room!” and then smacked him in the face, you just stop reading now because I don’t want a soulless zombie reading my recaps.

Oh, did I not mention that the second viewpoint wasn’t Alison? It’s Helen. How did I forget this seemingly game-changing development? Because done this way, the differing viewpoints are pretty useless now. We are just getting the same half hour story, told slightly differently. That’s all it is, and it seems that’s all it ever was. Noah and Helen meet up with a lawyer, and here’s all the differences.

Following all these subtle clues I came to this conclusion: during a painful divorce brought on by adultery, the two parties may just have differing feelings about each other. Boom. End this show now, because ladies and gents I just figured it out. (For the record, this isn’t a terrible way to steer the show, but don’t set up an entire season with a two-sided murder investigation with an interrogation in the middle, and then be like “just kidding! People just remember stuff different!”)

So yeah, outside of that meeting Helen doesn’t have interaction with Noah, rendering the different viewpoints even more useless. She’s dating everyone’s favorite doucher Max, who most definitely doesn’t have his own view point. Actually I think we’re all dating Max after that full frontal dong shot that probably had HBO clutching their pearls in horror as they edited together the third all-female orgy scene for Game of Thrones’ next season. But Helen? Helen is hanging out, smoking a ton of pot in both vape and lozenge form, going to benefits with her mom, occasionally convincing her gullible-ass son Justin Bieber just walked into the kitchen. Whitney is still awful, if anyone is wondering. She wants to write about the time Cole (lol remember Cole?) went commando and pulled out that gun, even though Grandma thinks it was Noah. “He didn’t put a gun to my head, Cole did. She knows this!” Whitney yells.

Wait, is that…important? Are the barriers between universes breaking, and now not only are Noah, Alison, and Helen remembering things differently, but Whitney and Helen’s mother are too? DID I JUST SOLVE IT?

The Affair has begun again, elbowing aside Lifetime’s Cheater’s Club for best show on television about slinging some hot Dong on the side of your committed relationship.

To be fair, most shows on television, sooner or later, unpack the issues of an extramarital trysts, but The Affair put that part in the title so we’ll know what part of which slightly different story to pay attention to. (Hint:  It’s the part about Noah’s black friend Jordy using Google Calendars!) (JK it’s What Happened to Scotty?) (JK, I actually have no idea what this show is about, kind of like Burn Notice.) Ostensibly, a better name for this show would be The Murder, but I’m assuming the writers will save that kind of cheap salaciousness for the title of Noah’s book.

Which, by the way…is going great? Maybe Noah–our perpetual crybaby “novelist” and “antihero” who is, despite himself, becoming more likable with every sick #SteinbeckBurn delivered this season–doesn’t think so. Unless he puts the titular death back into Noah’s second novel, The Murder (working title), he won’t get the other fourth-fifths of his $400,000 second book advance.

Sorry, wait…what? Who is Noah, Lena Dunham? In what fucking world would his book–on pitch alone–warrant such a hefty commission? And why is Noah complaining when he’s got $80,000 to play with? This book deal scene is very funny because it seems to know how stupid it is, kind of like Lenny from Of Mice and Men, which is the kind of thing Noah’s agent would agree with.

Instead  of having the followup to his terribly-selling first novel be based on the (relatively) real life crime he will be arrested for sometime in the future (Donnie Darko’s Guide to Divorce, Back to the Printer! and Who Is a Afraid of Virginia Primer? are also GREAT alternative titles to this show), Noah’s rewritten his story to end with two people eating dinner, sharing an unimaginable secret (that I guess ISN’T murder?. His agent belittles him and threatens him with possibly not publishing it with the new title. And that means no money, which is problematic, BECAUSE:

Noah and Helen are getting a divorce. But even that seems to be going great, because the biggest fallout from this equanimous settlement is that Noah’s oldest son Martin is seeing a shrink and has tummy-aches. I guess he’s lost the taste for staging those elaborate Harold and Maude suicide scenes. Hey Noah, there’s worse things in the world than therapy for this kid. Like a sporty theater camp in the park with tics, or vaping by yourself in Washington Square park because your husband isn’t trying to gouge you in the divorce.

Man, even for a show about white people living in Brooklyn, this show has very low stakes.

Meanwhile, over in the future where Noah’s already been arrested, Helen hates having sex with Max, Noah’s former eiffel tower partner from college who went from being a banker (right?) and total coke-head to owner of the Greenpoint Hotel. I’m glad to see that the too-intense hello kiss they shared last season finally paid off, but Helen is not: she hates how douchey her new boyfriend is, because he’s too devoted, rich and nice to her mother. He does say horrible shit during sex, like “can you feel me inside you,” which is so, so perfect. Seriously, when did this show become a HILARIOUS COMEDY mocking the pretensions of its inaugural season? And more importantly, will this pave the way for True Detective Season Three: Coven?

The Affair seems to have given up on its more gimmicky leanings–sure, it still has that differing viewpoints thing, but now it’s in service of shading in character dimensions instead of confusing the plot, so, whatever– in favor of leaning into its archer meta-commentary on the dissection of a dissolving marriage. All that you really need to know about the new tone of the show is that Jeremy Shamos–Craig Kettleman of Better Call Saul–single-handedly sets it as a divorce mediator named Jeremy Kramos. (LOL why?) He’s actually a Saul-ish character himself, gleefully telling Noah and Helen “I love rookies!” and demanding that the Solloways congratulate each other on putting their marriage humanely to sleep.

And not, you know, with The Murder. 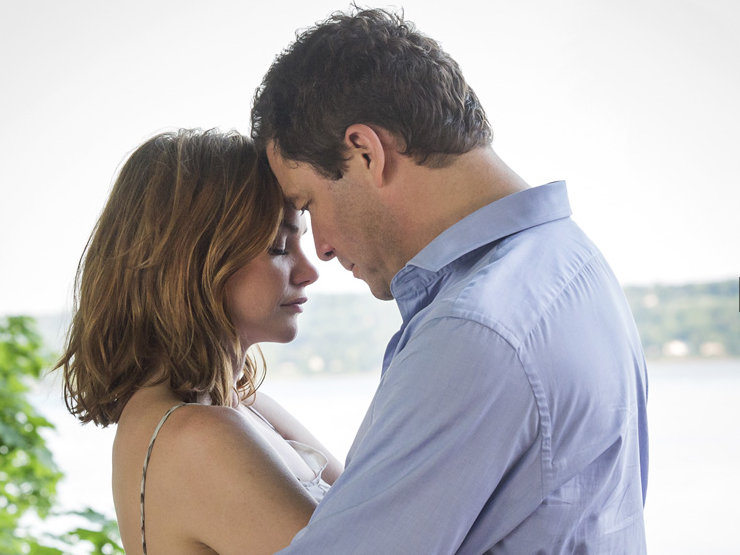