Our show this week begins with Baroness Ventris discussing the signs of pregnancy with her handmaiden. As this is really boring, action switches back to Castle Ventris, where Milus is berating an underling (that he halfheartedly screwed in the hallway during the pilot).

After Milus declares that the man is in his debt, we see Annora walking with Brattle and his stepson through town. Annora talks about some witch crap, then Brattle warns her of selling witch stuff in town. Annora retorts by talking about the dark nature of destiny or whatever. Brattle is wearing a lovely Ann Taylor Loft Blouse.

Brattle returns to Castle Ventris with his buddy from the old village, where Milus is in a plotting mood. He tells him the king is having religious relics imported, and that Brattle must murder the caravan carrying them and take them away. He seems to believe this will protect the shire from the king’s plot to partition it for some reason. Milus warns Brattle that his friend is too morally pure and will snitch on him someday or something (this guy is basically marked for death now). Brattle tells him he’s drunk on power.

Ser Piers Gaveston, better known historically as Ser Dumbhair arrives in Ventrishire. He curses “I hate the Welsh” in a snooty waiter voice.

Once inside, the nobleman with the exact same haircut as everyone who moved to New York to get into “design” in 2009 tells Baroness Ventris that if she truly is pregnant with a son, the kid will be seen as a legitimate heir and Ventrishire will not be partitioned. This is a problem 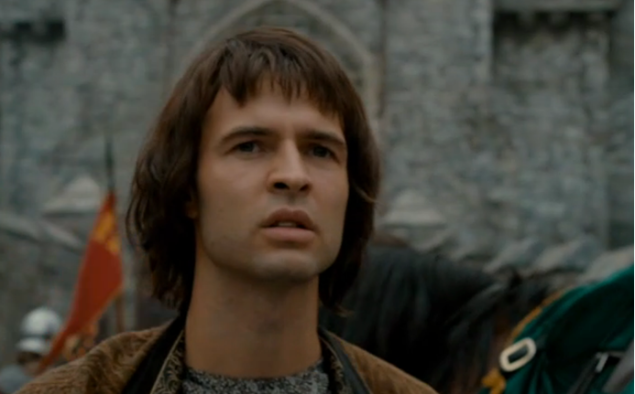 because she’s barren. The fact that she’s a baroness and also barren, and these words sound alike is what’s known as classical irony.

However, he’s doubtful that she really is pregnant. He elaborately describes how she would be killed once she’s found out to be lying. Now that that’s done, Gaveston returns to his chambers. Waiting in his bed are the two naked women that Milus seems to frequently employ. They seduce him and he jumps into bed.

Since the last thing we saw was sex, we’re immediately treated to violence, as Brattle and his friend kill the shit out of the king’s troops guarding the caravan, and set fire to the cart supposedly containing relics. However, the two hear a scream inside. Brattle pulls out a woman, half burned to death and screaming. There’s another person in there, but before he can reach in, the cart bursts into flames as the woman they did extract dies. He deduces this is actually Baroness Price, not a religious relic. Milus had them kill her so Baron Price could marry Baroness Price! Shit!

Brattle immediately returns and punches Milus. They go on to have a fight that’s mostly the two slapping one other on the ribs really hard and destroying furniture. Milus tells Brattle that he must do everything to protect the realm, innocent lady burning included. Brattle leaves after guards arrive. Milus’ two ladies show up, from whom he finds out that Ser Gaveston is gay. This is the problem with your plan hinging on a guy having sex with your friend so he’ll tell them information you need: too many moving parts.

There’s a short scene where the Baroness and Brattle talk. The Baroness says something about feeling as though she’s someone else. Brattle tells him of a healer he knows (Annora).

Milus and Ser Gaveston are now at dinner. We learn that Milus was born to no noble station. Gaveston commends his rise. Milus presses him on why he wants to partition the shire, to which Gaveston responds by dropping his pants. We don’t get to see if his dick also has a bowlcut, as he coaxes Milus to the ground to honk him off for more information. Before this can happen, he taunts Milus and in effect says he is too low class to suck him off. Milus takes out his class consciousness by returning to his chambers and beating up the underling he berated at the beginning of the episode.

Milus storms through the bowels of the castle and spurns the advances of his sex women. As he continues to storm, Gaveston appears. It’s revealed that they’re his half-sisters and working for him. He also likes to make out with them. I hate it when it’s really hammered into our heads that we’re supposed to root for a specific character in scenes like this.

Brattle and Baroness Ventris go to meet Annora at the dead of night. The Baroness bursts into tears when embraced by Annora, who comforts her. We cut to Brattle, who has a vision of his widow walking out of the sea and beckoning him. He goes to follow her and she falls into a hall, that the woman he helped burn to death crawls out of. He comes to as the Baroness grabs his hand.

Back at the castle, Baroness Ventris uses a concoction involving wolf piss from Annora to fake a pregnancy test administered for Gaveston. Gaveston is absolutely outraged when the test shows she’s pregnant, and storms off.

Baroness Ventris and Brattle are in the chapel. In the course of a conversation, Brattle slips up and calls her “my love”. She points it out and he apologizes, but she offers that she isn’t offended, and says she enjoys his company. This is as close as you could get to sexual harassment at this time in history, but instead of an intense sex scene, they hug each other for what feels like 20 minutes straight. Brattle’s friend from the village walks in and is horrified by the full contact hugging, and leaves in a fury, in total disbelief that his friend is hugging other people. Coincidentally, Brattle’s fake wife shows up with lunch and asks where he is. His friend completely rats on him, leading her to the doors of the chapel where she stares crazily at the unbridled static touching going on. 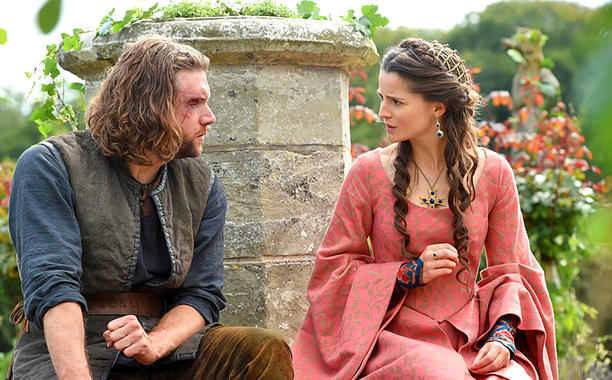