The Observer’s Wheels Up story was copied by two British newspapers without credit.(Photo: Facebook)

Today I joined a club in journalism that’s getting less exclusive every day: Those who’ve seen stories they’ve written show up in similar form in the Daily Mail without credit or attribution.

Yesterday, I wrote a story about a private plane operated by Wheels Up that had its door blown off mid-flight.

Today the Daily Mail published a story about a private plane operated by Wheels Up that had its door blown off midflight. But it does not credit either me or the Observer. 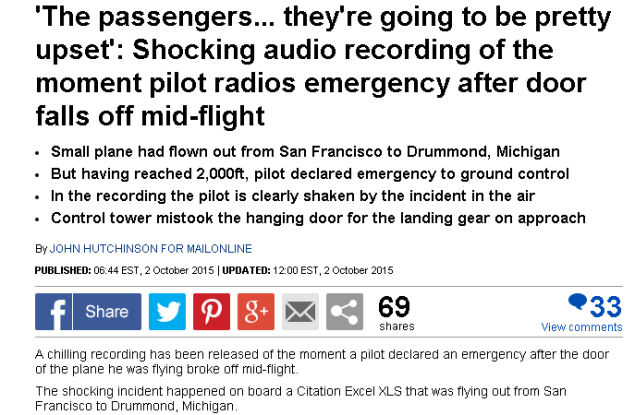 This story was originally written by a different John, but there’s no mention of him in the article. (Photo: Screenshot)

Of course, I cannot prove the Daily Mail did not stumble upon this story’s source video without having seen my story. But this is hardly the first time the Daily Mail, which runs  the most visited English-language newspaper website in the world, has been accused of lifting the ideas of other writers to feed its enormous appetite for content.

In fact, a former writer for the Daily Mail went public on Gawker—the lengthy accusation said that “ripping off the web” was essentially the business plan of the site (the Daily Mail recently sued Gawker over the tell-all).

Nicking stories from other newspapers actually seems to be a habit in the U.K.—after the Daily Mail published its plane piece, the Mirror, a rival newspaper, ran its own version of the story (again, originally the Observer’s) and did a write-up of its own, not crediting anybody.

Aggressive aggregation seems to be order of the day in British media—and this time, a Yankee went along for the ride.