I hope you like a version of The Good Wife where none of your favorite characters talk to each other and we jump to a new scene every thirty seconds, because the show is still very much laying groundwork for the rest of the season in its second episode, “Innocents”. I’m trying not to get worried yet, because it’s still so early on, but I feel like the writers have painted themselves into a corner where everyone has such disparate motivations and storylines that I’m concerned about how they’re ever going to come back together into the coherent show that I love.

The main plot points we’re working with this week are:

One of Alicia Florrick’s bond court cases — for the moment, we seem to have abandoned the inappropriate judge who’s punishing the Alicia’s clients for her inexperience by giving them higher bails.

Alicia looking for a new lover. I’m sorry, did I say “lover”? I meant investigator. This show is desperately in need of some sexual chemistry and they’re about to get it in the form of Jeffrey Dean Morgan as Jason Crouse.

Little Grace Florrick turning into a baby lawyer just like her mom.

And those are just the main ones, so hold onto your butts for a ton of exposition. We’re planting a lot of seeds that (I hope!) are going to get harvested later in the season.

The main deal with bond court is that Alicia is better at it now, enough so that Lucca “Seemingly Very Little To Offer In Terms Of Friendship” Quinn is handing off cases to her, which is how she ends up with the case of Erik Barsetto (Johnny Simmons), accused of vandalism at a museum, for attacking a piece of art with a hammer. And far from shirking responsibility, he says it was him, and he’d do it again. Intrigue! It turns out he’s the kid in the photos, which happened to be nudes and were taken when he was eight, by his artist mom, Phyllis Barsetto (Amy Irving), and he’s in the nude, which explains his reluctance to have the photos on display.

At first, Alicia is just trying to get the museum charge to go away, but once Nancy Grozier (GOD BLESS YOU MAMIE GUMMER) appears on the other side to represent the museum, Alicia decides to fight it, trying to get the exhibition shut down by insisting that Barsetto the Younger never gave consent to Barsetto the Elder to reproduce and profit off his image. And no sooner has she decided to do that, then as if drawn by the scent of money, Lucca shows up at her door demanding her cut, since she exerted herself so significantly by handing the file to Alicia. Two things about that: A. what are we supposed to like about this woman so far? and B. did everyone’s phone break when Kalinda Sharma (Archie Panjabi) left the show? All of a sudden we’re just showing up at each other’s doors?

Anyway, Lucca joins the case just in time for their consent tactic to get shut down; turns out, the Elder gave consent for the Younger to be photographed, on account of she’s the parent and he’s the child. Sucks. Alicia then thinks she’s on the right track to argue that these photos ruined her client’s life, by trying to locate Erik’s sister Wendy, but she gets dicked over by Amanda Marcassin (Trieste Kelly Dunn), the investigator she hired over Jason Crouse, whom she said reminded her of Kalinda. (Couldn’t resist one last dig at Archie Panjabi, I guess.)

Their next attempt is to put a real life pedophile on the stand, one who has actually…um…”gratified” himself with the images of Erik, to try to prove that the images are of a pornographic nature and can’t be shown (which, side note: I can’t believe wasn’t their approach from the beginning, because kid weiners???), but Lucca and Alicia were basing their case on a criminal statute when no criminal charges were filed, so they’re back at square one for the third time in the episode. Finally, everybody sits down at a table where Alicia and Lucca are trying to hash out how much money is owed to Erik because of child labor laws, and his modeling work being unpaid, when mother and son gently lay hands on each other across the table, and all is apparently forgiven. It isn’t explicitly stated, but it seems like Phyllis is going to give Erik the photos, and we’re all going to live happily ever after. However, Amy Irving is listed as a recurring character on Wikipedia, so it’s really anybody’s game.

Meanwhile, in an entirely different world that overlaps for a total of maybe fifteen seconds, Eli is stalking his prey, Ruth Eastman. He’s glad-handing Peter, and pretending to Alicia that he doesn’t mind being vetoed for the Chief of Staff position, and Peter is swallowing it like the big handsome oaf that he is. Alicia sees right through Eli’s behavior to the fact that she’s being used, and Ruth is so suspicious of Eli that she asks Nora (Nicole Roderick) to be his assistant again and keep an eye on him, but Peter just shakes hands and accepts his apology like he didn’t just betray this dude last week.

But for real, this was probably my favorite storyline this week, because we get to see Eli starting to circle Ruth, laying his trap and watching her (and the useless Peter) stumble into it. He mentions that she might like the movie It Follows, but refuses to tell her what it’s about, making Ruth find out for herself that it’s about a young girl who starts getting followed around by a creature that will kill her if it catches her, and ultimately drives her crazy because she never feels safe. Damn. Gauntlet thrown.

And the thing is, Eli is really good at this, because he gets exactly what he wants: Alicia tells Peter that not having Eli as her chief of staff is a deal breaker, and he capitulates, in what I’m imagining is the first of many times that he’ll choose Alicia over Ruth. Safely-staffed, Alicia agrees to go apologize to Frank Landau (Mike Pniewski), who offers her a seat on the election board, as long as she will vote “no” in the first election. Alicia walks out of the room with a seat on the board, although we don’t see the end of the meeting, and even though it looks like she accepted Landau’s demands, I have a feeling that when it comes down to it, she votes however she wants to.

Back at the office, Ruth hears the news that Landau is endorsing Alicia, helping her realize that Nora actually isn’t reporting back on Eli, and she’s more alone in this office than she thought. Especially after Peter comes in and makes her call Eli in congratulations, because he is a nightmare oaf who doesn’t understand what it means to push people too far. Just call him Peter “Bear-Poker” Florrick.

We also have this through-line of everybody looking for an investigator, because lest we forget, we let Kalinda slip through our fingers, and Robyn Burdine (Jess Weixler) is…dead?? No but seriously, where is Robyn, why aren’t we using her instead of interviewing this cop who won’t work weekends, money-obsessed Amanda, and smolder-y Jason? Jason and Alicia are bantering pretty much right away, with their sexual tension so thick that Alicia has to call Jason pretty much as soon as he leaves her apartment to tell him he doesn’t have the job. Giggle giggle thinking about each other naked.

But after White Kalinda bungles the case, Alicia fires her and gets on the horn with Jason again and starts trying to bid him away from whatever other agency is making him offers. It turns out to be Lockhart, Agos, & Lee, who are offering two and three times what Alicia is able to pay ($250/hour), only to have Jason come back and pretend like she’s actually holding her own in a bidding war. She ends up offering him $95/hour, and he takes it and turns down the larger firm, because apparently sexual tension and meaningful eye contact are worth $145/hour now and he’ll make up the difference in two shakes of a lamb’s tail.

And in fact, we already have indications that Jason will be a top-shelf investigator, since he was able to solve the case of Judge Dunaway and the Rumbly Belly. Turns out Ramadan is the culprit, as we have a strangely incongruent D-story this week where Dunaway has converted to Islam.

And finally, there’s the drama at Lockhart, Agos & Lee, where the associates have come to Cary to complain that Howard Lyman has been sleeping through every single meeting with the clients and then billing his customary 70% of the hours worked. Cary goes to bat for them, even though stuff is still weird with LawBro, who is lingering in doorways to remind Cary that “he’s totally not gay bro my only true love is the law lolol.”

After getting some pushback from Diane, who reminds him that all the partners take 70%, even when they haven’t earned it, Cary decides to take matters into his own hands, like some kind of idiot. He takes Howard to lunch and asks him to shift to emeritus status, and it’s like he flips a switch in his head, going from Dopey Howard who sleeps nude in his office and honks boobs to War Howard, who threatens to cut Cary’s balls off if he tries to push him out. And because apparently neither of them have anything better to do, Cary and Howard start Parent Trap-ing each other, moving up court dates (Howard) and getting each other to show up for meetings and embarrass themselves (Cary). It gets so intense that in a meeting with David Lee and Diane Lockhart, Howard blusters that either Cary goes or he does, and storms out of the room. As David Lee says, “Did he just issue the easiest ultimatum in history?”

I guess we’ll see next week, when we return to The Good Wife to see if Alicia and Jason kiss, whether Grace starts wearing power suits around the house, if Eli abandons all pretense and leaps across the death to gnaw on Ruth’s jugular, and if Lucca ever manages to wrangle any friendship qualities. See you then! 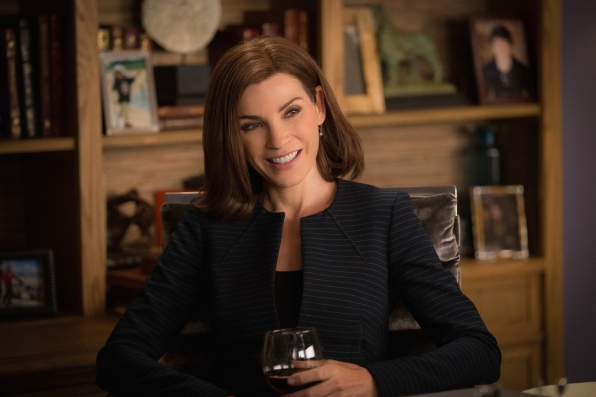