Welcome back to The Good Wife. Now with tinier offices, more embarrassing mothers, and 200% more elderly kissing. Now that we’re a little further into Season 7, the storylines have started to calm down a little, and in Episode 3 “Cooked”, we’ll be focusing our energies on the following plot points:

The ongoing battle between Eli Gold and Ruth Eastman.

Very doable! Let’s jump in. I’ve spent the last five seasons or so thinking that Howard Lyman (Jerry Adler) was one of my least favorite characters, but his resurgence lately has me questioning everything I’ve ever known, because they’re giving him great stuff to work with! This week he’s wanting to sue Lockhart, Agos, & Lee for ageism, since they’re trying to force him out to emeritus status, and he needs a lawyer. And who better to take on a law firm that’s forcing someone out, than Alicia Florrick, who had the exact same experience at the exact same law firm? Nobody, which is why Harold Lyman is sitting in her living room right now.

Except Alicia isn’t interested in exacting revenge on her old firm; instead she gives Howard a dose of real talk along the lines of “hey guess what, they’re right, you do nothing.” She encourages him to start working harder and keeping a log of the inappropriate things that are said to him. You know, like Cary Agos saying, “Someone had a good nap” when Howard announces he’s made progress on a case. Alicia doesn’t encourage him to start flirting with her mother­in­law, Jackie Florrick (Mary Beth Peil), but he does that anyway after encountering her near the elevators in Alicia’s building.

And turns out Jackie’s into it, so the two of them go on a date and enjoy an impressively passionate elderly makeout sesh. Good for you, Good Wife. And there’s even some overlap between this plot line and another one (imagine!), because Diane Lockhart convinces the other partners to give Alicia some of their overflow cases after she gets rejected as a mentor by a young intern who’s more interested in her boyfriend and a work­life balance than getting ahead in her career.

So it seems like everything is gonna be hunky­dory with Alicia and Diane again…until David Lee overhears Howard calling Alicia to tell her he’s changed his mind about the ageism suit (brimming with endorphins from his game of his tonsil hockey, no doubt). Except the only words David Lee hears are “ageism suit” and “Alicia”, and he goes rushing back to tell them the news, and Diane storms directly across the city to Alicia’s to tell her it’s off, it’s all off, and we’ll have to wait another week to see if these two can find their way back to being friends.

Meanwhile, at another complicated Chicago office, the war between Ruth Eastman and Eli Gold has escalated to a particularly aggressive round of musical chairs. Any time one of them wants to sit down, the other one withholds it. Oh and also, Eli’s new office is basically Cupboard Under The Stairs, a la Harry Potter. Ruth is demanding that Alicia make herself more available to the campaign, starting with an appearance on a cooking show called Mama’s Homespun Cooking, with her actual mother, Veronica Loy (the queen that is Stockard Channing). All I can say is yes yes yes.

So they go on, and it’s such a shitshow that we get a legit spit take out of Margo Martindale, because it becomes uncomfortably clear that Veronica has never cooked for Alicia in her life, and is much more interested in having an on-­air conversation about Peter Florrick’s indiscretions. I love this woman. Your move, Ruth.

And finally, in the main plot slot, we have Alicia and her newest bond court client, a Mr. Roland Hlavin (John Magaro). He’s accused of producing narcotics, specifically GHB, and he and his dealer, who was arrested at the same time and is being represented by Lucca Quinn (Cush Jumbo), are being offered either $300,000 bail or an exploding deal to turn on each other. One of them gets one year in jail, the other gets 25. So Alicia and Lucca run off to start fighting each other.

Turns out that Roland didn’t actually make GHB, he made something close to it that’s safer, because his brother died after overdosing on the original. So technically, it isn’t illegal, because it’s a synthetic that doesn’t (yet) appear on the Controlled Substances List. Also creepy Judge Don Schakowsky (Christopher McDonald), welcome back, we’ve missed you. Both Alicia and Lucca ultimately reject the deal, pleading not guilty, and looking for a dismissal of all charges, but their expert witness has trouble speaking layman­ese, and since the new drug (did I hear “snowball cheese”??) gets you the same high as GHB, it’s considered an analog drug and will be treated the same as if it were a chemical facsimile.

But they aren’t out of luck yet, because Lucca points out they’re in a Catch 22 situation: Lucca’s client can’t be prosecuted for buying an analog if he didn’t know it was one, and he can’t be convicted of buying GHB, because he didn’t. And it’s the opposite for Alicia: if her client thought he was making actual GHB, not an analog, then he is protected by the same legal loopholes, making it impossible to prove intent. Alicia presents these options to her client in that lawyerly way that shouldn’t be legal but technically is, and we cut to him testifying he had no idea he wasn’t making GHB, which is a lie that breaks down immediately on cross­examination, meaning Roland is now going to have to stand trial.

OR WILL HE. Baby Lawyer Grace Florrick (Makenzie Vega) calls her mom to tell her she looked into Roland’s background, and his claims about where he went to school, where he worked, and where he lives all fell through, so as far as she knows, he doesn’t exist. That’s really interesting and all, and wow, what a mystery, but what I’m more concerned about is all these phone calls between Alicia and Grace lately. Don’t they know that this is a world where if you want to talk to someone, you just show up at their door?? Does this mean that Julianna Margulies and Makenzie Vega are beefing, Kalinda­-style??

Anyway. Baby Grace is a millennial, so she runs Roland Hlavin’s photo through facial recognition software and there’s conveniently a picture of him standing around with FBI agents, so he might be one of those. Meaning that Alicia might be getting set up by someone trying to ruin Peter’s campaign, which she alerts Eli to right away, as well as grilling Roland about who he is and why he sabotaged her defense strategy. She tells him she’s going to ask to be removed for the case, but he threatens to tell the judge that Alicia asked him to perjure himself, and he has enough of a point that she backs down and stays on without any information from him about what his deal is.

Suspecting that Lucca might be in on the frame job, Alicia tells her she wants to sever their cases, which is a really great moment between them, I love their friendship, which isn’t cold and stilted at all LOLOLOL. And it turns out Alicia needn’t have tanked it, even, because Lucca had nothing to do with the sting, and it was never about Alicia, or even Peter at all. When Alicia threatens to come clean to the judge, Hlavin admits that he’s an undercover FBI agent targeting none other than…dun dun dunnnnn Judge Schakowsky himself. They think he’s dirty, so he’s going to be offered a bribe to dismiss all charges against Alicia’s client, and once he does, he’ll be arrested. Oh damn.

But Eli is still laboring under the delusion that this is about him somehow, so he’s wanting to make a bunch of calls to make sure the FBI isn’t sniffing around the Florrick Family. And apparently the only way to keep him from doing that is to break attorney-­client privilege and blow the cover of an undercover FBI agent?? So she does that, and very casually gives Eli a bunch of information it’s illegal for her to disclose, and makes me grumpy with not only the character, but also the writer, because it’s such a non­Alicia move and we’re not even gonna acknowledge that? In my notes I just wrote down “this seems wrong and bad.” Ugh.

But whatever, then we see the scene where the judge is being pitched on this bribe, with a bunch of golf talk mixed in with reminders about family ties and trading favors and friend smiles, and there’s no way that Schakowsky isn’t gonna go for this. I’ve been calling him out as a slimeball from the beginning (two whole episodes ago, aren’t you impressed??), and he definitely takes liberties with the law where it suits him. But when it comes down to it, in the courtroom, Alicia asks for a dismissal on the basis that the entire testimony used to convict her client is coming from his dealer, an unreliable witness who undercut his own testimony by changing his story. It’s actually a pretty compelling argument, from an outside perspective, so I’m convinced the judge is gonna take it.

But…he doesn’t. He rejects it, and Roland Hlavin (or whatever his name is) is super pissed, because he was building this case for two full years and he’s convinced Alicia tipped him off. Did she? NO IT WAS GODDAMN ELI WHAT DID I TELL YOU?? Oh my god, I’m so annoyed. Eli gave Schakowsky advanced warning about the bribe, so now he owes Eli one, which he’s going to cash in to get some leverage with Frank Landau (Mike Pniewski). Ugh everyone sucks, get out of here, shut up. But we’re supposed to believe that everything is okay again, because now the judge likes Alicia, and when it comes time to hand out caseloads, she gets the big pile and Lucca gets the small pile! Get it? Because she helped him avoid bribery charges! What fun! But Alicia gives Lucca a portion of her cases with a smile and a knowing nod, and they are back to being BFFs who have absolutely nothing in common and no chemistry. Guh. Here’s hoping that next week’s episode makes me less aggravated. Never thought I’d say this, but more Howard Lyman please! 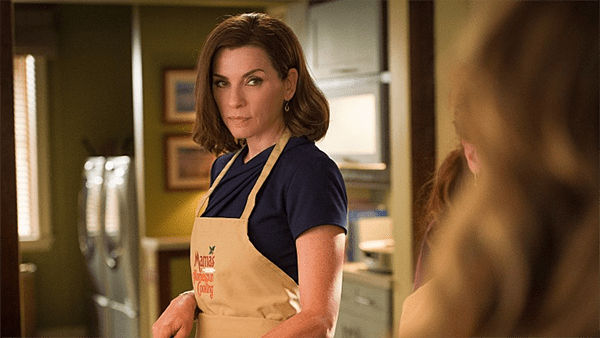