Season 7, Episode 4: in which The Good Wife thinks it’s an episode of Law & Order, and rips its plot straight from the headlines. Or, I guess I should say plots, because there were two this week that sound pretty familiar. Here are the main themes we’re working with.

And truly, that’s about it in “Taxed” this week. There are other secondary themes that snake their way in, but those are big topics to tackle, so everything else stays pretty pared down.

We get started by meeting Alexa Banner (Celeste Arias) in a video filmed after her death, where she explains her decision to end her life through physician-assisted suicide after her suffering from a brain tumor proved too great. Her family is trying to sue, but they’re being held at bay by Louis Canning (Michael J. Fox) and his devastatingly effective exploitation of his own medical condition on the other side. Enter Peter Gallagher as Ethan Carver, general counsel to Lockhart, Agos, & Lee client Reese Dipple (Oliver Platt), who wants Diane Lockhart to take over the case so they have a prayer of winning. So even though she’s pro-euthanasia, he wants her to take a stand against it, as devil’s advocate, to keep physician-assisted suicide from coming to Illinois. And if you, like me, were expecting Diane to turn down this request, then you’re underestimating just how angry Canning and his style of defense make her. She’s on board.

One thing Diane isn’t on board with, though, is asking Alicia to lobby Peter to veto the bill when it comes across his desk. But don’t worry, Cary will take care of that. In court, we learn that Alexa’s mother is the most upset because her daughter wasn’t informed of a brand-new, polio-based treatment out of Duke University that was announced the week before she died. Instead of being informed of the new treatment option, Alexa was provided with the drug cocktail that would end her life; she was denied hope. And just to add insult to injury, the defense trots out a witness who also had glioblastoma, but was able to treat and cure it with the new polio method, and is a little baby miracle running around.

Canning sees that he’s losing traction against Diane, who knows how to handle his dramatics in court, and offers a pretty sweet deal—$1 million, no admission of liability and a gag order. Carver turns the offer down flat at the mention of the gag order, and Canning pulls Diane aside to urge her to consider what that means: Dipple might be interested in raising malpractice insurance and discouraging doctors from truly assisting the terminally ill.

But Cary isn’t privy to this conversation, so he shows up at Alicia’s apartment (of course) to ask her to nudge Peter toward a veto, which he says would encourage the firm and Reese Dipple to welcome her back with open arms. She says she A) doesn’t want to ask Peter for a favor and have him ask one and return and B) is happy where she is, off in her alternate bond court storyline. Uh-huh. But that part doesn’t really matter, because the lurking Eli Gold has already heard the entire conversation and now knows that physician-assisted suicide is a hot-button issue he can use to his advantage.

Apparently with nothing better to do for the campaign than make Ruth Eastman’s life and job more difficult, Eli rounds up every family member he can and sic them and their opposing opinions on physician-assisted suicide on the Governor. They all come streaming into the office, ready to argue, and Eastman is like, “OMG OMG this is all Eli’s fault, he’s messing with me,” and Eli cackles and rubs his hands together behind his door in his tiny broom closet. But Peter has zero interest in this ongoing skirmish between his two best people, and tells Eastman to fix it and, y’know, focus on getting him elected president. If you don’t mind. So she sits down with both Jackie and Grace and tells them they both have her ear and Peter’s, and they’re a necessary part of the campaign. It’s a tactic that really seems to work, bringing Eastman closer together with two of the top ladies in his life. Advantage Eastman.

But it’s a little unclear who has the advantage in the courtroom. Even though Lockhart got a leg up by getting the doctor to admit that he didn’t give Alexa the information about the Duke study because he didn’t think it would make a difference, a choice she should have been able to make herself, Carver has acknowledged that this case is indeed about insurance malpractice. Diane argues with him over it, but at the end of the day, the only promise she can get out of him is that this won’t be a Trojan horse, designed to sneak in before people know what’s happening; this will be about this case alone, not all cases. It’s not much, but it’s something.

The case pings back and forth a bit, with Alexa’s husband testifying she was beyond hope, Diane discovering he had a girlfriend he began dating a month before Alexa’s death, and then, finally, a one-word comment on the Good Wife version of Reddit: Alexa wrote the word “Garbage!” in response to a post about the Duke study, proving she knew about it and was able to make an informed decision that it wasn’t something she was interested in holding out hope for. And bing bang boom, Diane Lockhart loses her case, but she didn’t really want to win it, so maybe that’s a silver lining? I hope so. I like Diane.

Meanwhile, in our only other plotline of this episode, we follow Alicia through the ongoing travails of bond court, where today the bond lawyers are competing to see who can rack up the most poundage, clearing perps by weight. Alicia doesn’t like that of course, because how could you, this place is the worst, and the writers are honestly getting a little heavy-handed about it, in my opinion. Like today, for example, we see bond attorney Bernie Burkovitz (Rob Bartlett) lie to his client who’s in on a shoplifting arrest, telling her she can accrue more charges if she doesn’t take a plea. Alicia alerts the woman, Maia Sachs, played by Marsha Stephanie Blake, who promptly wants to jump ship with Burkovitz and get Alicia as her attorney. Whoops.

This pisses off Burkovitz, and it pisses of Bad Judge Schakowsky, who’s back again after last week’s failed sting and very excited to punish Alicia and her clients for Alicia caring about them too much and slowing down the system. In this case, Ms. Sachs is refusing to take a plea, because she’s saying she didn’t commit the theft she’s being charged with, but Bad Judge will have plenty of time to punish her later. For now, he’s focusing on punishing Alicia, by redistributing her cases to the other lawyers. Bond court, baybay! It’s not supposed to be fair. He did finally give me a reason I can understand for the way he is, though, by pointing out to Alicia that because she’s taking longer with this one client, a whole roomful of people won’t get to see their kids that night. That does really suck. I almost understand why he’s pushing the “plead or jail” thing so hard. Almost.

But anyway. Now that Alicia has a client, she can afford an investigator, so three hours of Jason Crouse tension, coming right up! They interview Maia’s mother, Dana Sachs (Brenda Pressley), who confirms she got the sweater for her daughter, and says that Salvatore’s, the store where she purchased it, is biased against black people, and does anything it can to discourage them from shopping there. And in fact, Jason goes to check it out and actually witnesses racial profiling—an African-American woman is browsing, the store spotter points her out to security, he approaches and arrests her, all without her ever stealing anything. And would you look at that, she shows up in the fishbowl with all the other perps the next day. She’s assigned to Don Weingarten (Daniel Abeles), but she also wants to switch to Alicia. Ruh-roh. Bad lawyers are gonna turn into mad lawyers!

But luckily for Alicia, she’s able to call Jason as a witness for her new client, the newly-arrested young woman also from Salvatore’s. Unluckily for Alicia, she seems to have failed to do even the basest of background checks on her own investigator, so discovers on the stand as he’s being questioned by Matan Brody (Chris Butler) that he’s been disbarred, investigated and gotten in trouble for beating up a judge. Wonderful. But she still won’t back down, which means more and more perps are asking for Alicia as their bond lawyer, because she’s actually going to bat for people. Funny how that works.

And with so many people switching over, Alicia is left with a long list of those who were arrested at Salvatore’s for shoplifting, of which a disproportionate number are black. Armed with this information and the faint whiff of a class action, Alicia shows up at Salvatore’s and demands the video tape of the supposed thefts. She gets it, and Alicia and Jason have themselves a little movie night at Alicia’s place, gathered around the laptop to watch the footage. I’m honestly shocked Alicia didn’t make popcorn.

And she really should have because—plot twist!—a theft really did take place at Salvatore’s! It wasn’t that day, and it wasn’t perpetrated by Maia Sachs, but instead her mother, Dana. The same mother who said she could vouch for the sweater being a gift, and who put Alicia on the scent of racial profiling at Salvatore’s. We watch her slip the sweater into her bag in full view of the camera, explaining why she never had a receipt for the purchase. She really did steal it, which is kind of a messed up message to include in a Good Wife episode. Since racial profiling is so prevalent in the real world, why remove the credibility of the character who brought it up in the first place? Especially because Maia was so shocked and keen on protecting her mother that she insisted they drop the case altogether, taking the plea. It just seemed like such a productive, intelligent storyline to bring up, and I felt like the way they negated that idea so soon after introducing it really undercut their point, and let the air out of my sails.

But, oh well. This is bond court, after all, where everything is awful and even Lucca Quinn is telling Alicia to get gone and “shake the trees for better paying cases”. And instead of taking this as the clear opportunity that it is to cut ties with the most stiff and wooden friendship on the show, Alicia extends an olive branch—“wanna do it together?” No, no, please God, no. Can’t Alicia have the same job for five episodes in a row before we start shaking things up again? Sigh. See you next week. 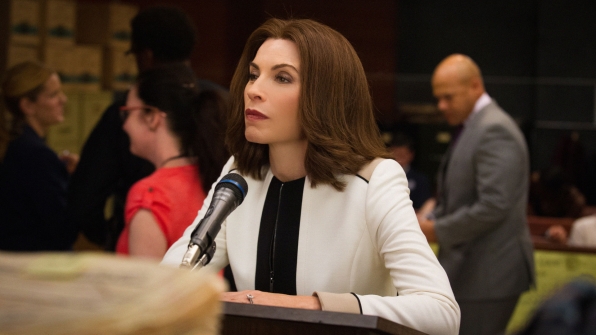