Just as we feared, Thackery fell off the wagon by taking dancehall girl Kate’s lead with the turn of the century speedballs.  He’s even getting creative with his habit by cooking the heroin and cocaine combo into a powder and snorting it, thus passing his regular track mark inspections with flying colors. It would be great if people could actually conquer their addictions just by tying ten Boy Scout knots while being carted around the Atlantic Ocean by a disgruntled colleague. It’s a hell of a lot cheaper than rehab, no doubt. Unfortunately, that’s not how the world actually works. The irony is that the bumps Thack is doing off of his scalpel are probably restoring him to enough of his former glory where he’s able to focus some of that pharmaceutical energy into his research into the cause of addiction.

His first big break in his research comes at the passing of the heiress of a copper mine and one of the fellow patients from his stint in the asylum. We’re treated to an unflinching shot of her foaming mouth after a heroin overdose, because God forbid the body horror be confined to the surgical theater. Now that the young woman has passed on, Thack convinces her parents to donate her body to his research after pointing out that the well-to-do mom is clearly an addict herself. Hey, it takes one to know one.

If Thack can’t save himself, then at least he’s going to try and save Abby, the ex-girlfriend who contracted syphilis from her garbage fire of a husband. Last season, Thack grafted skin from her arm to sculpt a crude reconstruction of the nose that was eaten away at the disease. Now, Thack reunites with her directly after another filthy, back alley romp with the dancehall working girl. In addition to his crusade to solve addiction, now Thack is aiming to cure syphilis and enlisting Dr. Edwards’ help to do it. After finding out that syphilis can’t survive under heat, it looks like there might be a second use for that expensive fever cabinet Thack was bitching about afterall.

Ever since her dad showed up, Lucy’s demeanor has become more hard and severe. She’s curt and taciturn as horndog Henry Robinson follows her around the hospital. It looked like Lucy was going to become a humorless Bible thumper as a result of trying to get closer to her father. For a moment, it seems like she achieves that as he welcomes her into his arms when she confesses her drug-fueled Dr. Thackery fuck spree in the warmth and safety of his congregation. However, that was all for show. Behind closed doors, he takes a break from counting the collection basket proceeds to thoroughly thrash and slut-shame his daughter. You can rely on Lucy’s dad to consistently deliver the most disturbing scenes that don’t take place in the operating room. His scenes are a good argument for never going to church.

Over at Mt. Sinai, Bertie Chickering is the odd goy out. Being the newbie, he’s not allowed to get his hands bloody in the OR and is instead restricted to mundane lab assignments. However, he doesn’t seem to mind as he’s been utterly enchanted by manic pixie dream journalist Genevieve Everidge. Or, should we say Esther Cohen. However, given the anti-Semitism of the time, Esther found that an anglicized byline is less distracting, for lack of a better word.

If she looks vaguely familiar, it’s because she was one of the patients nodding off on the couch in Thack’s asylum in the season opener. Well, she was pretending to nod off as she was actually writing an exposé on the place, the same article that absolutely tickled Bertie in episode two. And now they meet cute on Bertie’s first day of work and the young Dr. Chickering is all “Nurse Elkins who?”

It’s the beginning of an adorable courtship where she asks him out (progressive!), they flirt while walking through a sideshow, taking in the sight of conjoined twins, and a co-worker advises Bertie to go hit up a brothel to acquire the necessary experience in order to sufficiently please a woman. It’s like a fairytale.

Speaking of brothels, Barrow is clearly getting played by a sex worker who is going to use him to buy her way out of Ping Wu’s sexual slavery. When he’s not skimming off the top of the new hospital’s construction budget, he’s fulfilling his role as the old timey version of the guy in the strip club who thinks the dancers actually like him. He’s like the Layne Price of The Knick, without the charm and inherent likability.

Sister Harriet is still in the clink and things are still looking grim. In a tender, post-coital moment, Cornelia tries to ask her husband for the money for Harriet’s lawyer, only to get shut down and told that she’s forbidden from even associating with the ex-nun. Cleary tries shooting his bum prizefighter up with coke in order to give him an edge in a match only to end up inadvertently signing the kid’s spontaneous death warrant. The kid collapsing the moment he steps into the ring would have been funny if it wasn’t so grim.

Okay, it was funny in a gallows kind of way.

Things are still grim for Gallinger, but it’s hard to feel bad for that guy. His baby-killing wife is still a fragile basket case and the gossip over her mental state has actual repercussions for her sisters in that it’s preventing them from finding husbands. Plus, Eleanor’s more lucid sister looks at Gallinger like he’s lunch. There’s no way those two aren’t having sex by the end of the season.

Gallinger glumly accepts the fact that his wife isn’t anywhere close to presentable, so he goes off to his Penn med school alumni dinner alone. He’s already stewing over the fact that Thack repeatedly passes over him to work with the much more accomplished and innovative Dr. Edwards, so he’s already pretty receptive when his old classmates are decrying the presence of Jews, negroes, Italians, and any other non-WASP. This is where Gallinger gets introduced to the concept of eugenics and the audience gets introduced to an all-consuming sense of dread. It’s not bad enough that Gallinger is already a racist who looks like he jumped off the cover of a Hitler Youth recruiting pamphlet, now he’s presumably going to marry that horrifying ideology of who should be allowed to reproduce with his own surgical skills. There’s absolutely no way this ends well.

Also, did you know that Dr. Edwards has a wife? Or he had a wife back in Europe? Yeah, he has a wife. Her name is Opal. She’s here now.  She’s really pissed off.  Her presence is probably going to throw a monkey wrench in the fact that Neely wants to start sleeping with Algie again.

She’s here. She’s mad. I guess we all have to be okay with it. 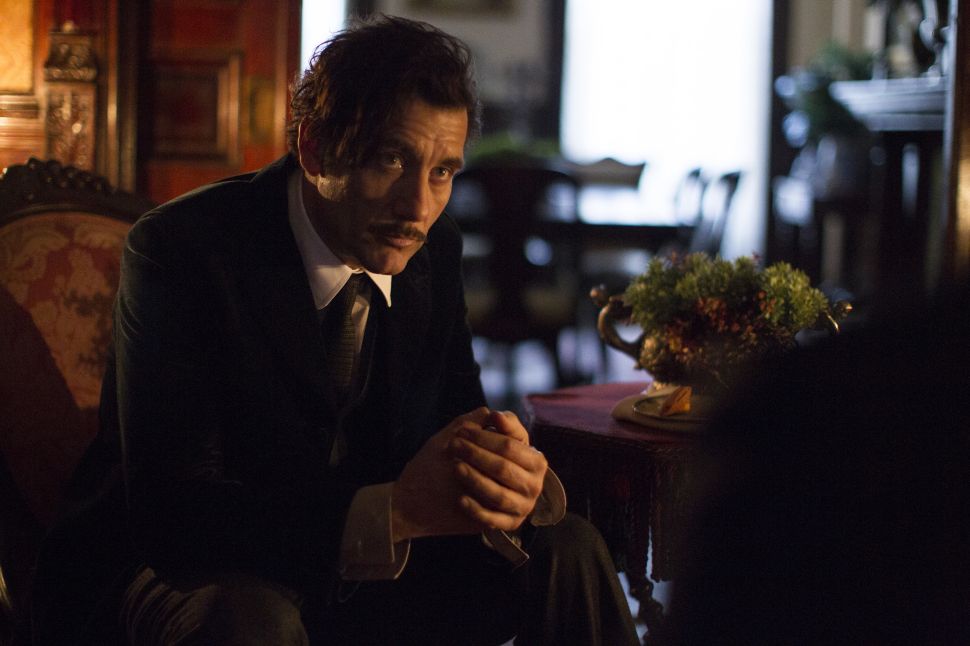